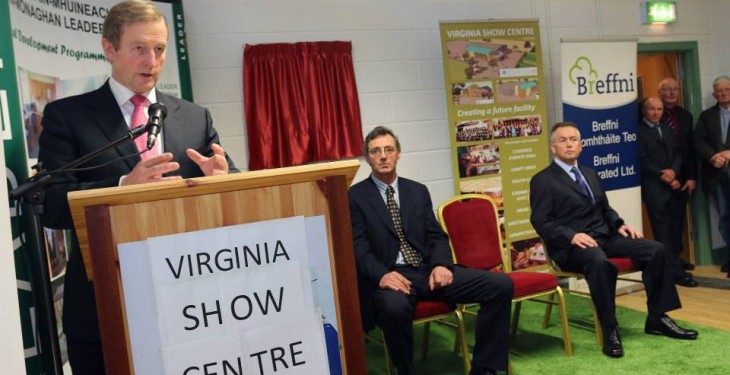 An Taoiseach Enda Kenny at the Virginia Show Centre launch.

The 32nd celebration of the Baileys Champion Cow will be centre stage at the 2015 Virginia Agricultural Show which takes place on August 19, 2015.

And it will see Baileys celebrates its 40th birthday this year and the Virginia Show will host the Baileys Champion Cow event for the 32nd year running.

According to Kathleen Duffy, Press Officer of the Show Centre, agri-tourism is much to the forefront of Virginia’s plans.

“We now look to the Centre being the catalyst of development of agri-tourism and local food, after all Virginia is only an hour from Dublin and 45 minutes from Dublin Airport,” she said.

She also spoke of the numerous events that continue to take place at the Show Centre outside of the Virginia Show such as the Windmill Vintage Event and the Pumpkin Festival.

Baileys, she said, has grown in the past 40 years from bringing 200 gallons of local cream to Gilbeys weekly for production. Today, Baileys sells 82m bottles of Baileys every year around the world.

Kathleen said the Virginia Show was “honoured to celebrate this by having the all-Ireland Baileys Champion Cow sponsored by Glanbia Ingredients and Diageo for the last 32 years and long may it last”.

Last years show attracted 15,000 people on the day and the winning cow, Dalevalley OTI J Lulu, was bred and exhibited by Eugene and Sean Murphy, from Co Cork. No stranger to the Virginia show ring, it was her second Bailey’s Championship in four years.