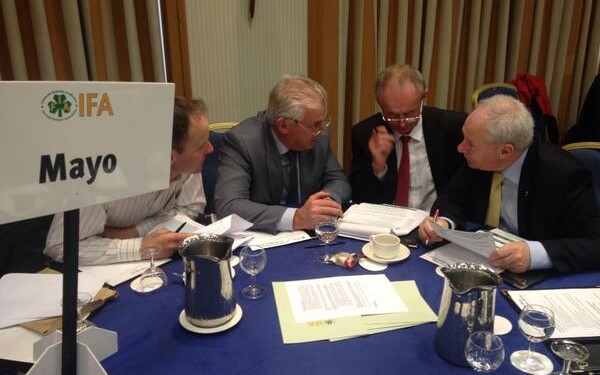 Advertisement
Government support for farmers is key for economic recovery that will drive export growth and job creation. This is according to John Byran, president of the Irish Farmer Association (IFA) in its pre-Budget lobbying session yesterday.
.
In a clear warning to the Government, the IFA President said the Minister for Agriculture Simon Coveney TD must deliver investment for the sector in this year’s Budget by reversing the trend of disproportionate cuts to farm schemes. IFA members across the country met with Oireachtas members yesterday in a pre-Budget 2014 think-in.
.
“Total funding for the agriculture budget has been reduced by a greater percentage than any other major Government department,” he said. “Since 2008, total funding for agriculture has been cut by 41.2 per cent, compared to an average reduction across all Government departments of 12.6 per cent.
.
“Despite a difficult economic environment in our main export markets, there has been an increase in food exports of eight per cent during the first half of 2013 and jobs in the sector have also increased. This comes at a time when Ireland is experiencing a general fall in manufacturing exports.”
.
However, farming remains a low-income sector, and the importance of farm schemes to farm income and production must be fully recognised in this year’s Budget, he added.
.
“A combination of dreadful weather conditions that continued into spring 2013, soaring input costs and the resulting fodder crisis impacted heavily on profitability and output at farm level.”
.
In addition, the impact on farm incomes from success budget cuts and cuts to farm schemes in particular is challenging the viability of thousands of low-income family farms. Cuts to farm schemes impact directly on farm income and have a negative knock-on effect on production decisions on-farm, he concluded.
.
IFA farm business chairman Tom Doyle said the Government must also retain taxation measures that improve competitiveness and encourage investment and restructuring in farming.
.
“In particular, the retention of the 90 per cent agricultural relief and capital acquisitions tax thresholds and the extension of long-term leasing incentives are crucial for land mobility. We also need to see the removal of anomalies in the income tax system that discriminates against the self-employed. Any increase in PRSI must be voluntary.”
Agriculture Breaking News Department of Agriculture Government IFA
Loading Next Story