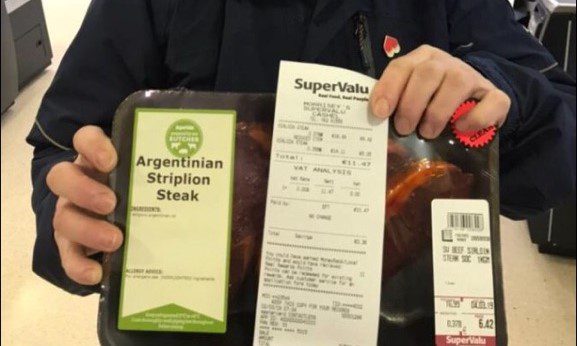 Members of the Irish Farmers’ Association (IFA) were in SuperValu in Cashel, Co. Tipperary, this morning (Saturday, March 2) to raise concern after a product labelled as ‘Argentinian striploin steak’ was discovered for sale on the shop shelf.

Chairperson of South Tipperary IFA, Erica O’Keeffe, said: “Local farmers were shocked to find beef labelled like this in a store in Tipperary.

“There is no Bord Bia Quality Mark on the product or any other information about the source of the beef.”

Commenting on the matter, the IFA’s president Joe Healy said: “While SuperValu is claiming that the Argentinian in the title refers to the sauce; IFA is insisting that Musgraves – SuperValu’s parent company – makes an immediate public statement on the matter.

“Beef farmers are going through an incredibly difficult time and the very least we would expect is that all Irish stores would stock only Irish meat,” he said.

A statement issued by Musgraves in relation to the incident read: We have confirmed that the beef in both cases is 100% Irish.

The product label, in this instance, may have caused confusion. SuperValu has a long standing commitment to Irish farmers and 100% of our SuperValu branded beef is Irish.

In other IFA news, the national farm lobby group is currently seeking submissions in respect of its beef review which is being carried out by former chief economist of Bank of Ireland, Jim Power.

The review, which aims to “bring more transparency to the beef sector”, will explore a number of areas including: Common Agricultural Policy (CAP) direct payments; supply chain; beef price index; feedlot specifications; and oversight which will examine the effectiveness of department inspectors and controls in factories on classification, trim, weights and prices. 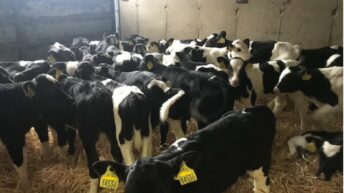