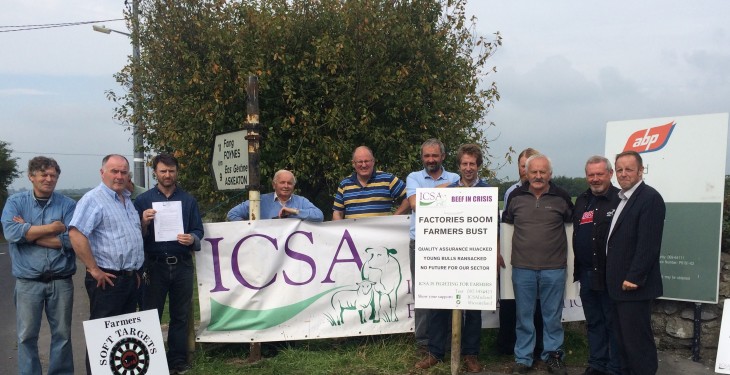 “The protest was organised at short notice in order to highlight the anger of our members regarding the current crisis within the beef sector,” ICSA General Secretary Eddie Punch said.

“A letter of protest was handed in, which related all of our current concerns and the absolute lack of action from processors in responding to these issues.

“These include the fact that returns incurred by Irish beef farmers have fallen by €168 million during a time when UK retail beef prices have remained unchanged plus the fact that the current 30-month age restriction on cattle is totally arbitrary and serves no purpose other than making farmers very weak sellers.”

Other issues referred to in the letter include the reality that only 25% of Irish cattle receive the current quality assurance bonus, despite the fact that 90% of all animals slaughtered are registered under the scheme. The recent changes regarding the acceptable weight and age specifications for young bulls were also highlighted.

“The management at the plant did not want to engage with us at all. This was a protest: not a picket. All farmers wanting to deliver cattle into the plant this morning were hot impeded in any way. It was encouraging that a number of farmers, who were not ICSA members, also took part in the protest, during which leaflets were handed out to members of the public and other farmers. The overall response that we got from today’s event was extremely positive.

“We now intend organising a series of similar lightning protests at venues across the country.”