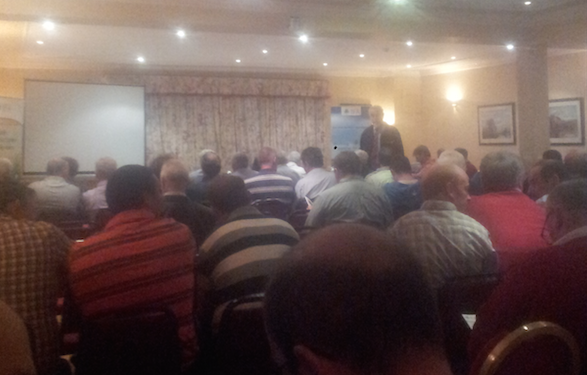 Beef farmers were told at an IFA meeting in Roscommon last night that the current problems facing the beef industry could pale into insignificance should a future trade deal between the EU and the US be signed off.

The comments were made by Luke Ming Flanagan MEP, who told the packed room that ‘Hell is on the way’ if certain trade deals go through. “In the last 24 hours in the Agricultural Committee in Europe. I sat and I listened to a presentation on the potential effects of TTIP which is an agreement which is being negotiated between the EU and the US at the moment.

“It was made quite clear by the people who presented to us that Ireland would be one of the most negatively affected.”

He said his worry is that the Goggles and Microsofts of the world will get preference from Simon Coveney’s mates in Fine Gael and they will throw such things with weight onto the scales. “While now they might say it’s disastrous for Irish farming and disastrous for the suckler area and disastrous for beef,” he said the scales may be tipped in favour of multinationals rather than Ireland’s beef industry.

“I would be very worried that in a few years to come they will go ‘a well having balanced the whole thing out we had to sell you out’.” He warned that while things are bad now they may be a lot worse in the future.

“It was mentioned that we have to look at this in the long term. If you think you have a problem now, ye have hell on the way if this happens”

Flanagan also question the IFA as to what has led to the change in tact from the IFA in their campaign against the multiples.

“In November of 2013, at the Agricultural Committee in Dail Eireann, I asked the then IFA President John Bryan if he would take on the multiples and he told me that he was warned by an executive from Tesco not to rock the boat because there was a €300m market there.

“Why did you decide to rock the boat, which I welcome, and do you think you have left it a bit late?” he asked at the meeting.