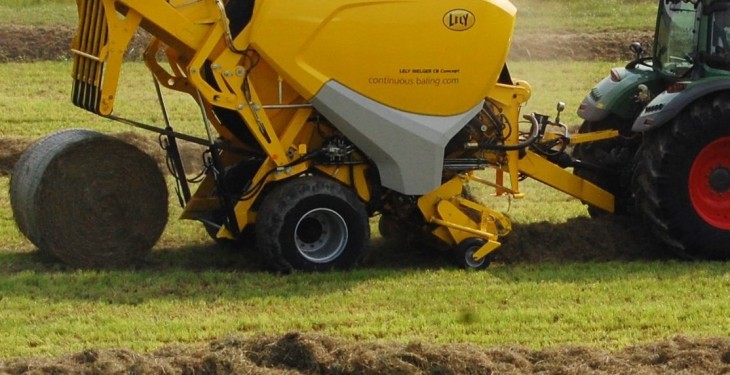 At the heart of the baler – which was developed jointly by Lely and its American business partner Vermeer – is a new technology platform allowing a fresh bale to be started as the net is being tied around its predecessor in the chamber. The set up is such that the driver can keep making bales without stopping. Lely is claiming that the new system will allow farmers and contractors to make between 110 and 130 bales per hour. What’s more there is no pressure drop, whatsoever, during the bale making process.

This ensures that air is continually forced out of the forage as every bale is made, thereby enhancing forage quality, the company says. The baler has a minimum 170 horsepower requirement.

Speaking at the launch, which was held at Lely’s headquarters in the Netherlands, company CEO Alexander van der Lely said that the new baler addressed three key requirements for livestock farmers: the production of quality forage; a significant increase in the capacity of a baling system and a commensurate reduction in production costs.

“Our new baling technology delivers higher levels of operator comfort. There is also less wear and tear on the tractor. As a consequence, the operator can concentrate on making best use of his or her time.

“These are challenging times for farmers. Input costs are increasing while commodity markets continue to demonstrate extreme volatility. As a result, producers must concentrate their efforts on finding ways of becoming more efficient. At Lely we are totally committed to making the attainment of this aspiration a reality for all our customers.”

The continuous baling system was launched under the Yellow Revolution banner, a strategy which underlines the significance placed by Lely in the new technology.  The unveiling this week constitutes the ninth Yellow Revolution launch event. Lely has confirmed to Agriland that the new baling system will be available commercially in about two years’ time.