Latest sheep market reports from the IFA outlines that its members report the lamb trade steady. Factories are said to be paying prices of €4.60/kg-4.65/kg for lambs this week. Cull ewes are trading at 2.70/kg.

According to Bord Bia the sheep trade remained steady this week on the back of solid demand. It said little change was reported in trade across our key export markets in recent days.

Live sheep exports have slumped by over 72% in July, due to the absence of Libya from the live Irish sheep export market.

Declan Fennell of Bord Bia said this is largely down to the absence of live exports to Libya due to political instability in the market. “In July 2014, live exports are back by 27,164 head, equivalent to 72% drop when compared to the same period in the previous year.” In 2013 some 57% of the sheep shipped live farm Ireland went to Libya.

According to Bord Bia in Britain, the trade continues to remain under some pressure. The SQQ live price for new season lambs in England and Wales was making the equivalent of around €4.62/kg dw towards the end of the week.

In France, Bord Bia reports that demand remains slow as the holiday season continues which sees many restaurants close in August. There also continues to be strong volumes of UK lamb on the market. However the return to work and the re-opening of schools in the coming weeks is expected to help the trade. The Irish Grade 1 Spring lamb price was making around €4.83/kg (inclusive of VAT) during the week. 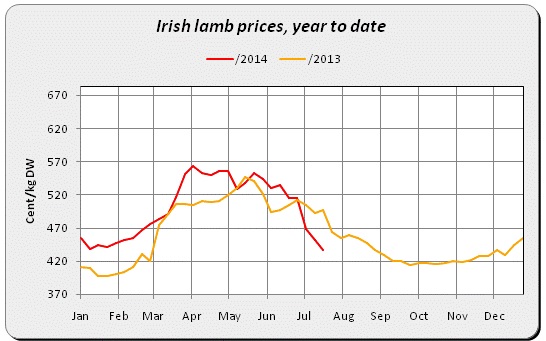