‘I didn’t put everything on hold’: Power of resilience after the unthinkable

The power of – and need for – resilience following farm accidents was underlined in compelling terms at Embrace Farm’s conference yesterday, Thursday, April 25.

The conference among other aspects, featuring experts and panellists across the farming industry speak on the day, saw a number of farm accident survivors tell their stories and underline the journeys they travelled to get to where they are today.

Kevin McGarry, who lost both his legs from above the knee and suffered burns in a scrambler bike accident in New Zealand, and now runs his own farm in Co. Roscommon, detailed his challenges in recovering and dealing with the aftermath of the incident.

Speaking in the first of the conference’s ‘fireside talks’, Kevin explained: “I’ve been very lucky since the accident; I’ve had no real pain or ongoing chronic pain; it was mostly burns that I suffered. 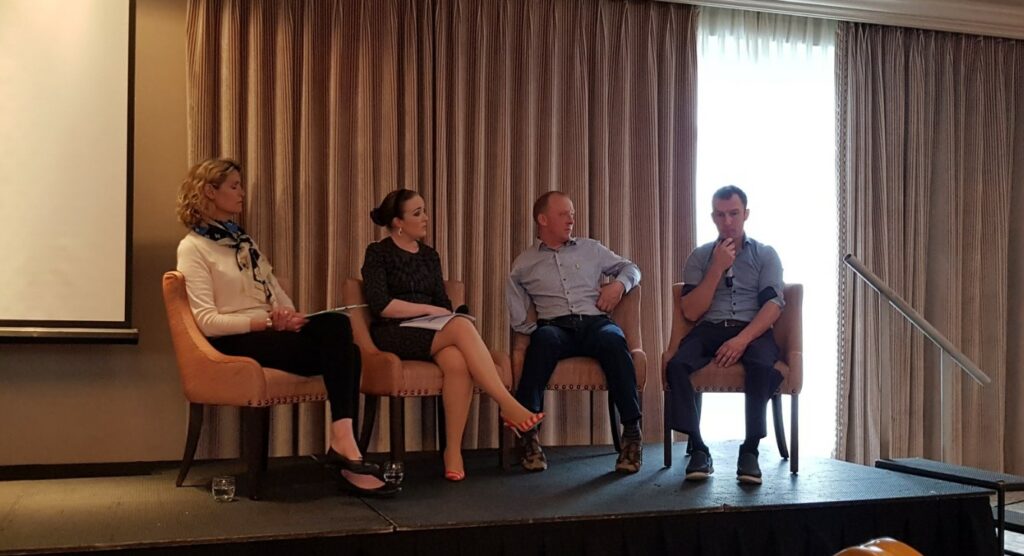 “What I have found mostly since the accident is, and what I’d imagine a lot of people in this room are going through since their traumas is the ongoing battle, not just physically but mentally.”

Referencing a metaphor used by MEP Mairead McGuinness in her opening address to attendees of farmers being careful not to “stretch the elastic band too tight”, referring to putting themselves under too much pressure, Kevin said:

“I know for a fact that I am constantly stretching the elastic band too tight in probably every way it can be stretched.

“I’m farming now in Roscommon in my own right; I bought a farm and am probably trying to push that farm to its absolute max. I’m pushing everything I can. I’m pushing it financially and physically.

I suppose, while the accident in itself was traumatic, we got over that and moved on – but the 10 years since the accident have been equally as trying and as testing all the way through.

Kevin studied agricultural science in UCD following his return from New Zealand: “All the way through UCD it was never fully clear that I would ever get back to farming. The whole idea of UCD was that I’d have an inroad into the industry if I wasn’t physically able to go back farming.”

“I probably got one very good piece of advice early on in New Zealand from a psychologist over there; she said: ‘Don’t wait until you’re fit to do something – continue on with your life all the time’.

“So that’s kind of what I kept doing; I didn’t put everything on hold until I was back walking and, possibly or not, able to farm again. So I just continued on a path and just let the road go where it went and followed on.

“I didn’t really start walking until probably eight years after the accident before I was back walking with any sort of comfort.”

“By the time I got to third year in UCD, I was walking good enough that I was able to go back to New Zealand and go back managing a dairy farm again. So probably the last bit of my rehabilitation went very quickly.

The eight years before that were very slow. But just because of those couple of words that the psychologist said to me I never really dwelt on the pace of the recovery; I just let it happen and continued on.

William Sayer, who lost his right arm in an accident with a PTO shaft when he was 12 years of age, also underlined the significance of positive thinking following the unthinkable.

After being rushed to Altnagelvin Hospital, Co. Derry, after the accident, with fears over whether he would survive the injury, William gave a powerful account of the night in question.

“That night I arrived in the hospital, I thought I was the worst off; a young girl going to a nightclub in Letterkenny opens the car door, takes the arm and leg off her; she’s leaving to go to Belfast.

“I’m in the middle bay with one arm. And on my right hand side there was a farmer lying as well. He’s fallen over the face of a silage pit and he has spinal injuries; he can’t feel from his waist down.

And I’m thinking ‘I’m not so bad’. I was taken by ambulance to Belfast where I received surgery.

Explaining how his father had paid a lot of money to enter farming in the years before his accident, with the intention being for William, as the only son, to inherit it, he outlined the guilt he had felt over the accident.

“I was told by my father what not to do and I disobeyed him in some ways.”

Later elaborating, he explained “in some ways I felt I’d let him down as well because his plans were shelved”.

“But my faith has increased through it and I thank God for that, because when my father bought the tractor from Jim Dinsmore, he offered me a job when I had two arms.

And when I lost the arm I was going to ring him in September 1994, and ask him for a job – and I had the job on the Tuesday morning. And I’m there now 26 years later.

William noted how his father had showed perseverance and resilience following the incident, saying: “He always saw the bottle half-full, he was never negative”.

“If I can change someone’s perception today of what not to do that I had done, it’s worth it,” he said.