How has the snow affected mart trading?

A number of marts across the country have decided to postpone today’s auctions on account of the bad weather.

Kilcullen Mart made the decision to postpone its show and sale of cattle, which was due to take place today, until next Wednesday, March 7.

Today’s beef, store and calf sale at Mountrath Mart has also been cancelled. It’s special sale of E and U-grade weanlings, which was scheduled for tomorrow (March 1), has also been called off. Instead, the mart will hold this sale next Thursday, March 8.

Despite these cancellations, a number of marts across the country are actually going ahead today. Mart managers in the west of Ireland told AgriLand that very little snow has fallen and it’s safe to continue trading. However, the sale numbers – both cattle and sheep – are expected to be back significantly across a number of venues.

Ballinasloe, Gort, Manorhamilton and Ballinrobe Marts will continue trading as usual today. In addition, Kilrush, Listowel, Roscrea, Enniscorthy and Cahir will also go ahead as planned.

Dromcolloger Mart’s weekly calf sale is also scheduled to go ahead tomorrow, as long as the weather permits.

However, Roscrea Mart’s sale, which was scheduled to take place tomorrow (March 2), has been cancelled.

Met Eireann has issued its highest level alert for the counties of Dublin, Kildare, Louth, Meath and Wicklow. The alert will remain in place until noon tomorrow (March 1).

The national forecaster has reported snow accumulations of between 5cm and 10cm in some eastern counties.

A Status Orange weather alert has been extended to the counties of Cork, Waterford and Wexford. The alert will also remain valid until noon tomorrow.

This is in addition to an earlier Status Orange warning issued for the counties of Laois and Carlow, which is valid until 11:00am this morning. Met Eireann has said further updates will be issued in due course. 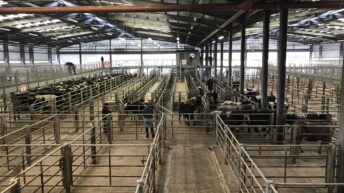