How do Irish lamb prices stack up against competitors? Find out…

Irish sheepmeat prices have received a major boost recently, with prices jumping up to 70c/kg over the last three weeks.

At the start of November this year, farmers were receiving a base quote as low as 430c/kg excluding quality assurance (QA) bonuses, for lambs weighing up to 22kg.

However, lambs that were overweight (above 22kg) were penalised which resulted in farmers receiving a price as low as 380c/kg.

Protests outside meat processing facilities, that caused a major backlog of lambs and a large number of Northern Ireland sheep being slaughtered down south, were factors believed to be the reason behind poor prices.

Currently, Kildare Chilling is offering the best price for lambs at 490c/kg excluding QA bonuses on the Irish market. The hope among sheep farmers is that the base price of lamb will reach the 500c/kg mark and not drop below this.

Data from Bord Bia shows that the average price of Irish sheepmeat this time last year was 505c/kg. Fast-forward to now and it is 477c/kg – a decrease of 28c/kg. 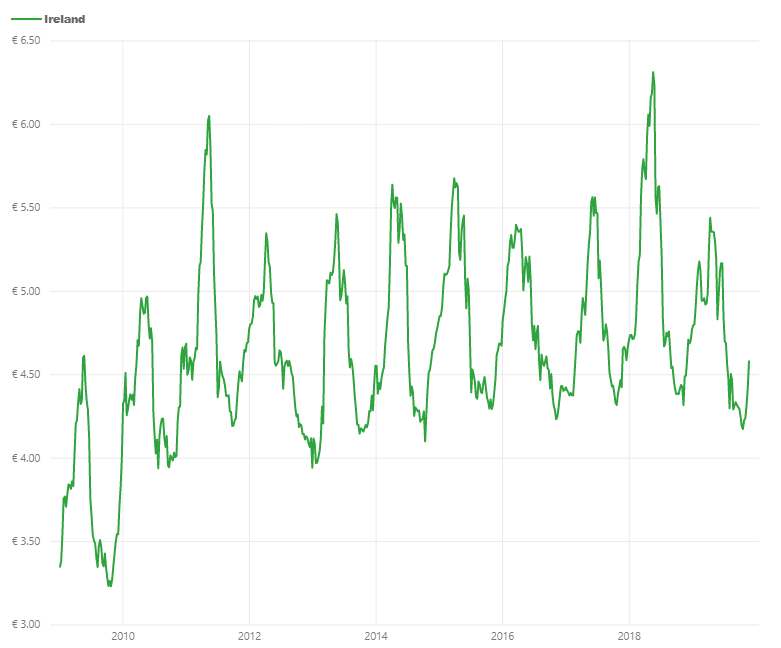 Not only this but compared to some of our competitors on the world market now, Ireland is falling behind quite drastically.

As of November 23, 2019, UK sheepmeat processing facilities were offering farmers 493c/kg for lamb. Over the past week, this has increased to just over 500c/kg, according to the most recent report from the Agriculture and Horticulture Development Board (AHDB).

Further data from Bord Bia shows that in France, sheep processing plants were offering farmers 620c/kg for lamb as of November 23, 2019 – which is over 140c/kg more than what Irish farmers were getting for the same product.

Similarly, Spain and New Zealand sheep prices are considerably higher than in Ireland. The price of lamb as of November 23, 2019, in Spain was 582c/kg and 526c/kg in New Zealand.

More worryingly for sheep farmers is that the price of Irish sheepmeat has remained quite stagnant over the past 10 years, despite the increase in input costs on farms in the same period. 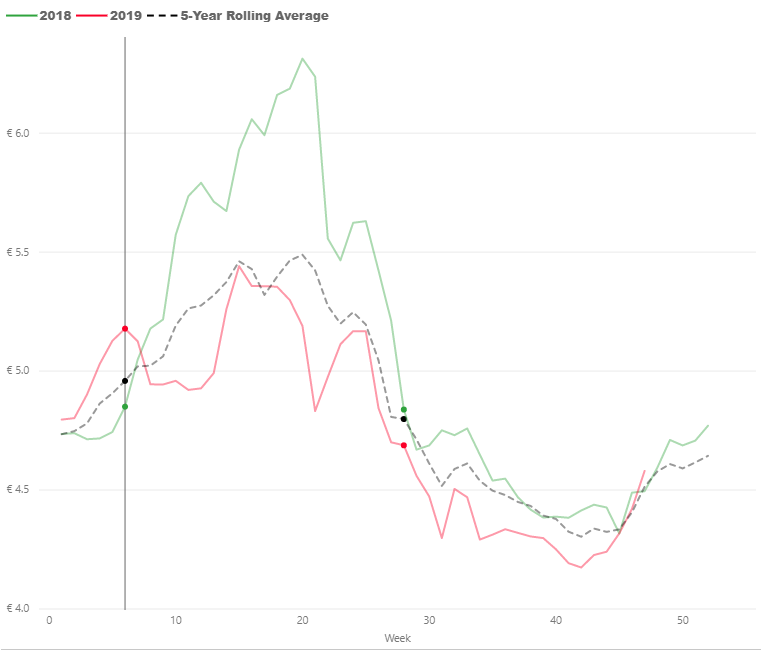 Excluding 2011 and 2018 – where Irish lamb prices saw a significant rise in springtime – prices have remained much the same or have even decreased in some cases.

However, if we delve further into the data we can see that the average price of Irish sheepmeat remains on par with the UK over the past 10 years. Furthermore, it hasn’t fluctuated as much as New Zealand or Spain.

Australia and New Zealand have seen sheepmeat prices increase by over 220c/kg and 216c/kg respectively over the last 10 years – which is over a 90% increase.

As supplies continue to tighten over the next few months, Irish farmers will be hoping prices remain the same or increase but realistically a major increase is unlikely.