We have a renewable energy product growing in Ireland without us even knowing it, according to a Kildare-based farmer and energy innovator.

Billy Costello is the director of Green Generation, an Irish company, which operates a farm-based anaerobic digestion (AD) facility.

Costello explained: “In Kuwait and Saudi Arabia, when the oil is taken out of the ground, it won’t replace itself for about one million years.

If we used grass to produce biogas, we could replace our green oil every six weeks during the growing season.

Speaking to AgriLand ahead of tonight’s episode of FarmLand, Costello explained what the process of producing biogas involves.

“The organic materials are mixed together into a soup-like material and pumped into an anaerobic digester; which is just a sealed concrete tank.

“As the material is broken down, the gas rises to the top of the tank where it is collected; it is then piped to an engine where the gas is burned to produce electricity and heat.”

The electricity produced is then sold to the national grid and the heat is used on the farm to heat the pig houses.

Billy explained another option for the renewable fuel he is creating in Co. Kildare: “Biogas contains both methane and carbon dioxide (CO2); we can filter it through a piece of equipment which takes the CO2 out and what you’re left with is exactly the same as what comes out of the Corrib gas field.

“Every other European country has a biomethane industry where they take agricultural products – like grass – and turn it into biomethane. It is then injected into the gas grid. We should be doing the same in Ireland.”

Commenting on the current energy production systems being proposed in Ireland, Costello said: “There’s no real economic sense in bringing wood chip from the US and transporting it to Lanesborough where 35% of the energy goes out as electricity and 65% of it goes out as hot water into the River Shannon. 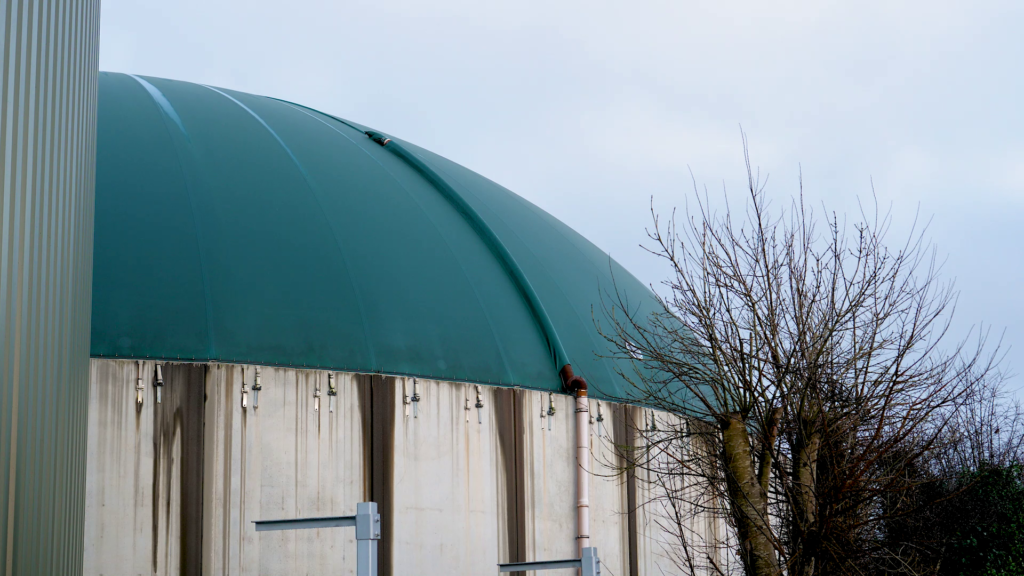 “If you had a large anaerobic digester in Lanesborough, instead of the biomass plant, you could take in thousands of tonnes of Irish silage.

The Bord na Mona workers could continue driving tractors and operating machinery as they would be cutting silage and drawing it into the biogas plant.

“We have a grid around the country which is available to take gas; it stores it – you can put biomethane into it in Co. Cavan and take it out in Co. Cork.

“The system is there; let’s use the gas grid that has already been developed.”

How will farmers benefit?

Costello explained that he believes farmers will benefit from this system because they will have another income source from growing and selling silage to a biogas plant and getting paid an agreed price.

“If a suckler farmer with 100ac put half of his land towards growing grass for a biogas plant, he will have a secure income and could spread the slurry/silage mix – used to produce the biogas – back on his land and ultimately, grow more grass.”

Costello believes Irish agriculture can solve its emissions problem by increasing output, not reducing it.

However, Billy explained that he believes the Government must introduce a Renewable Energy Feed-In Tariff (REFIT) initiative to make biogas production a more financially feasible option.

Costello outlined that Ireland currently imports approximately €7 billion worth of non-renewable carbon fuel every year. He added that if Ireland dedicated even 2-3% of its grassland to biogas, “you would solve our emissions problem in agriculture”.

Concluding, Costello highlighted: “Our gas pipeline is joined to all of Europe, so biogas that is put in to the grid in Co. Kildare today, can be taken out in Switzerland tomorrow.”

Slurry and silage in Cork could supply biogas to 56,000 homes

REAP: What will farmers have to do to get paid?

Technology ‘could be the solution to animal transport breaches’

REAP: What will farmers have to do to get paid?

Technology ‘could be the solution to animal transport breaches’