Hogan gets behind ‘digital transformation’ of EU agri-economy

Phil Hogan, EU commissioner for agriculture, has talked-up the creation of a digital single market, and the digitisation of European agriculture.

Speaking at the 2018 Agridata Summit in Cordoba, Spain, Hogan said that the European Commission has a mission to digitally transform the EU economy, including the agricultural sector.

“One of the ten priorities of this commission is to establish a digital single market,” he said, adding that the European market is more fragmented than in the US, due to cultural, economic and institutional reasons.

This, he argued, can be a challenge to many sectors.

Establishing a real single market with minimal obstacles to work across boundaries is therefore essential to unlock the substantial economies of the scale the digital sector can achieve.

Hogan continued: “Within this overarching goal, the digitisation of the rural economy, including farming and food production, is a key challenge.”

Hogan pointed out that this type of technology has already had significant influence on how people farm, particularly in the areas of food production, land management, and consumer behaviour.

He claimed that the EU’s ‘Digitising European Industries’ initiative would support the creation of digital industrial platforms which would, he said, provide digital technology ‘building blocks’ going into the future.

Hogan argued that this initiative, and others, would make data more accessible, allow for the creation of apps, and connect users and apps to developers.

The EU is also creating a network of agriculture-based ‘Digital Innovation Hubs’, which would, Hogan claimed, allow technologies to be shared across borders. 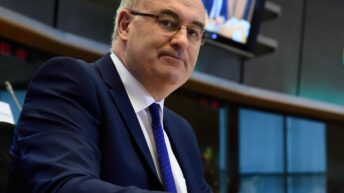