Irish dairy exports to the UK has fallen significantly over the last six months.

Dairy exports to the UK fell significantly in volume terms over the period September 2014 to February 2015 on year-earlier levels.

According to latest CSO, figures the volume of dairy products exported during the six-month period fell by over 19,000t or 8% when compared to the same period in 2014.

In that period dairy products to the value of €477m where exported to the UK.

The CSO figures show that the value of exports over the six month period fell by over €50m or 9%.

According to DairyCo Ireland is not alone in seeing exports to the UK fall in recent times. It says total UK dairy imports have fallen fairly sharply over the last six months, down 10%. 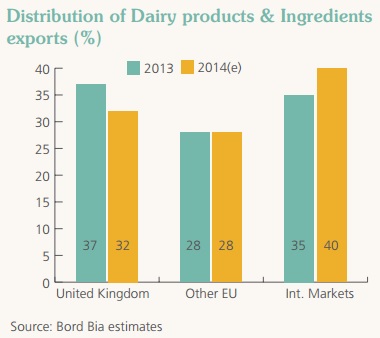 Over the same period exports have been relatively stable, despite a continuation of strong milk production, it says.

DairyCo says this pattern of trade could suggest that more UK milk is being used for displacing imports rather than driving exports.

Another factor according to DairyCo that will be influencing recent developments is the stronger Sterling, that has meant that UK products are less competitive on the continent.

In 2014 the UK remained a key market for Irish dairy exports accounting for almost one third of the total according to Bord Bia.

It says a decline of around 10% was recorded in exports during 2014 to stand at around €1 billion. It cited a decline in butter and infant formula exports more than offset a rise in cheese.

In total last year Bord Bia estimate that the value of Irish Dairy and ingredient exports for the year increased by around 3% to €3.06 billion.