Ireland has produced a lot more sheep meat this year

According to the EBLEX analysis of the latest figures this was largely the result of a carryover of lambs from 2014, following a notable uplift in the lamb crop on the back of the much better seasonal conditions than in the 2013/14 production year. 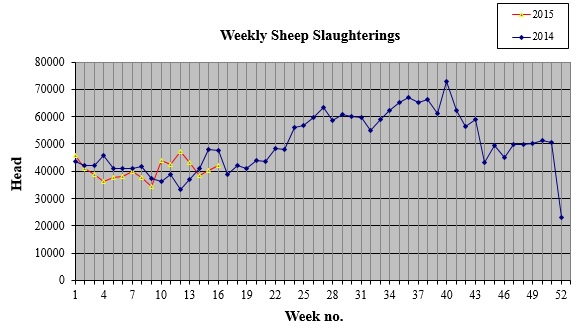 As a result these higher carcase weights have compounded the increase in lamb slaughter, it says.

Meanwhile, EBLEX also notes that following heavy culling in recent years, the number of adult sheep slaughtered in Ireland has fallen in the first three months of the year.

Sheep farmers have seen lamb prices nose dive in recent weeks with quotes falling by as much as 50c/kg last week.

According to Bord Bia, the sheep trade has slowed down recently on the back of reduced demand. It also reported the trade as relatively sluggish across our key export markets.

Prices paid for culled ewes were making around €3.00/kg.

Looking ahead, EBLEX says for the second consecutive year the Irish sheep breeding flock fell in December, despite a good year for producers, with the better lamb market and improved fodder situation.

It says breeding ewe numbers were at their lowest level since December 2010 and almost 40% below the level of December 2000.

Overall sheep numbers were unchanged in December, according to EBLEX, given the increased number of other sheep, mainly lambs, which are coming through the production cycle now.

However, it says the lower breeding flock would suggest a smaller lamb crop this year unless there is a significant improvement in the lambing rate.