Total UK beef imports in February were again above year-earlier levels. At 20,000t, volumes were up 14% on the year, according to EBLEX.

It says there was a notable increase in product from Ireland, which remained competitively priced as Sterling remained strong against the euro.

Despite the increase in volumes exported to the UK, Ireland’s share of the UK import market remain similar to year earlier levels.

According to EBLEX Senior Market Analyst, Debbie Butcher the Irish/UK trade will be up in the first quarter of the year. However, she noted that Irish production is ‘absolutely’ going to slow down as the year progresses.

“What that will that mean for the trade between the UK and Ireland remains unclear, she said. 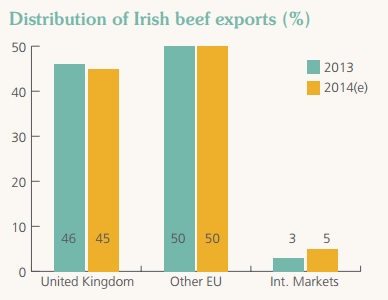 Irish production is set fall 5-7% this year, according to Butcher those current figures suggest a drop off in trade.

However, she noted given the weak euro Irish beef remains competitive on the UK market. though she also cited that political uncertainty following the UK General Election could see sterling drop a bit.

“Overall though sterling is expected to remain strong for the year.

“Beef prices in Ireland has been moving up in recent weeks and that has seen the differential narrow.

“We are not expecting beef prices here in the UK to continue on the fairly dramatic downward trend of recent weeks, she said.