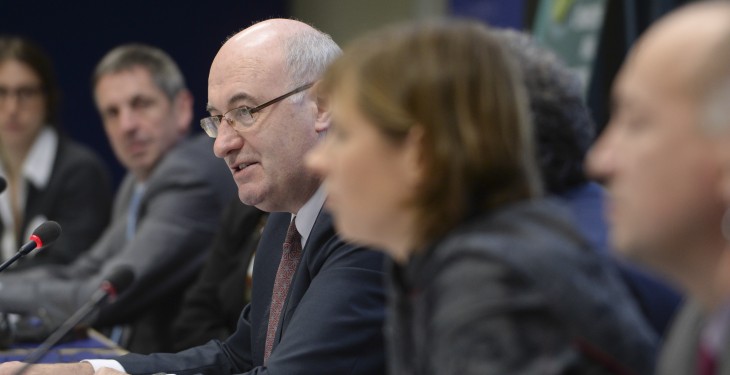 The European Commissioner for Agriculture and Rural Development Phil Hogan has been clear all the way through the current dairy market downturn that he is against raising intervention prices.

The Commission argues that the enhanced PSA system for SMP and cheese will prove a more effective and efficient instrument for reducing the current oversupply on the EU market.

According to the figures from the Milk Market Observatory (MMO) Ireland joins Belgium, Denmark, Latvia, Lituania, Finland, UK and Poland to use the measure this year with over 14,000t of SMP offered to date. It was the first time Ireland used intervention for dairy product since 2009.

Advertisement
How does public intervention function?

The Commission is against reintroducing quotas too

The end of milk quotas was first agreed in 2003 and came to an end last March.

There have been calls from some quarters for some form of supply controls to be reintroduced to deal with the dairy markets current problems.

However, according to the Commission while it is very unfortunate that this year’s end to EU milk quotas coincides with an upturn in production in other main producing countries (USA, Australia, New Zealand), a drop in demand in China after several years of constant growth, and the Russian import ban.

The Commission remains convinced that the medium to long-term prospects for the dairy sector are very positive.

Any return to quotas or production controls will hinder these mid-term prospects for the EU sector, it says.