Irish live cattle exports down 25% so far this year

According to the latest Department of Agriculture’s figures, exports to mainland Europe have been hardest hit which has had a major impact on both weaning and store cattle exports.

However, despite this fall, exports to Northern Ireland have increased by 16.6% or 5,124 head with many industry sources highlighting the strong Sterling as the main reason for this increased live exports. 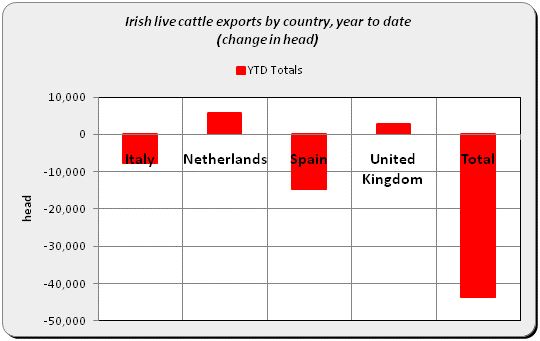 Exports to non-European countries have fallen by a staggering 77% which equates to a drop of almost 12,000 head of cattle.

The cessation of Irish exports to Libya as a result of political turmoil is for the most part to blame for this fall in exports.

Exports to the Lebanon have fallen by 68 head, while exports to Tunisia have increased by almost 700 to reach 2,789 head.

Calf exports have also dropped by approximately 16,000 head, this appears to be as a result of reduced exports to Belgium and Spain.

Finished cattle exports from Ireland have also fallen by approximately 4,700 head or 12.3%, the Department of Agriculture’s figures show. 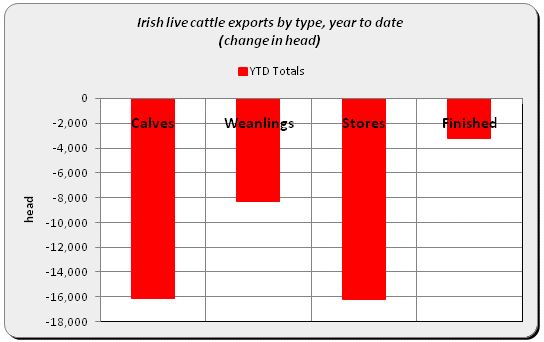 In the first half of the year, EU beef and veal imports were up 3% on the same period last year at 101,000t, AHDB the organisation for the English beef and sheep industry has said.

It attributes this growth to increased volumes of chilled products, accounting for almost two-thirds of trade and consisting almost entirely of premium cuts.

The import price was up by as much as 16% it said, contributing to the only small volume increase, given the firm global market for beef and the weakness of the euro.

In US Dollar terms, the import price was actually down 6% year-on-year, it said, while Brazil remained the largest supplier by some margin, accounting for a third of all imports – shipments were up 2%.