It’s over 12 months on since the beginning of last year’s beef ‘crisis’ and beef prices are back down around the €4/kg mark.

Yet, the meat processors have said that this price puts Irish beef prices at 110% of the EU average and that these prices are not sustainable.

At the same time, the number of dairy-type calves coming into the beef system is increasing, as the dairy herd jumped by 45,000 since 2013.

Agriland reported recently that new beef markets have yet to take significant quantities – with the US only accounting for 31t of Irish beef this year.

Meat Industry Ireland has warned that the number of current markets available to Ireland need to be expanded.

At the same time, this increase in dairy cow numbers lead to a corresponding fall in beef cow numbers, with a drop of 4% or 43,900 head over the same period.

On the back of increased cow numbers, calf registrations for the first five months of 2015 were up 6.6%, according to Bord Bia. An additional 110,000 calves were born during this period.

The largest increase occurred in the dairy sector with an additional 94,000 dairy-type calves on the ground, while suckler births up by 16,000, it says. 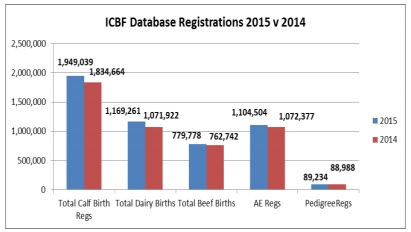 The 2015 increase in calf births is the second consecutive increase following a 4.4% slump in 2013.

Figures from the Central Statistics Office (CSO) indicate that calf births made a slight recovery by 2% in 2014, with the vast majority of these births having happened in the dairy sector, with births to dairy dams rising by 3.7%.

The remaining 41% is distributed through the retail sector, in the form of minced and diced products (60%) and steak and prime products (40%).

A further 238,000t is exported to the EU market, Department of Agriculture figures show.

Meanwhile, live exports have fallen by approximately 48,000 head this year. Live exports are critical for the Irish beef industry, says Bord Bia, as it presents an alternative price avenue. 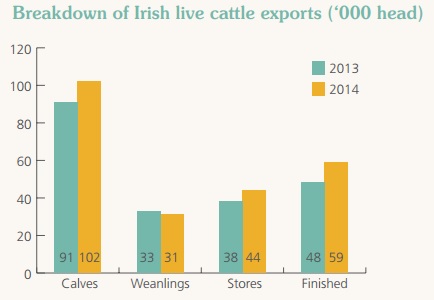 This fall in live exports along with increased calf births could potentially result in 150,000 additional cattle coming to slaughter in Ireland in the near future.

Irish finished cattle prices are presently at 110% of the EU average price, as continental markets for Irish beef remaining weak.

MII has also said that it is concerned about the weakening demand for beef products, especially across continental Europe, in part fuelled by the backlash from French importers.

French retailers and operators are now sourcing domestic product to appease the recent producer protests, this is forcing Irish exports to search for alternative market outlets.

Furthermore, as other commentators have noted, store cattle prices in Ireland are particularly unreflective of the current beef market trends, which have been cited for the reduced weaning and store exports.