There is ample anecdotal evidence to show that no business is served by one style of leadership behaviour, and the Irish agri-food industry is no different.

Diversity is not just about introducing more women; it is about a broad range of thinking at senior level.

This all leads to a virtuous cycle of increasing returns.

In a global analysis of 2,400 companies conducted by Credit Suisse, organisations with at least one female board member yielded higher return on equity and higher net income growth, than those that did not have any women on the board.

Many agri businesses do not have any women on their boards and our industry is poorer for it by failing to recognise the value of that perspective.

The statistics also show that many women who enter management do not remain there.

To challenge thinking, individuals need to become aware of their beliefs and biases.

Conversations need to happen around how we support women, and young men, in different roles and in different ways to promote diversity in thinking, decision making and representation in farm and food organisations.

What gets in the way is what is known as “unconscious bias”.

This unconscious bias comes from our life experiences and the way we have been brought up. It is hardwired into us.

We bring these unconscious biases into the workplace and they influence how we make decisions.

When it comes to women in decision-making positions in the agri sector, what are the assumptions that men and women make that might stop them recognising and utilising talent and potential?

What are the assumptions or limiting beliefs that women themselves are making that might be stopping them putting themselves forward? Do our ways of working send out silent signals that ‘no women need apply’?

If we’re going to tackle a skills shortage, and build a sustainable, successful agriculture industry for the future, we need cultural change that draws on the learnings that only diversity in gender, age, and background can provide.

Tackling only one of these at a time is a wasted opportunity.

The future success of the agri-food industry depends on attracting diverse talent and diverse thinking. If we can agree on this, it will make it easier to identify and talk about the barriers that are preventing it happening and we can put supports and processes in place to make it happen.

Ceres is hosting a breakfast event on Tuesday, May 29, to discuss ‘The Challenges of Embracing Diversity and Effecting Change in Agri-Food Businesses’.

Speakers will include: Ciara Jackson, food, agribusiness and drink practice leader at Aon; Brendan Gleeson, head of policy and strategy at the Department of Agriculture, Food and the Marine; Brid Horan, non-executive director and former deputy CEO of ESB and founder of 30% Club Ireland; and Sean Farrell, head of agriculture at Bank of Ireland.

Tickets, which cost €15 per person, include a continental breakfast and can be booked via www.eventbrite.ie.

Karen Brosnan is a management consultant and chair of Ceres – the women in agri-food leadership network. She is also a director of Nuffield Ireland and received the Nuffield Scholarship in 2013. 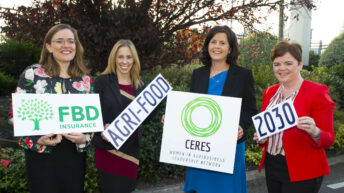