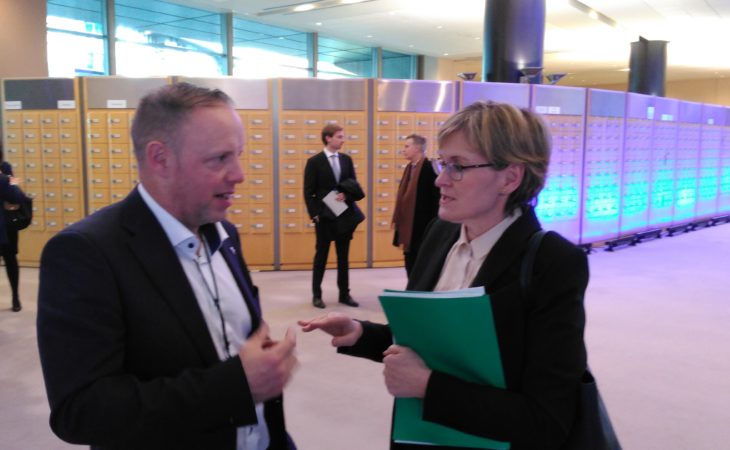 The Greening top-up under the Basic Payment Scheme (BPS) is likely to be abolished under reform of the Common Agricultural Policy (CAP) post-2020, it has been claimed.

Following meetings with European farming think tanks and MEPs in Brussels, Eddie Punch, general secretary of the Irish Cattle and Sheep Farmers’ Association (ICSA), anticipates that the Greening payment – which accounts for around 30% of the direct payments budget – is in the “firing line”.

Punch, along with a number of his colleagues, attended the European Parliament this week as part of an ICSA delegation aimed at highlighting the impact of Brexit, potential CAP cuts, the pending EU/Mercosur trade deal and other issues on Irish farmers.

There is a sense that Greening hasn’t been a success and that it could be abolished under CAP reform post-2020.

“It’s seen as highly bureaucratic, unpractical and cumbersome to implement; the Greening top-up as we know it might be on its last legs,” he said.

The payment for a compulsory set of ‘greening measures’ was first implemented in 2013 to enable the CAP to be more effective in delivering its environmental and climate objectives; plus, to ensure the long-term sustainability of EU agriculture.

The measures include: crop diversification; maintenance of permanent grassland; and Ecological Focus Areas (EFA). The measures comprise of a combination of management practices or landscape features as set out in regulation and applied by member states.

Speaking to AgriLand after attending the European Parliament’s Committee on Agriculture and Rural Development today, Punch said member states are coming under increased pressure to boost contributions to the EU budget to mitigate for Brexit.

“Gunther Oettinger, the EU Budget Commissioner, was at pains to point out that a 30% or 15% cut to the CAP budget is not something he is proposing.

“These are scenarios he has proposed to illustrate to member states the significance of the gap that will need to be filled because of Brexit. EU states will have to cough up more.

“He is proposing a 50/50 split in savings and new money that will be needed to fund the CAP budget,” he said.

However, Punch added that Fine Gael MEP and first vice-president of the European Parliament Mairead McGuinness and Sinn Fein MEP, Matt Carthy, both spoke out against cuts to CAP.

As for the ICSA position on any potential cuts to the CAP budget – big or small – he said the organisation is “totally opposed”.

“It’s not our fault; we didn’t cause Brexit. Farmers can’t be expected to do more on climate change, air quality and water quality and be faced with cuts,” he said.

Punch also got a sense that there is more impetus towards substantially reducing the ceiling on CAP payments from its current level of €150,000.

There are stronger calls to significantly trim the €150,000 BPS payment ceiling. My feeling is that it could be capped at €100,000 or perhaps even lower.

“The ICSA is opposed to the fact that controlled feedlots are getting 80% of the current CAP budget.

“Reducing the ceiling could act as a saving shield to small farmers; but, at the same time, you can’t cut by that much without damaging the small farm too,” he concluded.