Conditions for tillage farmers are extremely difficult here in Ireland at present as wet weather has impacted on winter planting.

While farmers have been plugging away in October, there may still be opportunities to plant crops into November if drier conditions present themselves, but there is no doubt that the winter cereal area will be down. Winter crops provide higher yields than spring and have also shown to return higher profits.

With this in mind, it is important to keep an eye on grain markets and to considering forward selling. It is also important to keep in mind that production will most likely be down on farms, so farmers should revise their calculations so they do not forward sell grain that they cannot supply.

However, things aren’t rosy in other countries either. After extremely wet conditions hampered corn and soybean planting in the US in the spring, some states are now faced with digging potatoes and harvesting corn with snow in the forecast.

Last week, very little corn had been harvested and crops in certain areas were ripe. However, a blizzard hit North Dakota and left 4ft snow drifts in places.

The US Department of Agriculture’s (USDA’s) crop progress report showed that as of October 13, 22% of the corn in the 18 main producing states had been harvested. Just 1% of this corn was in North Dakota where the snow hit.

Hard frost also hit in Idaho where farmers were trying to dig the last of their potato crops. Idaho produces approximately 32% of US potatoes and when frost hit, CNN US reported that 15-20% of the crop was estimated to be still in the ground.

The harvest is underway in Australia. A lack of rain in September in some areas has led to a decrease in production. However, rain is forecast for the three big grain producing regions of Victoria, South Australia and Western Australia in the coming month and this may help to improve yields.

Australian wheat production is forecast to be down by 1 million tonnes this season.

MATIF wheat climbed all week as wheat supplies look to be tightening somewhat in some of the main producing regions like the US and Australia.

Chicago Board of Trade (CBOT) wheat also increased considerably on Thursday from 513.25c/bu to 525.50c/bu. 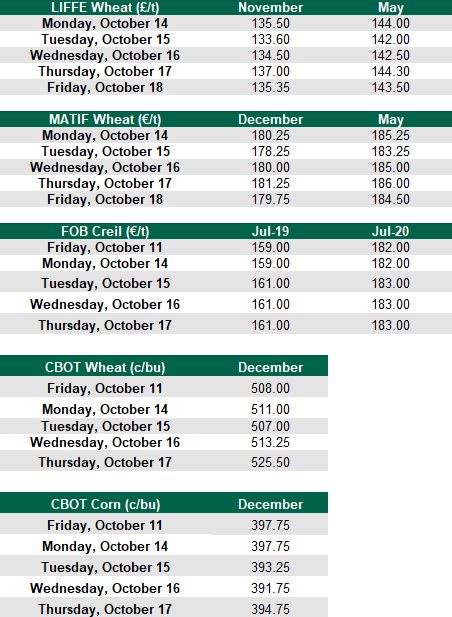