The past week has been an interesting one for many grain farmers. Protests outside Glanbia’s plants in Portlaoise and Clonroche came to an end yesterday when Glanbia Ireland and the Irish Farmers’ Association’s (IFA’s) dicussions came to an end.

As farmers receive their grain cheques across the country they must not move their interest away from the markets until the same time next year. Selling forward and watching market trends and prices throughout the season can result in more profit on your farm. Keeping up to date is essential.

The United States Department of Agriculture (USDA) released its WASDE report yesterday, October 10. A better picture of the US corn crop began to show in the report. The US corn crop was forecast at 13.779 billion bushels, down 20 million bushels from the September report.

Advertisement
While yield was forecast up, the decline in harvested area has resulted in a reduced harvest forecast. Corn production globally is expected to be lowered slightly.

While world wheat production is lowered by 0.3 million tonnes, global supply is up fractionally due to higher beginning stocks according to the report.

Wheat production in Australia has been forecast down by 1 million tonnes due to drought, while production is also expected to be lowered in the US, Canada and Serbia.

The day after the report was released, MATIF wheat and FOB Creil finished in the green, while US wheat and corn both dropped on Thursday, October 10 and recovered slightly the following morning. 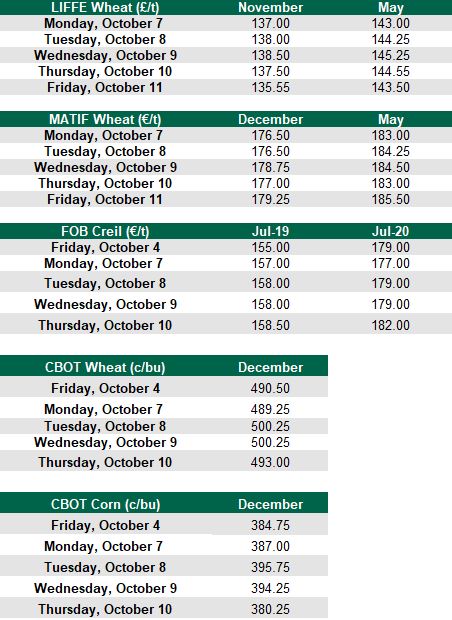 Drought resistant corn could mean an increase in supply