Global milk production is beginning to stabilise, with the combined milk production of the five key exporting regions, the EU, US, New Zealand, Australia and Argentina, reducing in May, according to AHDB Dairy.

It attributes this as a result of a slowdown in the average daily production in the EU, which saw a drop in production of 4m litres per day in milk equivalent.

In May, the daily milk production equivalent* for the five regions was down 0.7% versus April, AHDB found.

Since April 2016, the year-on-year rise in milk production has averaged 0.2%, however up until March 2016, the key five regions were running around 2.5% up year-on-year, which AHDB said was predominantly driven by the EU’s step up in milk volumes post quota.

The latest milk production figures for the US show that June milk production in the 23 major states of the US was up 1.6% on June 2015 levels with 16.7 billion pounds of milk being produced.

While the US continues to increase production, globally this increase is offset by decreases in Australian and New Zealand production.

Meanwhile, in New Zealand Fonterra’s milk collections for June were down 1.4% on the corresponding month last year.

June milk production figures for the EU and Argentina are not yet available, however, AHDB has said that further declines would be expected in the EU resulting from the impacts of low farmgate prices.

Also, the recently announced EU aid package could see farmers get paid to reduce their output. In Argentina AHDB has said that the country continues to struggle with eroding margins and flooding in the main dairying regions. 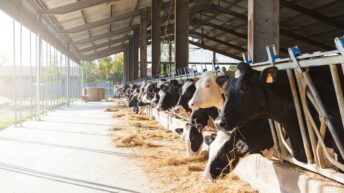