Global Dairy Trade set for another bounce this week

According to latest futures market trading, prices at the auction could rise by as much as 10% with whole milk powder prices set for a 15% increase, according to one analysis.

One factor that may be impacting positively on the dairy sector is Fonterra’s signal last week that milk production in New Zealand might be lower than expected for the coming season.

Looks like 3 in a row for this wk’s dairy auction. Ftrs point to WMP up 15% & >10% overall #dairyturningcorner ^NP pic.twitter.com/KGwbBG7gZ2 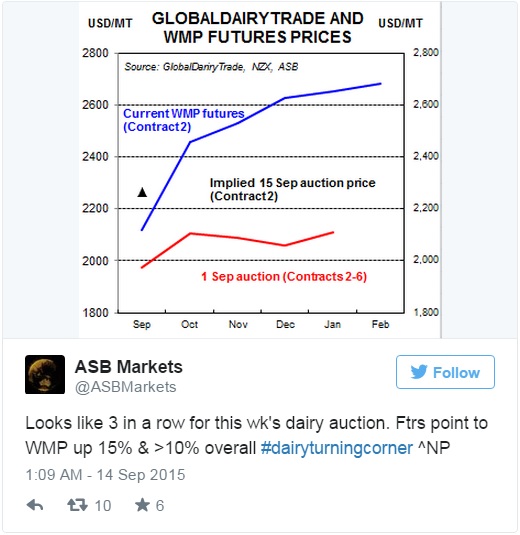 Last week, Fonterra maintained its milk volume forecast for the 2015-16 season in the range of 2-3% lower than the amount collected last season but hinted that it could fall further.

The event represented the second positive auction for prices in a row after prices rose last month for the first time since March 2015 after 10 negative auctions.

Average prices paid at the latest Global Dairy Trade auction rose 10.9% on the last event held two weeks previously which itself was up 14.3%.

Lakeland Dairies has cut its August milk price by 0.75c/L to 26.25c/L after the co-ops board met last week.