The organisation estimates the total amount of winter wheat produced to be at 18.6 million tonnes. This is 23% less than 2017.

The DBV estimates Germany’s total grain production for 2018 at 35.6 million tonnes. This is down 400,000t from the group’s estimate at the beginning of August.

Winter barley production decreased by 18% from 2017, while winter oilseed rape production is estimated to be 36% below the five-year average. The low yields are as a result of the recent drought and heatwave of the summer just gone.

Advertisement
The drought in Germany has a major impact on grain exports and availability, as Germany is the second biggest grain producer in the EU after France.

It accounts for a large amount of exports in the EU and, according to the Agriculture and Horticulture Development Board (AHDB), Germany accounted for 26% of the UK’s wheat imports from 2012/2013 to 2016/2017.

The German government has dedicated €340 million to farmers who lost 30% or more of their crops this harvest in the extreme weather.

However, the DBV has reportedly said that €1 billion is needed to compensate affected farmers for crop losses that occurred alongside the country’s highest summer temperatures since 1881. 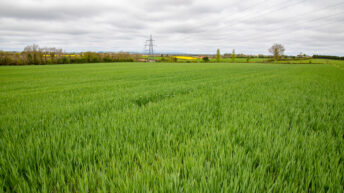