Latest production forecasts from New Zealand dairy giant Fonterra suggests that milk production could decline sharply towards the end of the season, according to DairyCo.

Fonterra has forecast its 2014/15 milk production will finish 2.1% below last year.

According to DairyCo this suggests supply during April and May will drop 29% year-on-year.

It says this is a higher annual production figure than previously forecast but still appears a fairly sharp decline towards the end of the season, given that rain has improved dry pasture conditions.

Advertisement
However, DairyCo also says that recent better pasture growth may be too late to support milk production this close to the end of the season, with many farms said to be already drying cows off or milking less often.

It says farmers are also reported to be keeping pasture usage tight now so they can grow more for next season when milk prices are expected to be higher. 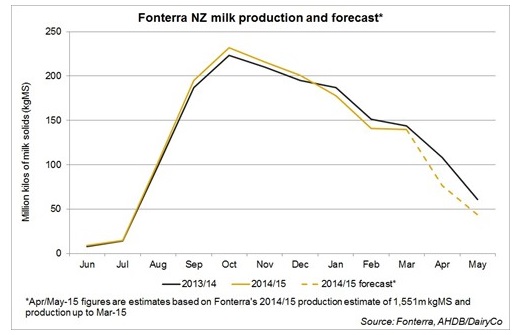 However, it says dry conditions remain across most dairying regions and follow-up rain is needed to hold milk production in line with last season over the coming months.