The Donegal TD outlined that he has been working with MEP Luke ‘Ming’ Flanagan on this issue.

This, they claim, along with increased payments under agri environment schemes will support 7,000 smaller farmers in Donegal by bringing an additional €17 million annually in extra payments to the county.

Commenting, Pringle said: “The vast majority of farmers in Donegal are small farmers, mostly on marginal land and hill farms.

“They are farming in a more natural and environmentally friendly way than the big farmers who have been benefiting most from CAP payments.”

Continuing, the TD said that, under the BPS, the Irish Government has to date “been awarding payments to the benefit of larger farmers down the country, with some getting up to €450/ha while some smaller farmers in Donegal have been getting less than €150/ha in many cases”. This, he added, is unacceptable.

“In December my colleague, Luke ‘Ming’ Flanagan MEP, secured an amendment in the European Parliament which means that the Irish Government will now have to flatten BPS payments to around €260/ha for all farmers.

“My role in the Dáil will be to ensure that the government complies with this,” Pringle said.

The TD claimed that previous governments have been “dividing farm payments in a way that benefits larger farmers rather than all farmers”.

“This has to stop as smaller farmers are managing the land in a far more sustainable way that supports biodiversity and lower carbon emissions.

“I have been supporting the Irish Natura and Hill Farmers Association (INHFA) which has been campaigning for this reform.

I also support its call to have restrictions on the Green, Low-Carbon, Agri-Environment Scheme (GLAS) lifted to increase participation to the environmentally friendly scheme.

He continued, adding: “Small farmers on marginal land have a vital role to play in capturing carbon emissions and decreasing biodiversity loss.

“This can be done by supporting them to maintain bog land, planting native species of hardwood trees rather than massive Sitka spruce plantations, and by maintaining habitats that support a wide range of biodiversity,” concluded Pringle. 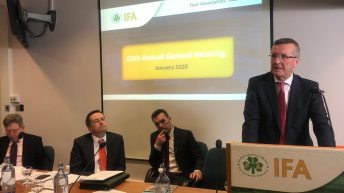