Farmer shoots 15ft alligator which he claims ate his cattle 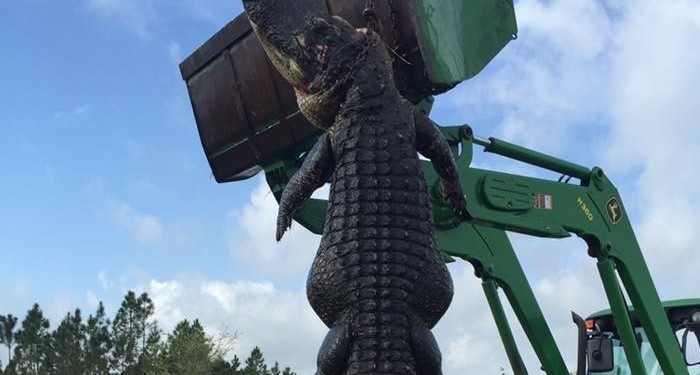 A farmer in the US has shot dead what is claimed to be a 15ft long alligator after he believed it was killing his cattle.

Blake Godwin, a Florida hunter and farmer, found the alligator in a cattle drinking pond while out hunting recently.

Speaking to Fox 13 news, Godwin said that they also discovered the remains what they determined to be cattle in the water.

“We determined that he was in fact attacking our livestock as they came to drink.”

Godwin said that the 15ft alligator was 800lb and it was so big that they had to pull it from the pond using a tractor.

The photos show the size of the creature, hanging off the bucket of the John Deere 7230, which Godwin said were not photo-shopped. The photos were taken on their phones and uploaded onto social media.

“It is hard to believe that something this big exists in the wild. Hunting is a way of life for us and we are very proud of it.”

Fox 13 news has reported that Godwin plans to donate the alligator meat to charity and then have the animal taxidermied to display it at hunting events.