This week, over 120 lambs will be born on the farm of John Fagan, who farms cattle and sheep in Westmeath.

The singer said that he’d never been involved in lambing before but Carter became a midwife on last night’s show as the video below shows.

There was a good reaction to the show on Twitter last night, with plenty of people tweeting their support for the show.

#OnTheFarm is the #TopGear of the farming world.

On Dublin resident was ‘freaked out’ but the happenings on the farm. Mind=blown.

Tonight is the third episode of the show and viewers will see former Cork camogie player Anna Geary join presenters Aine Lawlor and Ella McSweeney on the show.

Geary has tweeted that the pressure is now on her for the milk challenge on the farm. Nathan Carter and presenter Mairead Ronan have both already taken the challenge.

Pressure is on now! Looking forward to the milking challenge tomorrow on RTE's #onthefarm @iamNATHANCARTER & @cocomairead set the standard 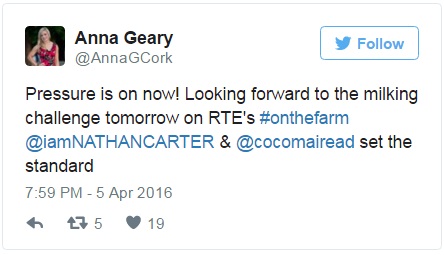 The secret life of the pig features on the show this evening and two of the guests will also go head-to-head in a chicken plucking challenge.

John Fagan tweeted this great shot of his farm earlier today ahead of tonight’s show. 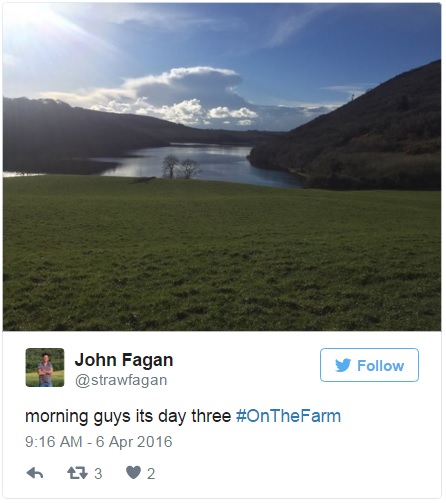 Big Week on the Farm will also have live link-ups with a beef farm in Galway and some busy bees on a tillage farm in Meath.

With plenty of ewes yet to lamb, will any of them give birth tonight while the show is on air? Tune in at 7pm on RTE One to find out!

BIG WEEK ON THE FARM LAMBING RTE
LOADING NEXT STORY