Farmer accused of starving sheep after discovery of 35 deaths

A Mayo sheep farmer has been charged with cruelty to his flock after it is alleged that 35 sheep, which were found dead on land he was renting, starved to death.

Martin Walsh (44) of Ballintleva, Clogher, Westport, was charged with a total of 35 counts of being in breach of the Animal Health and Welfare Act following the discovery of the dead sheep on land in Co. Mayo in March 2018.

The sheep were located on land rented by Walsh at Shammerbaun, Kilkelly, Co. Mayo, and on March 16, 2018, Gardaí received a report of animals being neglected on the land.

Patrick Reynolds, counsel for the Director of Public Prosecutions, told a sitting of Castlebar District Court on Tuesday that when Garda Ferghal O’Caheny visited the land he noted a number of dead sheep.

The Department of Agriculture was contacted and the following day, Garda O’Caheny and a department official revisited the land and found 35 dead sheep.

Reynolds said they noted that the land was of poor quality and there was no feed for the sheep. Reynolds added it is alleged that the sheep starved to death.

Judge Fiona Lydon accepted jurisdiction in the case and Myles Gilvarry, solicitor for Walsh, said his client was pleading not guilty to the offences and would be seeking a hearing date.

When asked how long the case would take, Judge Lydon was told it would take most of the day. She adjourned the case until Tuesday, May 7, for mention to fix a date for hearing.

An application for legal aid on behalf of the farmer was deferred to a later date. 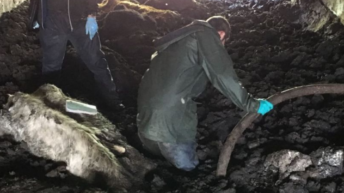