Expanding with crossbreds: ‘Too many people regret the opportunities they didn’t take’

Faced with the opportunity of expanding their dairy business, Joe and Kathleen Kirwan jumped at the prospect of milking more cows.

But when a 104ac farm became available to rent, just across the road, the couple had to “take a deep breath” and analyse the viability of expansion.

After drawing up a robust plan, the Kirwans discovered that the venture was viable and put the wheels of expansion in motion.

We soon realised that the only way to make money was by milking crossbred cows and nothing else.

“We are milking 200 cows this year and it’s a totally different scenario to where we were two years ago,” Joe added. 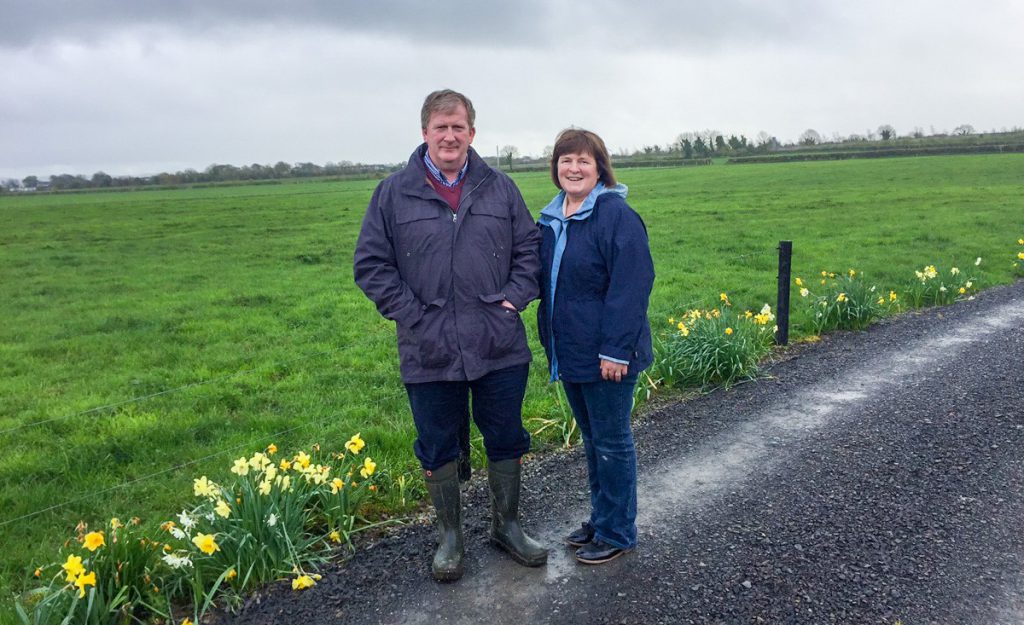 Prior to expansion, the Kirwan’s herd consisted of high-yielding Holstein Friesian cows which produced 10,000L/cow on average.

“When all the analysis was carried out, they weren’t leaving enough to justify keeping them and they were high-workload cows – it took a lot of labour to look after them,” Joe said.

“From the outside looking in they looked quite impressive, but when all the costs were considered they weren’t nearly as profitable as crossbred cows.”

Joe, a well-known figure among farmers through his work with Eurogene AI Services, has seen the benefits of crossbreeding first-hand.

Joe has since stepped away from his position with Eurogene to focus on running the 200-cow dairy enterprise, alongside his wife Kathleen.

“I started a job with Eurogene AI Services and, within a year, I was made Commercial Manager of the company. I worked there for 11 years and during that time we kept milking 70 cows. I milked in the morning and Kathleen milked in the evening.

“I believed in the product. I had seen what it could achieve at farm level, so we decided to go crossbreeding ourselves,” he added.

Some of the first crossbred cows in the herd are now in their forth and fifth lactations and Joe has been more than happy with their performance.

The first crossbred cows preformed really well and our milk solids in the creamery went up, but more importantly they were going in-calf.

“After seeing that we decided to move towards a 100% crossbred herd,” he said.

Joe said that he left purchasing too late in 2015 and was unable to source the exact animals he wanted, as the best heifers were already spoken for.

But, he was more than pleased with the heifers purchased in September and October of 2016.

Kiwi-cross bulls from LIC were also used on Holstein Friesian cows to produce heifer calves, but looking back Joe admits that pure Jersey genetics may have been the better option.

“We were inclined to use Kiwi-cross genetics on the Holstein Friesian cows, which gave us a 25% Jersey and 75% Holstein heifer. 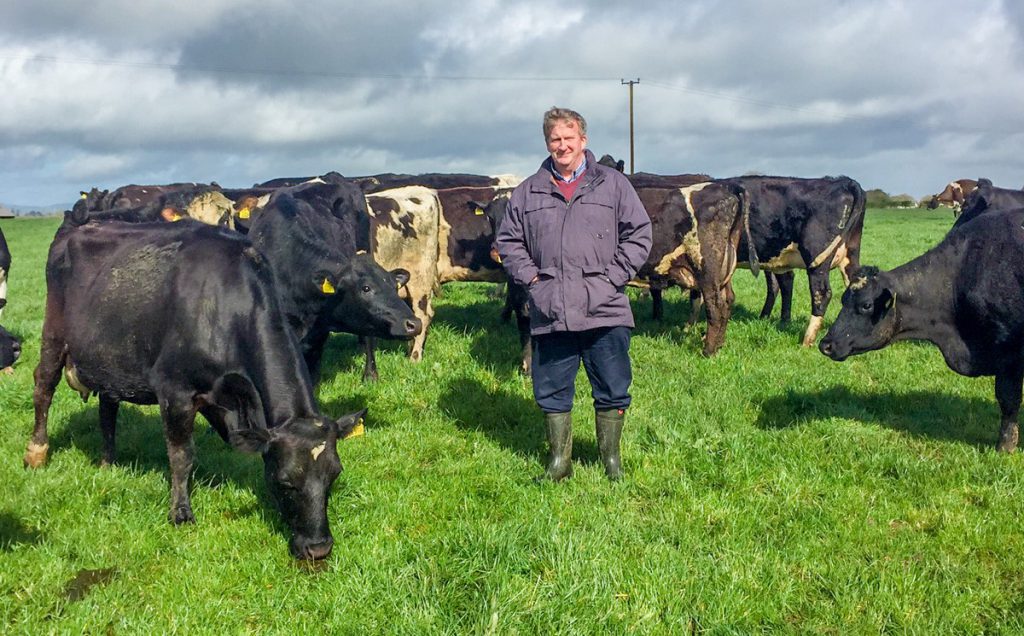 “If I was to start again I would definitely use Jersey genetics on the Holstein cows to produce a 50% Jersey – 50% Holstein animal.

“Coming from the right type of Holstein cow, the cross will produce the right-sized cow, but, you must have Holsteins for Jerseys. If you have Holsteins, there is only one cross and that’s Jersey.

That cross will produce a super cow. She’s the right size, produces the right volume of milk and is even the right colour.

“She will be a black, high-producing cow with good fertility,” Joe said. 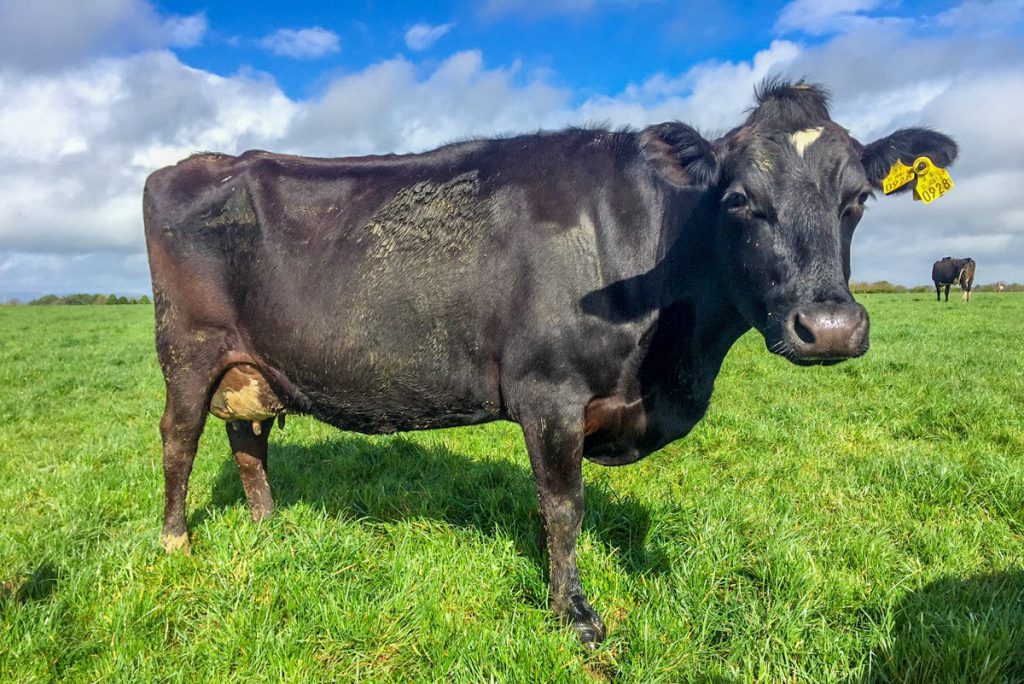 Labour played a key role in the husband-and-wife team’s decision to transition to a crossbred herd.

So far, Joe said, approximately 170 of the cows have calved with zero veterinary assistance and minimal intervention from either himself of Kathleen.

“Our challenge is to see can we manage 200 cows without labour. We have had a very busy February and, without crossbred cows, we wouldn’t have managed.

“If you had to really focus on the cow and calf, like we were doing with the Holsteins, we wouldn’t have managed and it wouldn’t have been physically possible to do so without bringing in labour,” he added.

The Tipperary-based farmer was also pleased with the calving performance of the herd this spring.

The crossbred cows perform exceptionally well. We started calving on the first of February and we have less than 30 left to calve.

“We didn’t stay up many nights, we let the cows calve themselves and, against all Teagasc recommendations, we feed colostrum to almost no calves.

“The calves are robust, healthy, get up and suck and we hardly get a chance to give them colostrum. For us to manage the numbers we have, robust cows and calves are a must,” he said.

“To look after 200 cows without outside help requires an ‘easy-care’ cow, but we have also invested in practical facilities. 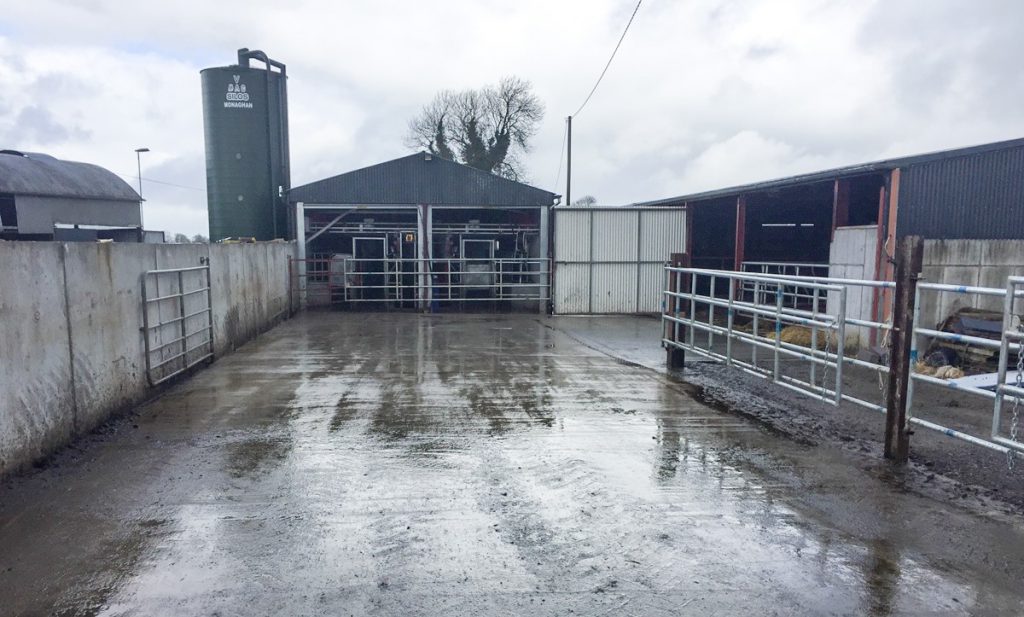 “We were either going to invest in labour or facilities and we decided that facilities was where would go because we were happy doing the work ourselves,” he said.

The Tipperary-based dairy farmers also use the services of a contract rearer. All of the heifer calves are moved off the farm at approximately 14 days of age.

These heifers return to the farm three months before calving.

Approximately 170 of the cows in the herd are now sired by Jersey or Kiwi-cross bulls and the last remaining Holstein Friesian cows will be held for another one or two lactations.

Joe explained that he is delighted with the performance of the crossbred cows in the herd so far.

“Our solids are as good or even better than some of the best farmers, so we feel we have made huge strides in that short space of time. Our first milk cheque from the new herd arrived last month. Our milk price was 9c/L over the base price and was just short of being 6c/L over the average supplier price in Centenary.

This has convinced me that we have gone down the right route. We have had a very easy calving season and now we are getting an exceptional milk price.

“At the moment, the herd is averaging 26L/cow/day. But it is a young herd with 70+ first-lactation cows and more than 70 second-calvers.

“So, out of the 170 cows that are milking, there are 140 first or second calvers so we consider the performance to be very good,” Joe said.

Breeding season kicks into gear in May

The breeding season on the Kirwans’ farm will kick into gear on May 1 and Joe has identified the sires he will use – all of which will be sourced from LIC.

“We will be using a lot of Priests Solaris (PSQ). We have PSQ daughters on the ground and they are milking exceptionally well. They have everything going for them.”

Given the high demands at calving time, Joe added that all of the heifers in the herd will be mated to Purebred Jersey sires. 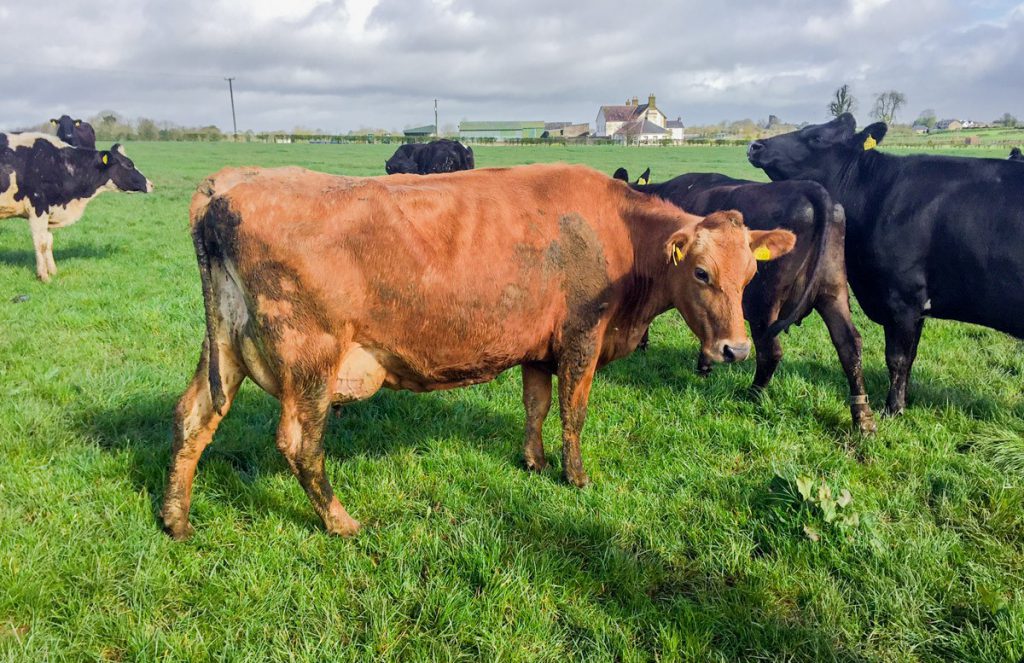 “When you are dealing with numbers, you have to be able to calve them,” he added.

An area that the husband-and-wife team will be focusing on in the coming years is fertility.

And, although the three-week heifer submission rate over the last number of years has been 100%, there is room to improve the fertility performance of the cows.

“We would usually get an 80% submission rate on the cows in the first three weeks. The problem with the cows is that it is like two herds – a crossbred herd and a Holstein Friesian herd.

The crossbred and New Zealand-bred cows are doing everything I could ask, but the others aren’t. I would like to think that we would get a much better fertility performance over the next three years.

“Our target is to have to an empty rate of 5-7% in 12 weeks of breeding. We have a good bit to do to fix that, because late calvers this year haven’t a hope,” he said.

To improve the fertility performance of their herd, the Kirwans will voluntarily cull any cows that fail to meet this target. Keeping 70 heifer calves each year will allow them to do so from within. The first of these heifers are expected to come into the parlour during 2019.

On the back of purchasing stock and to protect the performance of their herd, the Kirwans also put in place a robust vaccination programme. This eliminated part of the risk of bringing in disease, which could reek havoc in the existing herd, with purchased stock.

Why did the Kirwans decide to expand?

Up to last year, Joe said, the farm wasn’t big enough for any of their eight children to come home and farm full-time.

“It wasn’t big enough for anyone to come back to and I wouldn’t expect them to come home to farm. Our children were never asked to stay at home or wouldn’t be.

“We are trying to build the unit large enough so that the opportunity would be there for one of them to come home, if they wanted to, or put a farm manager in place when our time at farming is over.

“The problem with most farms that go from 70 to 100 cows is that 100 cows won’t sustain a labour unit and you are caught between a rock and a hard place. You have made yourself busy, but you haven’t made yourself profitable enough to justify labour. We are trying to build a unit that is large enough that it can be run without our input.

“That’s not our plan in the immediate future, but it is our long-term goal,” he said.

Joe also credits Linda O’Neill, LIC Sales Manager, for giving him the push needed to make the conversion from a herd of black and white to crossbred cows. 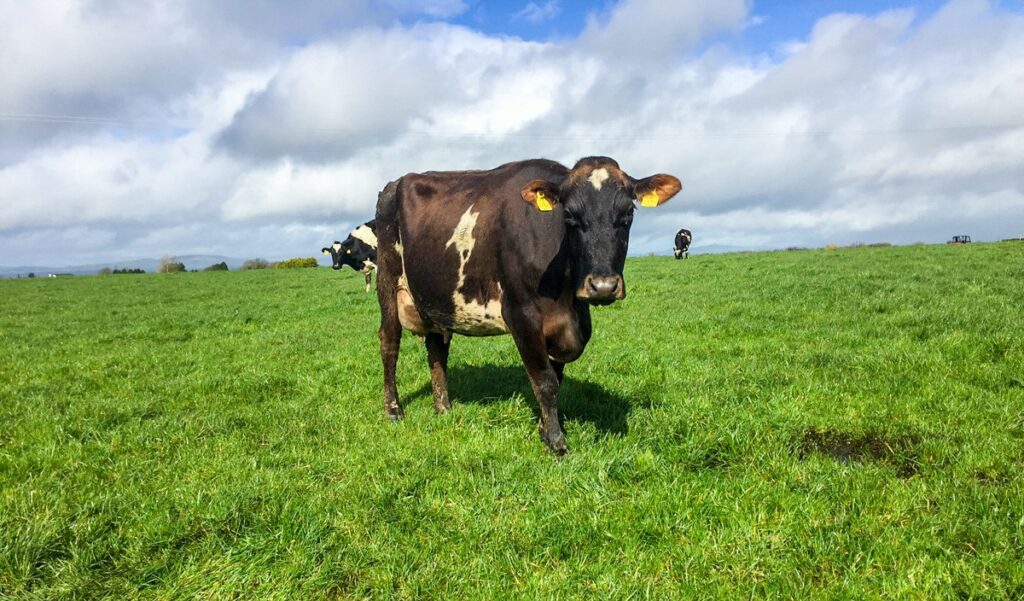 In the coming year, Joe and Kathleen will be working closely with LIC as one of the company’s monitor farms.

As part of the programme, the Tipperary-based dairy farmers will host an open day later this summer to discuss their route to expansion. A consultant will also visit the farm every month to offer regular advice on grassland management and fertility.

Already, UK-based consultant Bess Jowsey  has visited the Tipperary holding and Body Condition Scored 70 cows. Another visit is expected in the coming weeks.

Joe hopes that the venture will push him to become “better and better”.

“We still have loads of room for improvement in areas such as grassland management and fertility, which I hope to improve vastly on over the next two-to-five years.

“Our intention is to have cows producing 500kg of milk solids and have a stocking rate of 3.3-3.5 LU/ha.

“Our biggest challenge now is to start recording absolutely everything – including grass and milk yield per cow. We now measure grass on a weekly basis and we expect to carry out our first milk recording in the near future,” he concluded. Click here for more information on LIC