The Beef Plan Movement is appealing to the country’s dairy farmers to join its nationwide protest aimed at rebalancing power and pay in the beef industry.

After entering a second week of protests at the gates of more than 20 meat plants across the island, members are now urging dairy farmers, vets, agri-feed companies and rural business owners to lend their voices to its cause.

Speaking to AgriLand at the entrance to ABP Rathkeale in Co. Limerick, Dermot O’Brien, chairman of the group’s south-west region, said numbers are growing.

We had well over 100 people last night in attendance; that means the protest is growing and that people understand the importance of coming out to protest.

“We would encourage everyone to come out – and not just farmers. We need the vets, the agri-feed companies; everyone that is earning a shilling off the back of a farmer has to come out here.

“We also need the businesses and people in the rural towns – everyone has to come out here,” O’Brien added.

“The support so far has been pretty good, and hopefully over the next two or three weeks, or for however long this protest is going to continue, we hope more and more will join us here,” he said.

While O’Brien acknowledged that there has been a number of clashes between some protesters and those driving across picket lines to deliver trailer loads of cattle to factories, he says that, under the circumstances, it’s “only natural” that some frustrations will flare.

“Farmers are very distressed and we understand that those emotions will come out at the picket line.

“If you have a situation where cattle are being sought by the factories from agents and they are going to approach the picket line, when farmers see those individuals approaching their feelings get hurt and there can be exchanges,” O’Brien argued. 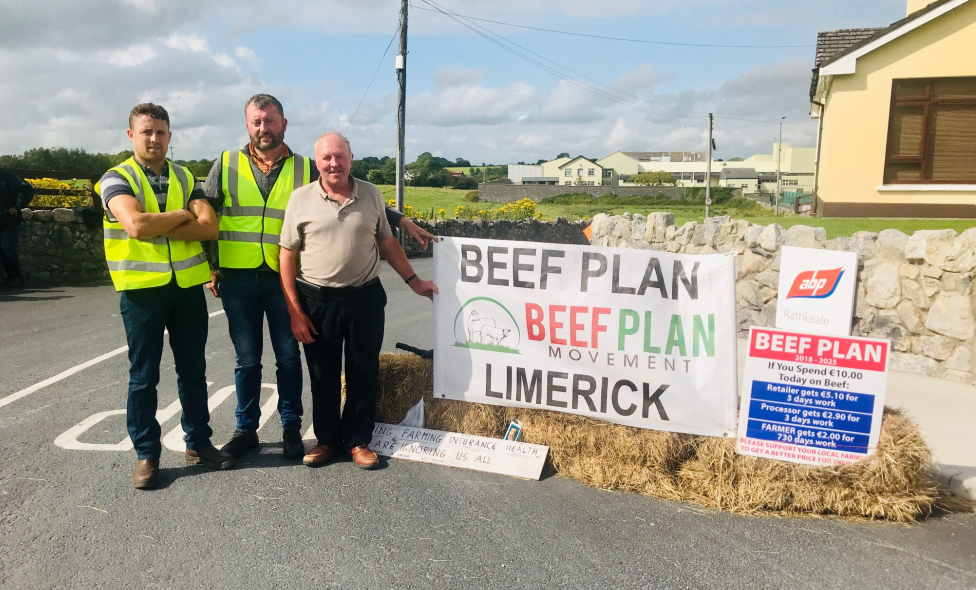 “It’s very important that people adhere to the guidelines that we are enforcing here – and which the Gardaí are working on with us very well – so we have a very safe environment at the protest here in Rathkeale and all throughout the south-west area,” he said.

The movement continues to dismiss the reaction from the Minister for Agriculture, Food and the Marine, Michael Creed, who stating that he “cannot legally intervene” on the setting of beef prices; it has also rejected Meat Industry Ireland’s (MII’s) position that it is open to talks with the movement on the precondition that its “illegal blockades” are abandoned.

Michael Quirke, a dairy-to-beef farmer from Milltown, Co. Limerick, is calling on his fellow dairy farmers to row in behind the plight of the country’s beef farmers.

“Every dairy farmer is needed here and they need to start coming out and realising that.

“Farmers are just going to have to take the hit and come out and stand among their equals – it’s now or never because sitting at home is not going to get us anywhere,” concluded Quirke.

'Nothing preventing minister from engaging with farmers'