Does the CAP benefit more than farmers? 62% of Europeans think so

More than six Europeans in 10 (62%) agree that the CAP benefits all European citizens and not just farmers.

In all EU countries with the exception of two, more than half of the respondents agree that the CAP benefits all European citizens.

But, less than half of respondents in France (45%) and the UK (49%) agree that the CAP benefits all.

More than nine out of 10 respondents in the EU (94%) hold the view that agriculture and rural areas are important for their future. 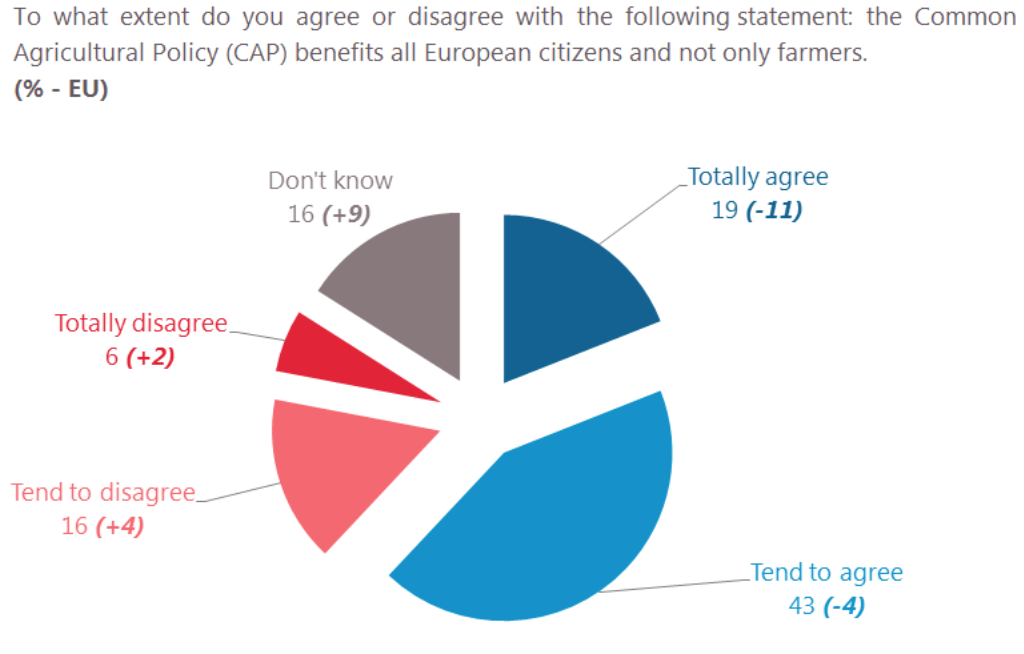 In 19 Member States, the relative majority of respondents consider the financial aid provided by the EU to be “about right”. This is particularly the case in Czech Republic (53%), Finland (53%) and Ireland (52%).

In 20 of the 28 EU Member States, more than half of respondents agree the EU is fulfilling its role in ensuring a fair standard of living for farmers. Respondents in Ireland (69%), Hungary (69%) and Malta (68%) are most likely to agree with this statement.

The Common Agricultural Policy (CAP) was introduced in 1962. It is a partnership between agriculture and society, between Europe and its’ farmers.

It is a common policy for all the Member States of the European Union and is managed, and funded from the resources of the EU annual budget, of which the CAP constitutes almost 40% of the total budget.

Respondents were asked to consider what they think should be the two main responsibilities of farmers in our society.

EU respondents are most likely to mention “supplying the population with a diversity of quality products” (42%) as one the top main responsibilities for farmers in our society.

In fourth position, “maintaining economic activity and employment in rural areas” appears to be of lesser importance to EU respondents (29%).

One in four mentioned a farmer’s main responsibility to be “ensuring the EU’s food self-sufficiency”; however, since 2013, support has declined by four percentage points to 25%.

More than half of the respondents (56%) in the EU hold the view that “ensuring agricultural products are of good quality, healthy and safe” should be one of the main objectives for the EU.

“Ensuring reasonable food prices for consumers” (51%) is second highest to be mentioned as one of the EU’s main objectives, followed very closely by “ensuring a fair standard of living for farmers” (49%).

Ensuring agricultural products are of good quality, healthy and safe is the most frequently mentioned objective for 16 of the 28 Member States, with the highest proportion of respondents citing this in France (72%), the Netherlands (72%), Malta (71%) and Luxembourg (71%).

Over four Europeans in ten consider the financial support provided to farmers to be “about right” (41%) with just under a third considering it be “too low” (29%) and 13% mentioning it be “too high”.