A new €3m grant scheme to help with the legal, advisory and financial services costs incurred by farmers in the drawing up of their farm partnership agreement, was launched by the Minister for Agriculture last week.

The Department recently established a new Register of Farm Partnerships that will cater for partnerships across all of the main agriculture enterprises which follows on from the old Milk Production Partnership Register maintained by Teagasc.

The Department says that already there are more than 850 farm partnerships who have applied to be placed on the new register since it opened in April, with some 550 being former milk production partnerships.

Former Milk Production Partnerships, either in whole or amended format, are not eligible for this Scheme.

All applications received will be subjected to a ranking and selection criteria, according to the Department.

Payment priority will be given to those of higher order in the event of the number of applications exceeding the funding available for the individual tranches.

Applicants must, however, receive at least 45 marks in order to be considered eligible for the grant (see marking below).

Unsuccessful applicants, who fail to receive payment in one tranche, may be considered in subsequent tranches. 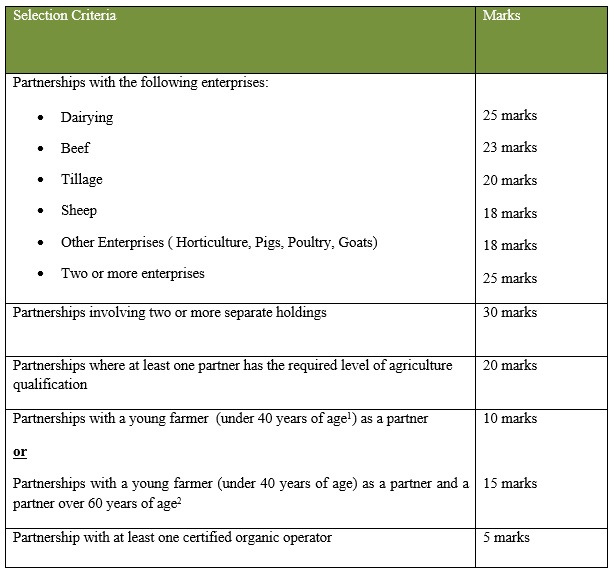 The payment will be calculated as 50% of vouched cost for each of the legal, advisory and financial services secured in the drawing up of the Farm Partnership Agreement, up to a maximum payment of €2,500.

Payments relating to the first tranche will issue early December 2015.