All farmers are subject to ‘greening‘ in the new Common Agricultural Policy (CAP) in terms of crop diversification, permanent grassland and ecological focus areas.

According to Department of Agriculture’s Paud Evans, who spoke at the Agricultural Science Association’s CAP funding seminar yesterday, the new greening payment will be calculated as a percentage of the basic payment scheme payment. Below is a brief outline of his detailed presentation.

Definition of separate crops means were also outlined by the Department of Agriculture official, which were different crops, winter and spring barley of the same crop, land lying fallow and temporary grassland. He noted that each hectare can only be counted once in a scheme year.

It was explained with the main crop, it can not be more than 75 per cent, with two main crops, not more than 95 per cent. He explained mixed cropping is regarded as one crop and landscape feature that form part of the eligible area can be taken into account in the measurement of areas of separate crops.

With regards to permanent grassland, Evans explained that under the new greening measure, it is defined as land, which is used for grass production for five years or more. It can be applied at holding, regional or national level and there is a required five per cent tolerance before mandatory conversion of arable land to permanent grassland is applied.

He explained that there will be a ban on ploughing and reseeding for production of arable crops of certain Natura 2000 area. He said this ban will apply to permanent grassland in these areas.

With regards to ecological focus areas in the new greening payment, Evans said in his presentation that farmers with 15ha or less of arable land will be exempt.

Evans outlined farmers with more than 15ha of arable land must ensure that at least five per cent of their arable land is an ecological focus area – known as EFAs.

Areas includes temporary grassland but also excludes permanent grassland with the exception of buffer strips and landscape features, which can be declared as EFAs, he said.

The European Commission will now present a report evaluating the effectiveness of Ireland’s measures by 31 March 2014. The proposals here may include an increase of the EFA minimum area from five to seven per cent but must be agreed by Council of Ministers and European Parliament, he outlined.

In terms of types of EFA, he said land lying fallow; landscape features, including those situated adjacent to arable land; buffer strips, including buffer strips situated in permanent grassland; short rotation coppice, no use of mineral fertiliser and/or plant protection products; and eligible SPS afforested areas; areas of catch crops or green cover; and areas of nitrogen fixing crops.

The Department of Agriculture official noted some issues arising or EFA areas such as: the land lying fallow issue of preparing land or sowing crop during autumn; hedges, up to 10 metres; isolated trees; trees in a line, distance between trees less than 10 metres or crowns with a minimum diameter of four metres.

In addition, field margins where there is no agricultural production, ponds maximum of 0.1ha, ditches which a maximum width of six meters and traditional stonewalls will also be of issue, he said. 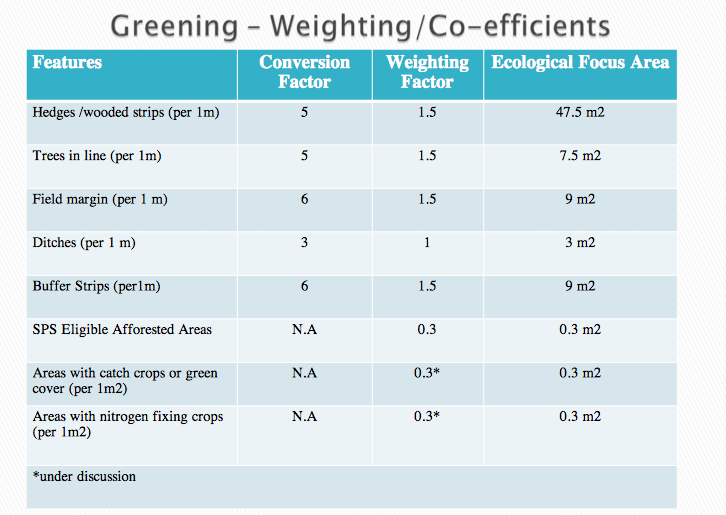