The single payment scheme (SPS) will be replaced by a basics payment scheme whereby all existing entitlements will expire by 31 December 2014. Ireland is also set to implement, greening, young farmers scheme, funding from the national reserve and coupled support for protein crops.

Evans outlined in his presentation that every eligible farmer will receive a basic payment, a greening payment, and some may also receive a young farmers scheme payment and coupled protein support.

The similarities of the SPS to the basics payment scheme include: entitlements are used, an annual application, declare eligible land, one hectare per entitlement, entitlements transferrable and the establishment of a national reserve.

The main differences, he said, was the entitlements will be subject to convergence, in that the value will change form year to year and there will be no consolidation and no ‘rotation’ of entitlements.

In terms of basic conditions, Evans said entitlements will be allocated to ‘active farmers only’.

Here he said the definition of an active farmer is firstly, a farmer rearing, growing harvesting, milking and keeping animals; secondly a farmers who is maintaining land in good agricultural and environmental condition; and thirdly minimum activity on marginal land, which has yet to be defined.

Evans said all farmers will be allocated an initial unit value in 2015 and by 2019, all low-value entitlements must reach at least 60 per cent of national average entitlement value.

It was also outlined that by 2019, no farmers will receive payment per hectare (BPS & greening) over €700 per hectare.

In terms of transfer of entitlements, the Department of Agriculture official said they were transferrable; that it includes transfer by lease ‘without land’; no ‘rotation’ of usage; they will revert if unused for two consecutive years, and no ‘clawback’ on transfers will apply.

In addition, he stressed the department is committed to assisting farmers in making the transition to CAP 2015; making available full information to all farmers; and producing a farmer’s CAP 2015 booklet this spring. 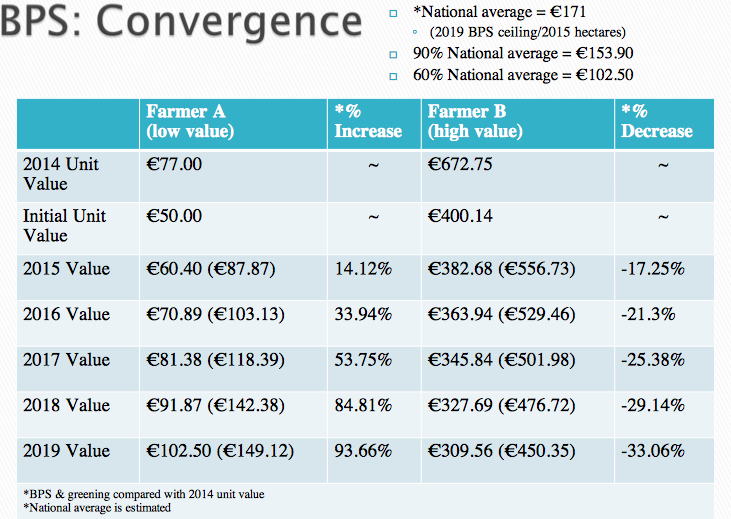 More reports to follow on ASA Cap funding conference on greening, young farmers scheme and the next Rural Development Programme