Dairy throwback: Farming ‘outside of the norm’ in Co. Limerick 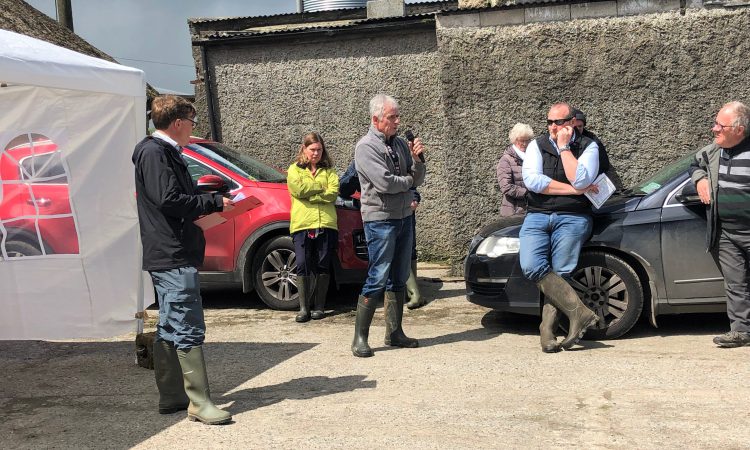 Today we will be taking a look back at Seán Condon’s organic dairy farm, which we visited on a wet Tuesday back in June.

Seán has been organic farming for the past 13 years and operates what he describes as a “very low-cost system of production”,with almost 100% of his milk coming from forage.

Dairy farming outside of Crecora, Co. Limerick, Seán wouldn’t be what you would call a typical Irish dairy farmer.

In 2005, Seán decided that he wanted to diversify his farm and generate a better income for himself and his family; so he began entering into an organic conversion and in 2007 the farm was recognised as a fully organic dairy farm.

During this time, he also switched his farm to a once-a-day (OAD) milking system; so that he could have extra time to spend with his young family. 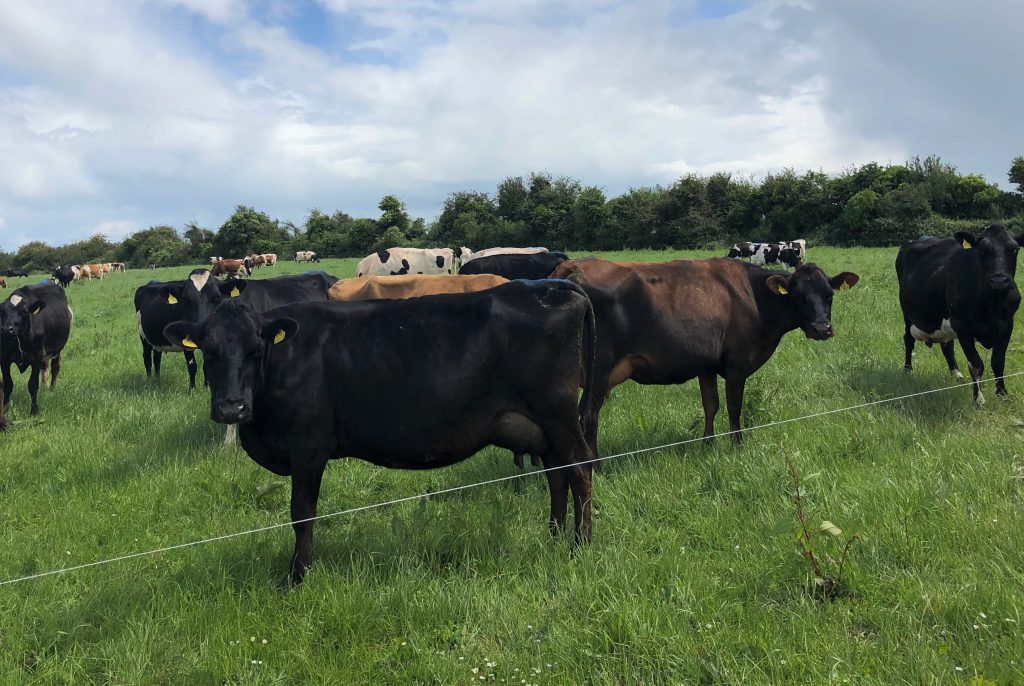 Seán now supplies his milk to the Little Milk Company – which makes organic cheese – and has also recently started selling some raw milk directly to shops and markets through the Natural Milk Company.

“Back in 2005, I had a conventional spring-calving herd; but, back then, if you wanted a better income it was difficult because quotas had you restricted.

“I always had an interest in organics and at the time I needed to do something in relation to housing. So I began looking into the organic sector,” explained Seán.

Seán milks a herd of 64 cows, which is made up of Friesian, Jersey and Norwegian Red crosses. The EBI of the herd is high at €130.

In a usual year, Seán would only feed about 6t of meal with the majority being fed towards the end of the year to support his raw milk enterprise. 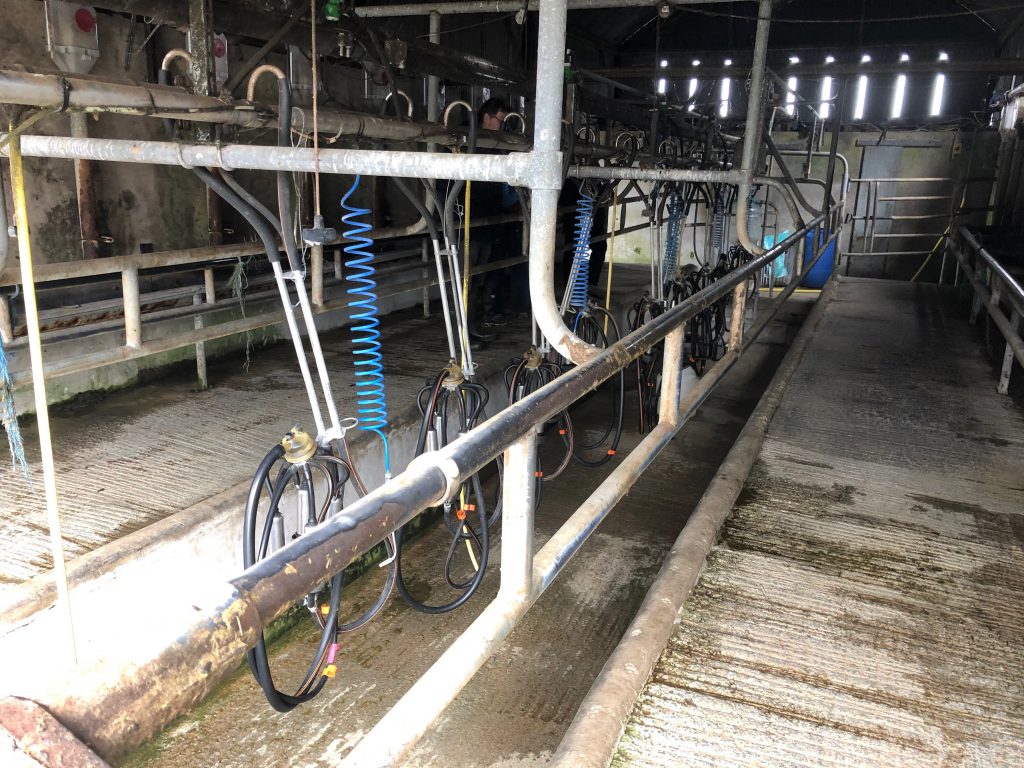 “During the drought I fed no meal, simply because the meal was costing €600/t, and I reckoned to get a good response I would have to be feeding over 3kg/cow.

“I feel it doesn’t pay to feed the meal, especially when you are milking OAD; so, it’s just whatever I get from grass,” explained Seán.

Seán sends the majority of his milk to the Little Milk Company at 42c/L on average; with the rest going for raw milk to the Natural Milk Company and Temple Roe Farm – which is his own farm label – at a price of €1.80/L. Through this he is able to achieve an average milk price of 63.2c/L.

In the last few years, I have decided to send some of my milk directly to the consumer – which brings up the average price I get for my milk.

The whole farm area is 59ha including the grazing platform, which is 36ha in size. He is currently stocked at 1.7LU/ha on the milking platform.

Seán – like many other organic farms – begins calving at the start of March to ensure he has enough grass available for the cows once they calve.

“The cows begin calving on March 1 and they go straight out to grass. If the weather is bad they go in at night and are out by day,” explained Seán.

The driver of grass production on an organic farm is clover. Clover has the ability to fix nitrogen (N) from the air into a usable form for the grass plant. 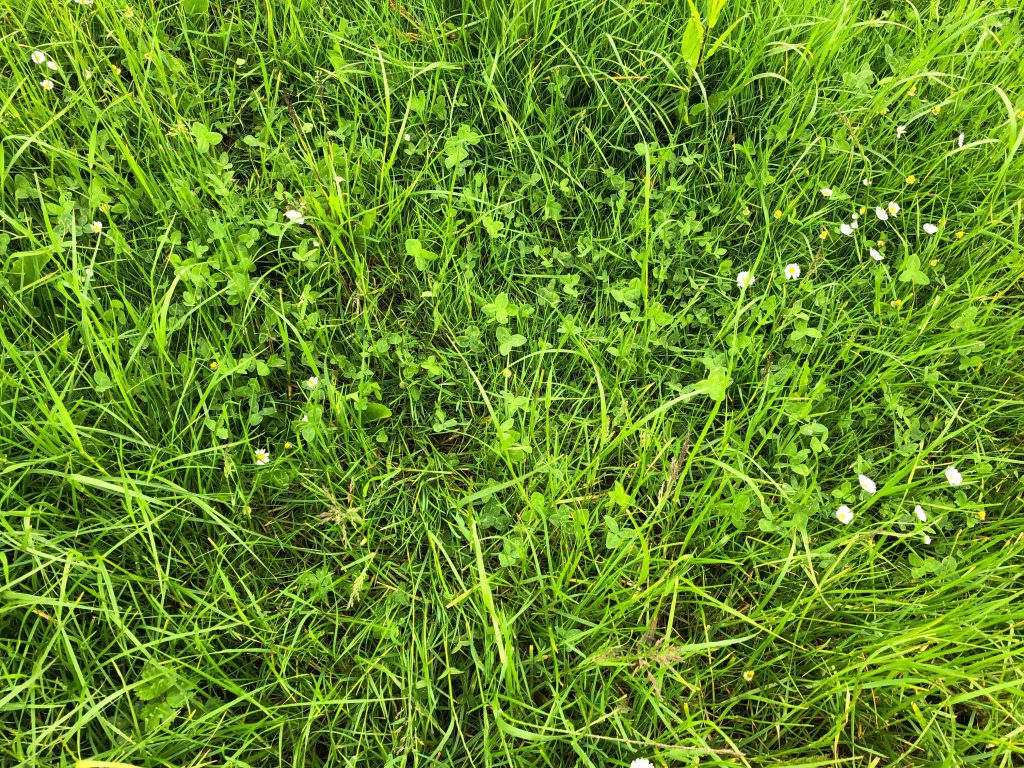 The majority of Seán’s paddocks contain red or white clover which add free N into the system. Seán is very dependent on the clover for the quantity and quality of the forage produced.

“I also alternate paddocks cut for silage because this encourages the production of the clover in the sward. I find the watery slurry in the spring is a great way to kick-start the clover for the year.” 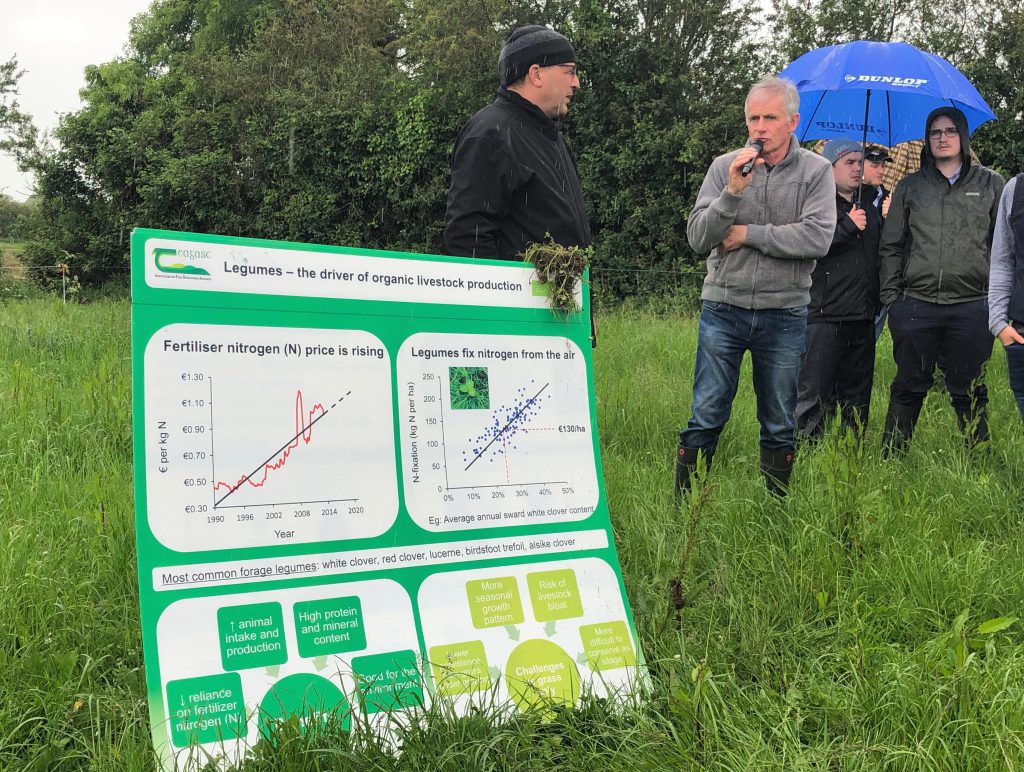 Answering the question on whether or not he has any issues with bloat, he said:

For silage, Seán has 14ha designated to silage and he takes out any strong paddocks off the milking platform throughout the grazing season.

Seán recently reseeded a 1ha field with a grass-clover-herbal ley for grazing. The mix contained 10 different species including two perennial ryegrass varieties (Rosetta and Dunluce), red and white clover along with a diverse range of other grasses and herbs.

The other species in the mix included: Timothy; Cocksfoot; Sanfoin; Chicory; Plantain; and Yarrow.

“I don’t know much about these types of mixes; but, I just wanted to try it out. Although I have heard good things about them in terms of their yields,” expressed Seán. 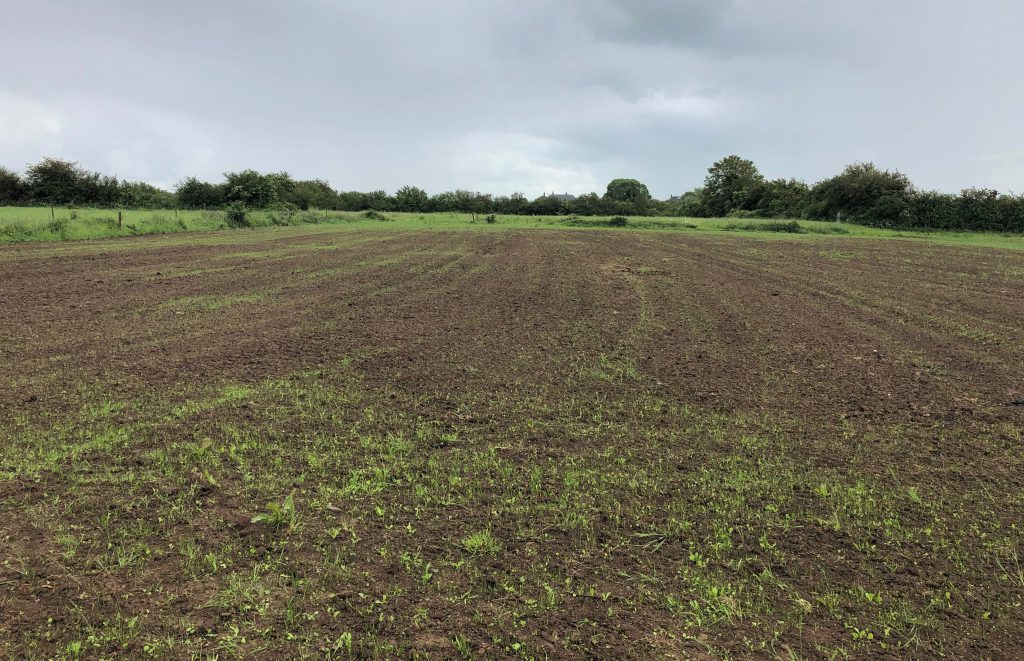 Explaining how he provides nutrients to the soil in an organic system, he said:

“The most important nutrient to me is straw. I would usually use around 230 bales in a year and that is a huge fertility booster for me – each bale contains about 1.5kg of potash.

“But apart from that, I use a limited amount of slurry. I usually spread the majority of my slurry in the spring and the dung in the autumn.

“I also don’t like spreading it in the summer because the cows are out grazing and it will taint the grass.

“I try to spread the slurry in the spring time and no paddock gets it more than once. In the past, I spread it with a splash plate but now I use a dripping bar – which I find much better,” he added.

In an organic system – if housing indoors – at least 50% of the housing facilities must be bedded.

For this reason, Seán’s housing facility contains a straw bedded area with a slatted area to the front – to collect slurry. 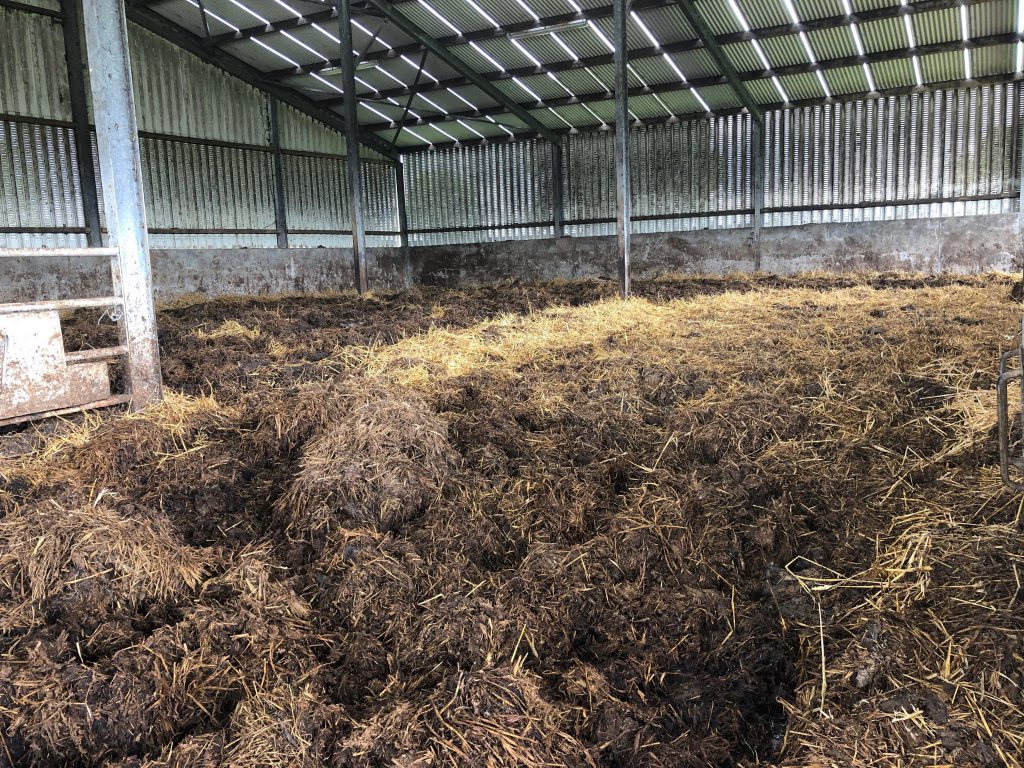 “I find the straw bed very good and I feel you have at least one more lactation in the cows with a straw bed because you have a lot less injuries and other issues.

“Last year, the bales cost me €30/bale, which was expensive but you can’t forget the fact that it has nutrients.

“Straw bedding is the best way in an organic system to bring in nutrients to the farm and if I had been organic farming for the past 13 years without using a straw bed, I would have the soil well depleted at this stage,” stated Seán.

“Weed control can sometimes be a bit of an issue because obviously spraying is not allowed. The only weed control I do is with the mower, where I basically just top the weeds. 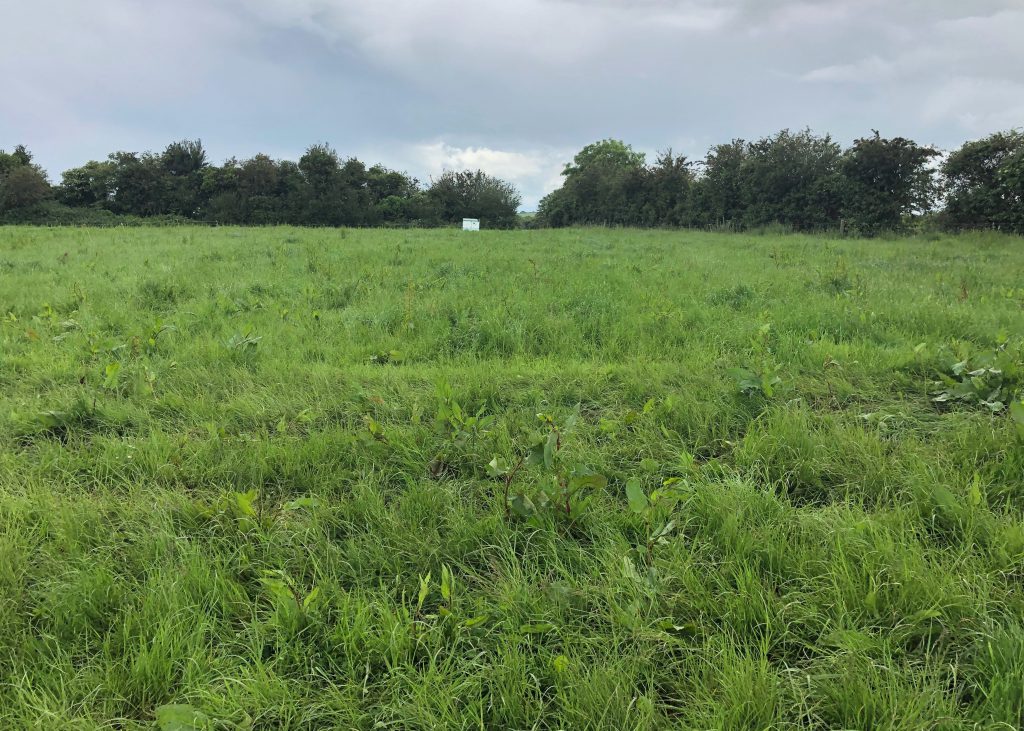 “You get weeds but in organic farming you don’t worry about weed control as much as conventional farming.

“In conventional farming you see a dock leaf and panic to get something to spray it; but in organic farming you can just do that with the topper,” concluded Seán. 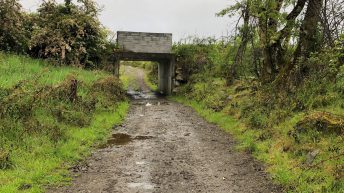 Infrastructure focus: ‘A cheap and cheerful underpass’ in Co. Cavan