In this week’s Dairy Focus, AgriLand caught up with Gerard Brickley from Coolrain in Co. Laois who milks a herd of pedigree Fleckvieh cows.

Gerard along with his wife, Angela, started milking cows when milk quotas were abolished in 2015; the duo began milking a herd of Friesian cows before switching to Fleckvieh cows a year later.

Before that, Gerard worked for Bord Bia, which saw him work abroad for many years, where he was able to build up contacts, that in later years would end up helping him to build his own herd of Fleckvieh cows.

In terms of the system, the Brickley’s opted to install a robotic-milking machine, while also deciding to keep the milking herd indoors all-year-round, because they felt it suited a robotic system better.

On the other hand, the young stock and dry cows are out on grass. In total, the farm stretches 80ac – all in one block.

Speaking to AgriLand, Gerard said: “Before 2014, we ran a pedigree herd of predominately Simmental and some Charolais cows.

However, even at that time, when beef prices weren’t as bad as they are now, the sums weren’t adding up to say to me that this was the way forward for us.

“So, we sold our suckler cows and bought a batch of Holstein Friesian heifer weanlings and began work setting up the farm in a way that would allow us to go milking, such as installing a robot and converting an existing shed into a cubicle house.” 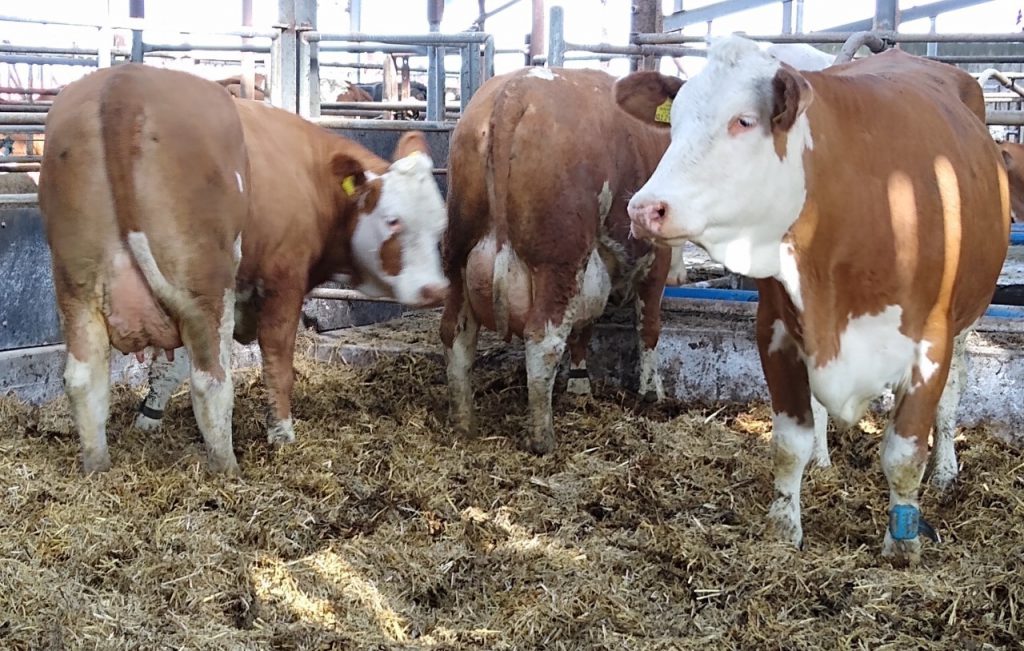 Going from Friesian to Fleckvieh cows

The Brickley’s began milking their herd of first-time calving Friesian cows in 2015. However, having worked in Germany and Austria, Gerard began researching and looking for a breed of cow that would produce good volumes of milk but, also, produce a good-quality calf.

This led to him buying in pedigree Fleckvieh cows from farmers in Austria who he had met while working out there.

He also visited farms in Northern Ireland and the Netherlands that were milking crossbred Fleckvieh cows to increase his knowledge of them and to see how they were performing.

Therefore, gradually, over the last few years, Gerard has imported a number of pedigree Fleckvieh cows that have seen his herd grow from originally 15 cows up to 60 cows.

In total, Gerard is milking 70 cows, 10 of these consist of Holstein and Fleckvieh cross cows.

Over the years, Gerard crossed some of the original Friesian cows that he bought initially with Fleckvieh bulls.

Speaking about the switch from Friesian to Fleckvieh cows, Gerard said: “In my opinion, the Fleckvieh breed offers a number of advantages in comparison to the ‘black and white’ cows.

They’re a very robust cow and they almost produce as much milk as a Holstein cow would, but they have better fertility and physical strength to withstand any knocks that come their way.

“The dual-purpose element of them, for us, gives a higher and more balanced income. This isn’t me just talking up the breed because I milked Friesian cows, so I can clearly see the differences between the two breeds.

“They also produce nice square calves which I think are very suitable for beef production.” 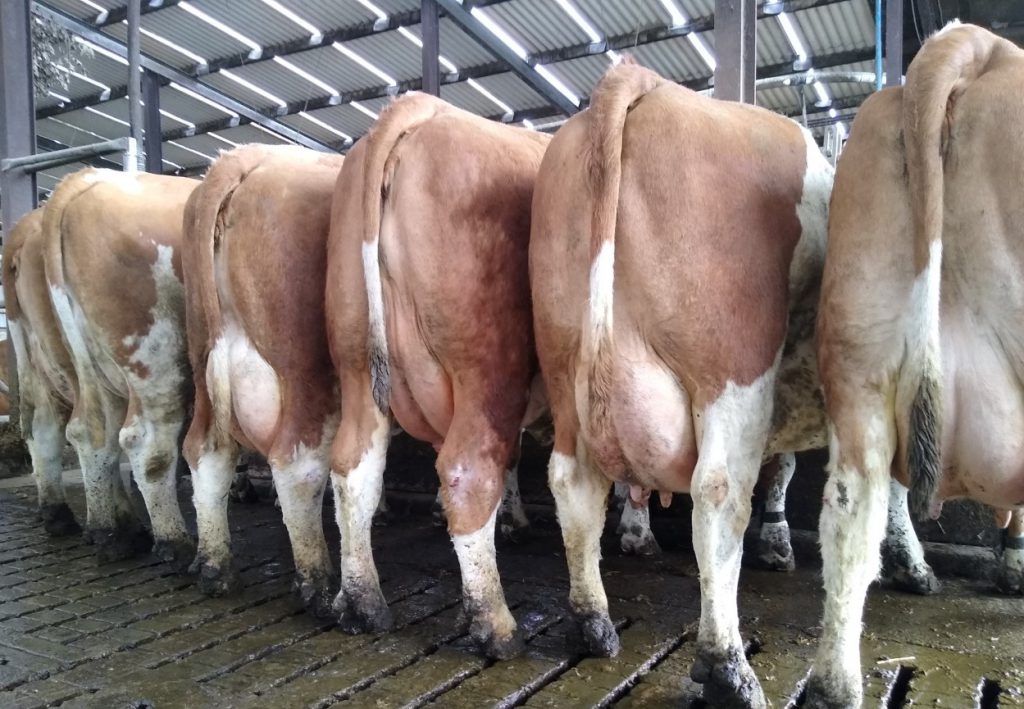 Going against the grain, the Brickley’s decided that they wanted to keep their milking cows indoors all-year-round.

Speaking about this decision, Gerard explained: “First off, we decided to go with a robotic-milking system because it takes the hard labour element out of milking.

“Secondly, we run our own AI business, which takes up quite a bit of time, so in order to go down the route of milking cows we had no choice but to install a robot.

“The reason for keeping the cows indoors all-year-round is down to management. It’s an easy system to manage and the cows produce good volumes of milk.

It is a more expensive system to run, but the higher output that we are getting from our cows helps to balance the extra costs that are involved.

“We find the system is much easier to run than if we were to let them out on grass. Once the cows are fed and the cubicles are limed then there is very little other routine physical work that has to be done with the cows – except obviously at calving or at breeding time when it is busy.” 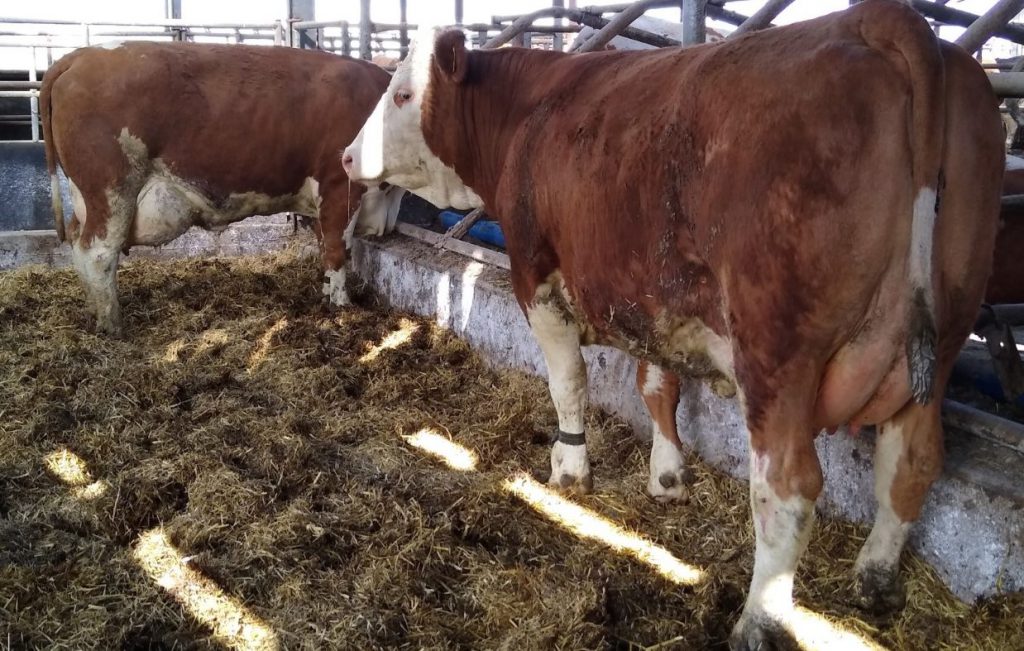 The Brickley’s operate a split-calving system that sees them calve down cows in autumn and spring, which allows them to produce milk all-year-round.

A larger proportion of the herd calve in spring. The pedigree Fleckvieh heifer calves are kept as replacements; whereas, the bulls that Gerard feels are fit for breeding are kept and sold to farmers at between 12 and 14 months-of-age.

Any bulls or heifers that he doesn’t feel are fit to breed off, are kept and finished for slaughter. The Fleckvieh bull calves from the crossbred cows are sold at the mart.

Gerard added: “We sell the crossbred calves at our local mart. On average, we would make €330/head for them, which is a great price in comparison to what your typical Friesian or Jersey calves would make at the mart.

“The crossbred calves would have a fairly good frame, obviously not as good as the purebred Fleckvieh calves, but, still, they would be suitable for farmers looking for calves to rear and finish for beef.” 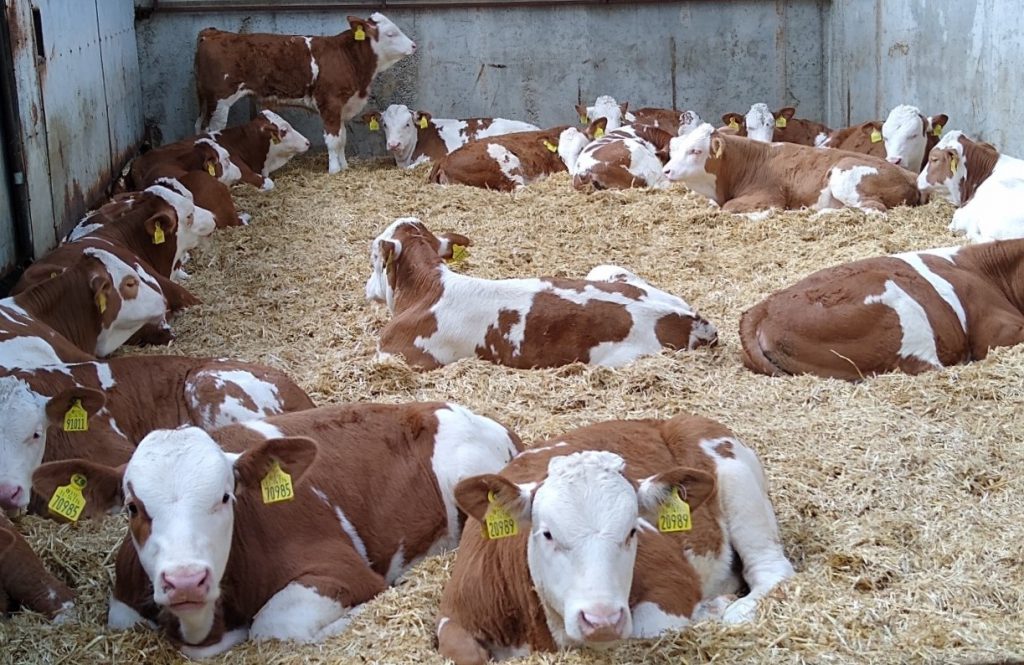 At the time of writing, the breeding season had kicked off on the farm. The heifers and mature cows are bred artificially with semen from the “top Austrian Fleckvieh bulls”.

The Brickley’s supply Fleckvieh semen to farmers across the country, having built up their own business – Celtic Sires.

Gerard and Angela are both qualified AI technicians, so they can carry out all the breeding on the farm themselves. 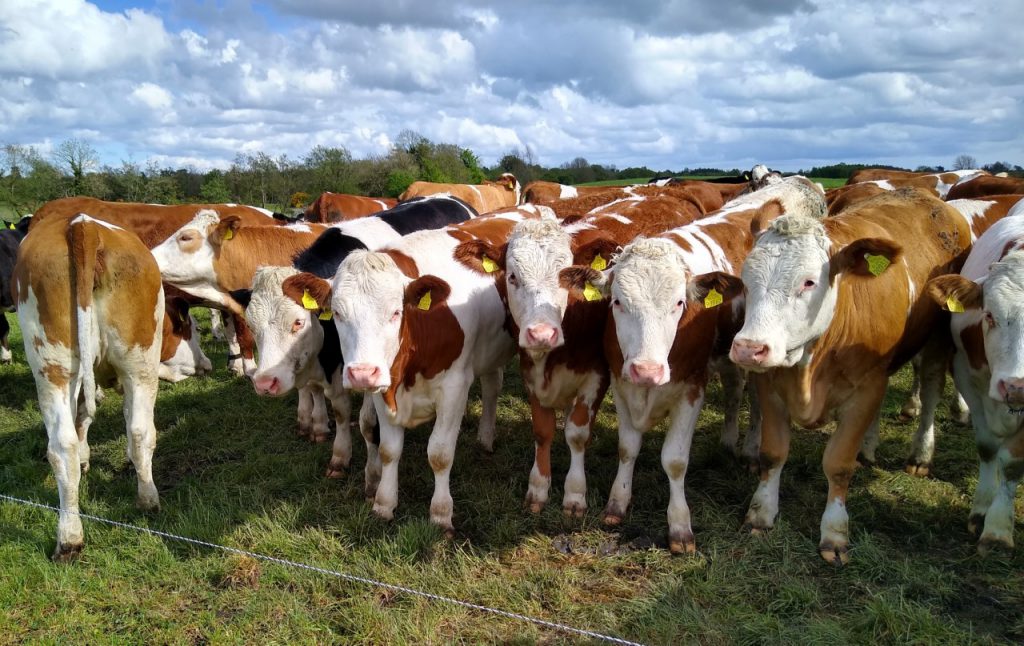 Gerard has been very happy with the performance of his herd over the last few years. He puts a lot of this down to buying in the best genetics at the start and culling any animals that didn’t make the grade as early as possible.

At the moment, the spring-calving herd are producing 36L of milk at 4.2% and 3.2% protein. All in all, I am very happy with how they are performing.

“A number of factors, in my opinion, are contributing to these results such as the genetics of the herd and the diet. We have a nutritionist that comes in and puts a feeding plan in place for us that seems to be working well.”

Improving the carbon footprint of the farm was another reason for Gerard being drawn to the Fleckvieh breed.

He said: “The majority of dairy farms in Austria milk Fleckvieh cows. Austria is number one in Europe for having the lowest carbon footprint for dairy production [joint first with Ireland].

“However, looking at the beef side of things [in terms of the carbon footprint], Ireland is fifth in Europe while Austria is number one. So, I think that shows just how efficient the Fleckvieh breed is at producing both milk and beef.” 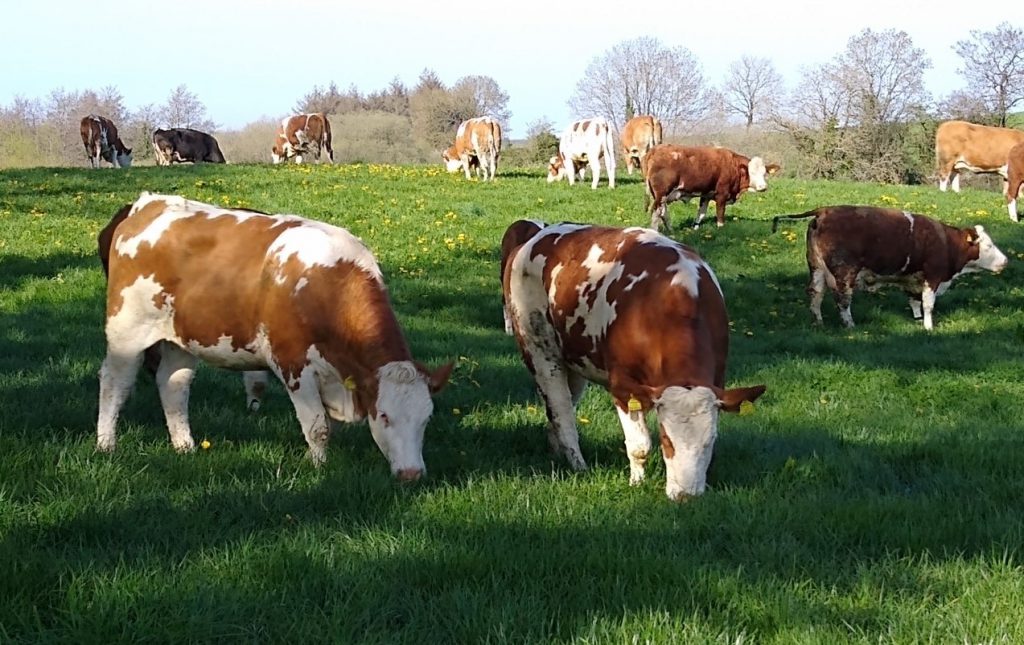 Looking back on the decision to move away from sucklers, Gerard has no regrets. The only thing that took him by surprise was the cost that was involved in changing systems.

He explained: “Both Angela and I have no regrets in changing systems. The farm was set up perfectly for dairy farming, so it made sense.

The cost that was involved in changing systems was a bit of a shock I have to say. However, looking back now and having five years of milking cows or so behind us, the decision was the right one.

“The system we are running provides us with income from three different sources, which include: milk from the cows; the calves and cull cows we sell to other beef and dairy farmers; and the semen we sell from the Austrian Fleckvieh AI stations.

“So, all in all, it has worked out well. What swung our decision was back in 2014 when milk quotas were set to be abolished the following year.

“We realised that there were going to be fewer suckler cows in Ireland, which meant there would be less customers for our beef bulls, which was going to have a huge impact on our business. In truth, it wasn’t viable to continue with what we were doing.”