The duo have been milking cows since 2013, when Tom made the decision to change systems and buy a second-hand six-unit parlour.

The Clesham family milked cows up until 1990 when Tim decided to change systems and start up a commercial suckler herd, which allowed him to expand his other business – Ashford Equestrian Centre.

In the years that followed, Tim and Tom began to breed pedigree Limousin cattle alongside the commercial herd of cows.

However, over time, Tom became frustrated with the volatility of the beef sector, and he felt, that in the long run it wasn’t viable to continue beef farming.

So, after 23 years, he decided that the only way forward for the farm was to go back milking cows.

He said: “I was becoming a bit disheartened with the beef game and I felt for the work I was putting in, especially when it came to the pedigree herd, I wasn’t making the returns that I felt I needed to make it worth my while.

“At the time, when we went back milking cows, my father was beginning to take a step back from farming. He still works off-farm a few days a week, so I suppose I have taken over the responsibility of running the farm full-time.

“My grandfather and father used to milk cows years ago, so the farm here was set up in a way to go back doing that and in 2013 I took the chance and went for it.

I bought a couple of cows from three different herds and I also bought a second-hand six-unit parlour as well.

“Over the last few years, I have been doing bits around the place to get the farm to where I want it to be and, thankfully, it is getting there.

“I started off milking just over 20 cows in 2013 and now I’m up to 46. The plan is to get up to around 72 cows, which I would be comfortable at. However, that would involve adding two-units to the parlour and putting in a bigger bulk tank.” 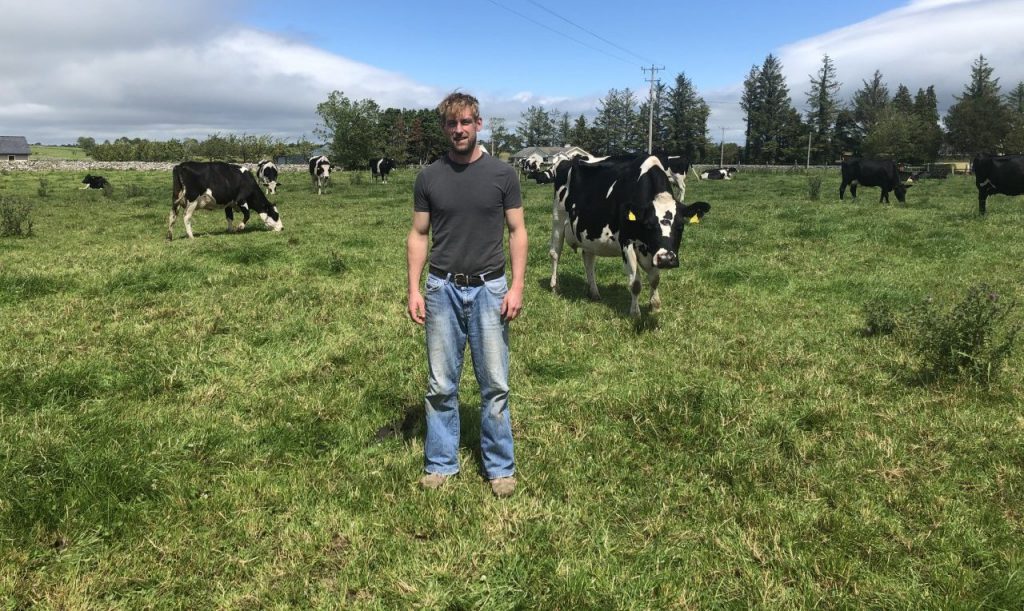 Tom and his father Tim run a spring-calving herd that consists mainly of British-cross Holstein Friesian cows; however, there are a few Montbéliarde-cross and Jersey-cross cows mixed through the herd as well.

The milking platform, which consists of 31 adjusted hectares, is all in one block and it is serviced by a new roadway that Tom put in not long after he converted back to milking cows.

All of the bull calves are sold. The majority are sold privately off the farm, while a few are also sold at the local mart.

This year, he kept 17 heifer calves; however, not all of these will be kept as replacement heifers and introduced to the milking herd. Instead, Tom says he will only pick off the best and sell the rest of them in-calf.

At present, the breeding season is winding down on the Clesham farm. A teaser bull is currently running with the herd.

Tom carried out all the breeding on the farm. All the cows were AI’d, which lasted for six weeks. Over the last few years, he has used sexed semen on the heifers. However, according to Tom, it has been a bit ‘hit and miss’.

The hope is that, in the future, he will be able to move up to just over 70 milking cows. 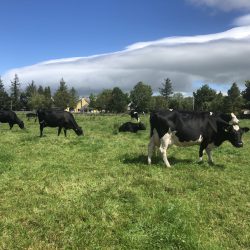 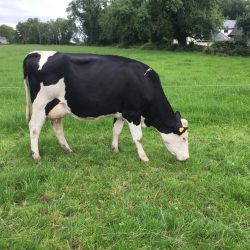 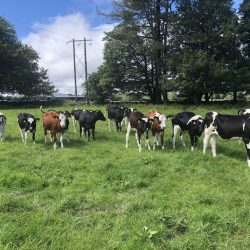 As already mentioned, in order to get back milking cows again Tom had to invest in a number of areas across the farm to make it work.

A second-hand parlour and bulk tank had to be purchased, along with upgrading the roadways around the farm, which hadn’t been maintained all that well during the years when there were suckler cows on the farm. 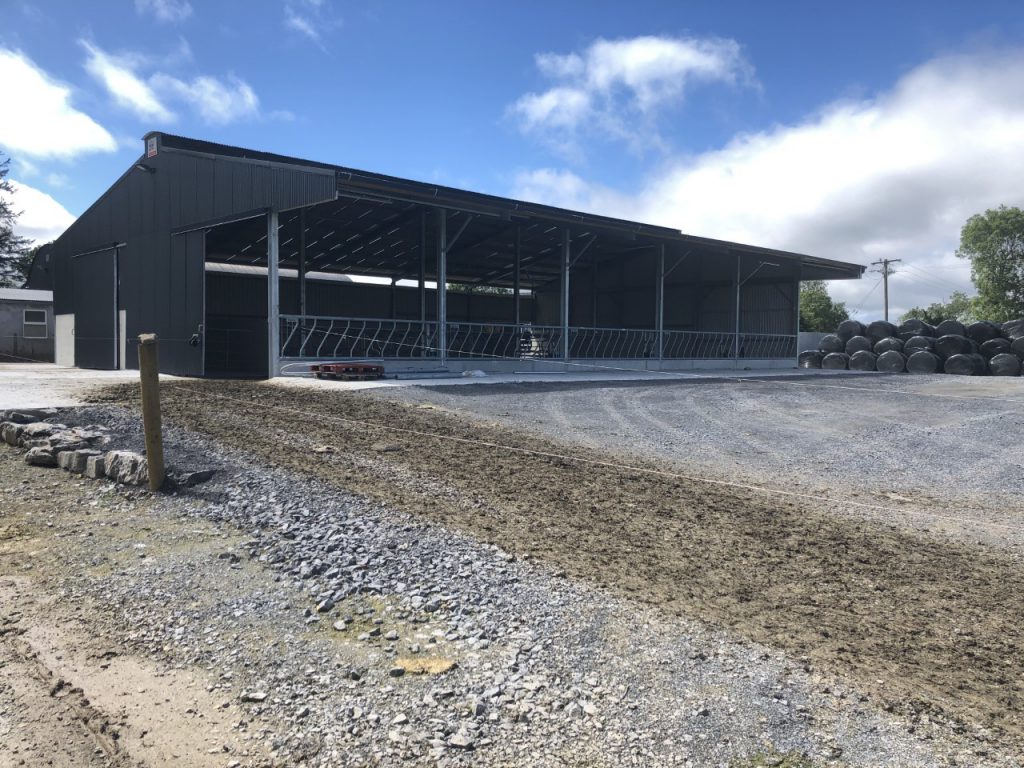 A new cubicle shed has been recently built on the farm to facilitate the increase in cow numbers.
Also Read: Buildings Focus: A new 43-cubicle shed for an expanding dairy herd in Co. Mayo

A large proportion of the farm has been reseeded as well over the last few years. Last year, 12ac was reseeded and Tom says he has been very happy with how the paddocks have performed since then.

The hope is that in the next couple of weeks that another one or two small paddocks close to the parlour can be burned off and reseeded. 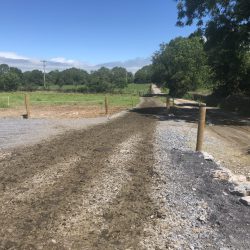 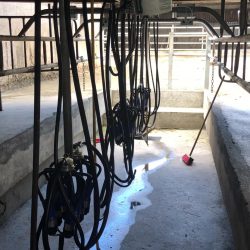 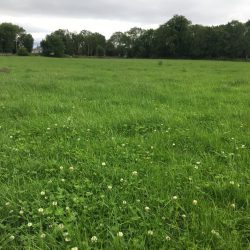 ‘Striving for a cow that will produce 500kg of milk solids’

He added: “The cows are performing well. I am particular about what cows I keep and I would say that I am strict when it comes to culling.

“If a cow isn’t producing the goods or has a high somatic cell count [SCC], she is gone. I achieved good numbers last year and this year has followed a similar enough pattern.

The cows are getting access to good-quality grass. I wouldn’t be big into grass measuring but in saying that I don’t let them into massive covers of grass either – I try to take them [heavy covers] out for bales.

Tom added: “I also have reseeded a nice bit of the farm with a mix of perennial ryegrass and white clover, which seems to be working well.

“Furthermore, around peak time, in May, they were doing about 27L, on average before the dry spell kicked in. It’s worth noting that they were only on 1.5kg of concentrates at that time.

“I’m feeding them 3kg of nuts these days. Overall, I am very happy. During the dry spell I was lucky in that I had a good bit of grass to keep the cows ticking over and I wasn’t really affected as badly as other people were.

“Only a couple of paddocks got burned. I didn’t have to feed silage, but I was feeding up to 6kg of concentrates at that time.” 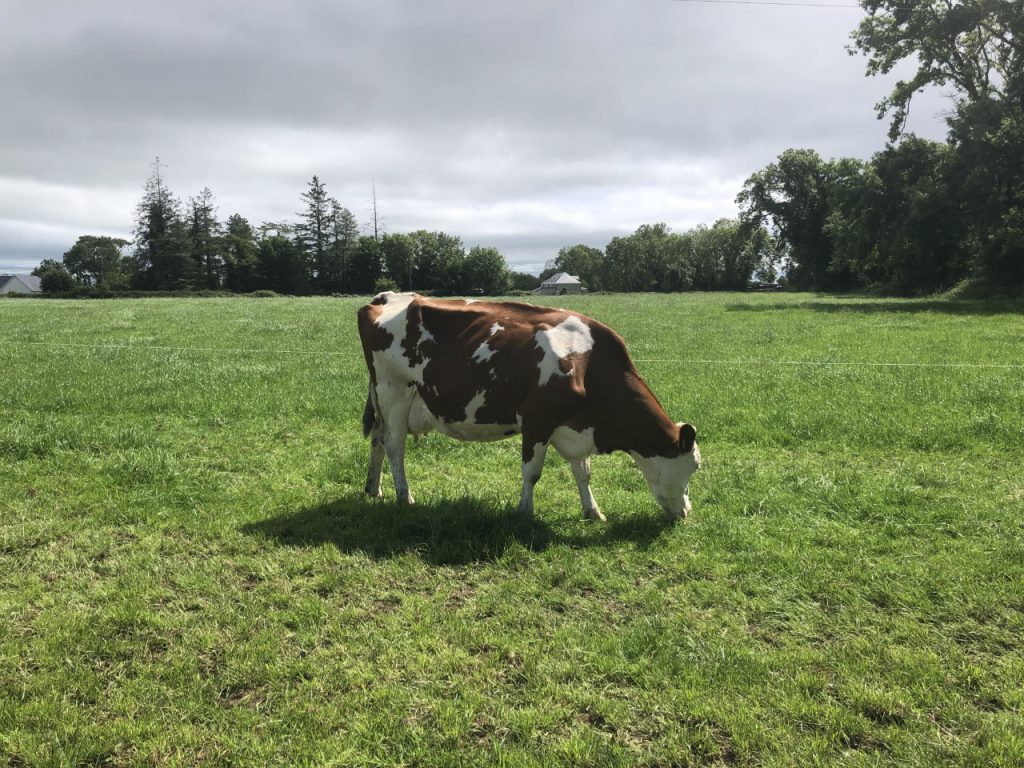 ‘Milk recording is a must’

On the topic of milk recording and the incoming ban on the blanket use of antibiotics at dry off in 2022, Tom said that milk recording is ‘a must’ and that he plans to take his first steps towards selective dry cow therapy this coming year.

He explained: “I have a low SCC, about 43,000 cells/ml, on average and a lot of that is down to milk recording and being strict when it comes to culling ‘problem cows’.

Milk recording is a must. I have had two already this year and I plan on having another two before dry off.

“I am anxious to do one just before drying off, so that I have an idea of what cows I will be able to carry out selective dry therapy on and what cows will need antibiotics.

“At the moment, I have no cows that have a ridiculously high SCC, but it’s important to keep on top of it and carry out milk recording as much as possible.” 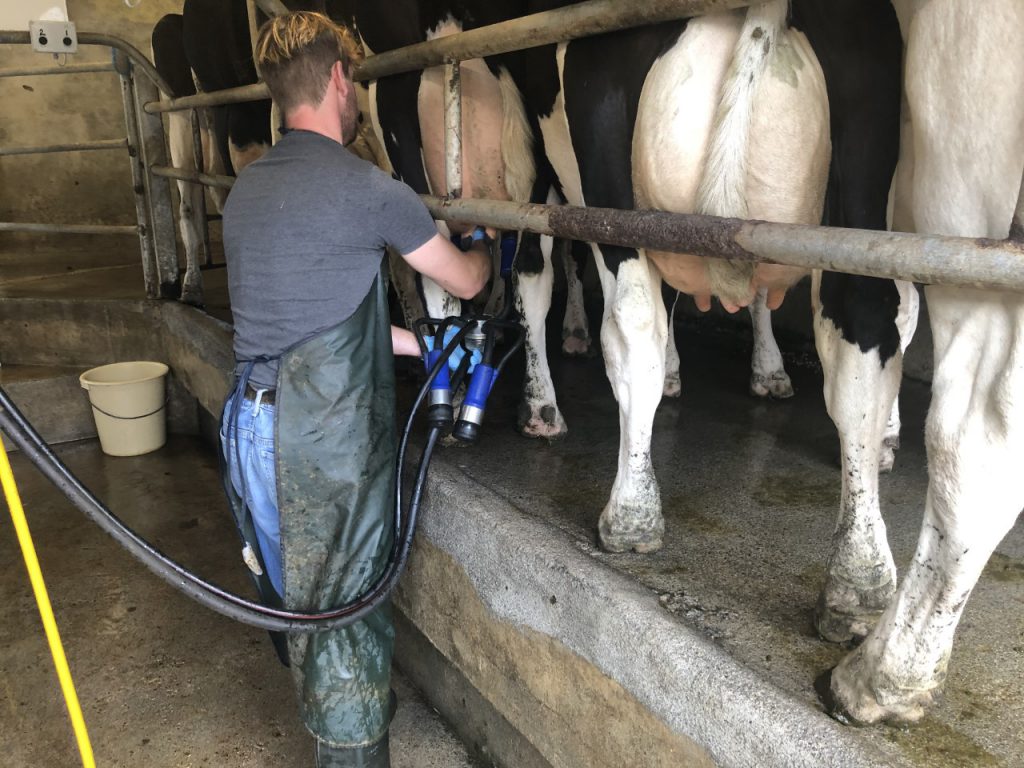 He explained: “I won an award last year from Animal Health Ireland in account of my herd having a low SCC, so I want to keep it that way.

I plan to carry out selective dry cow therapy on cows that have an SCC of less than 70,000 cells/ml. However, I am only going to try it out on a few cows.

“I want to test it first and see can I implement it correctly. The last thing I want to do is mess it up and end up having a large proportion of the herd picking up infections.

“I am very conscious about keeping the sheds clean over the winter, during the dry period, and I’ll be even more particular once I start implementing a selective dry cow plan.

“I regularly lime the cubicles. I strip the cows morning and evening when they come into the parlour and make sure they are clean before putting on the clusters. I just do the simple things right and, thankfully, it seems to be working.

“You have to be on your toes because cows that have a high SCC cost you money.” 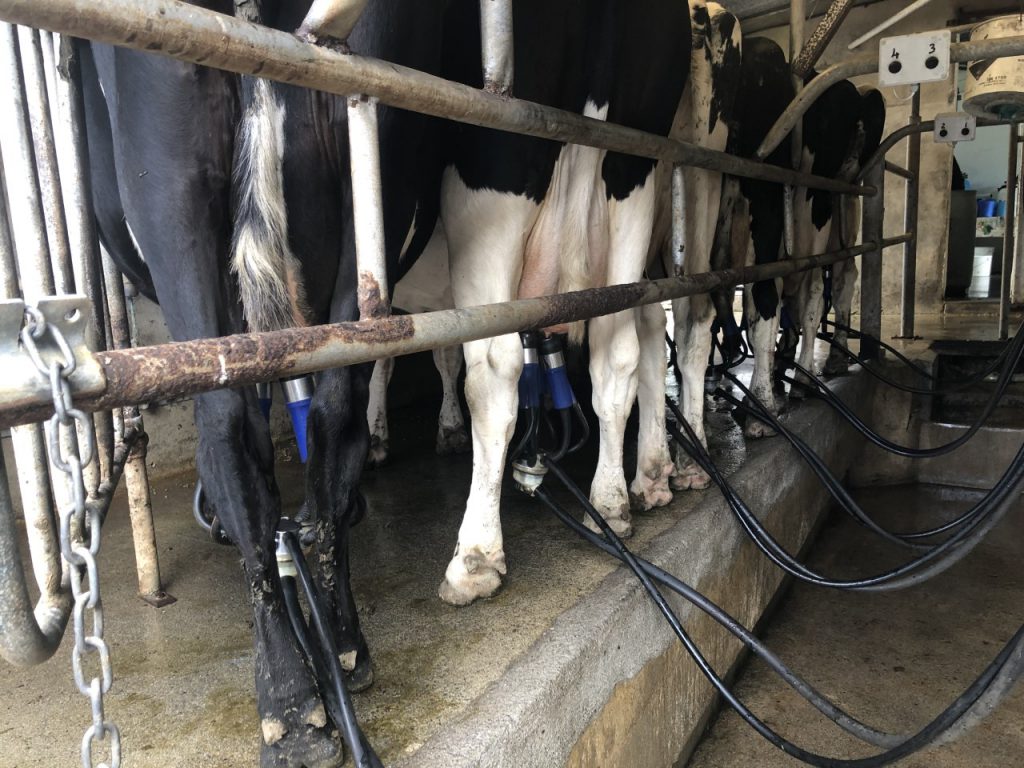 Increasing cow numbers when the right opportunity presents itself

Tom is keen to increase cow numbers as already mentioned. He has no problem in expanding his six-unit parlour to eight-units when the time arrives or putting in a new bulk tank.

The problem is how he is going to go about increasing cow numbers. The two options he has looked at are taking on more land if it came available close by or not keeping any stock other than milking cows on the farm and buying in freshly-calved cows.

Tom added: “My local advisor and I have sat down and discussed what my options are for me to expand to 72 cows, which would equate to nine rows of cows in the parlour – which would be ideal.

“I have a low stocking rate, so I can handle the extra cows, but I won’t be able to hold dry stock if I do go up in cow numbers.

“I don’t see myself getting a farmer to contract rear my heifer calves because I think it’s a bit too expensive to do so as of now; I can only think of either taking on more land or buying in cows that have calved down.” 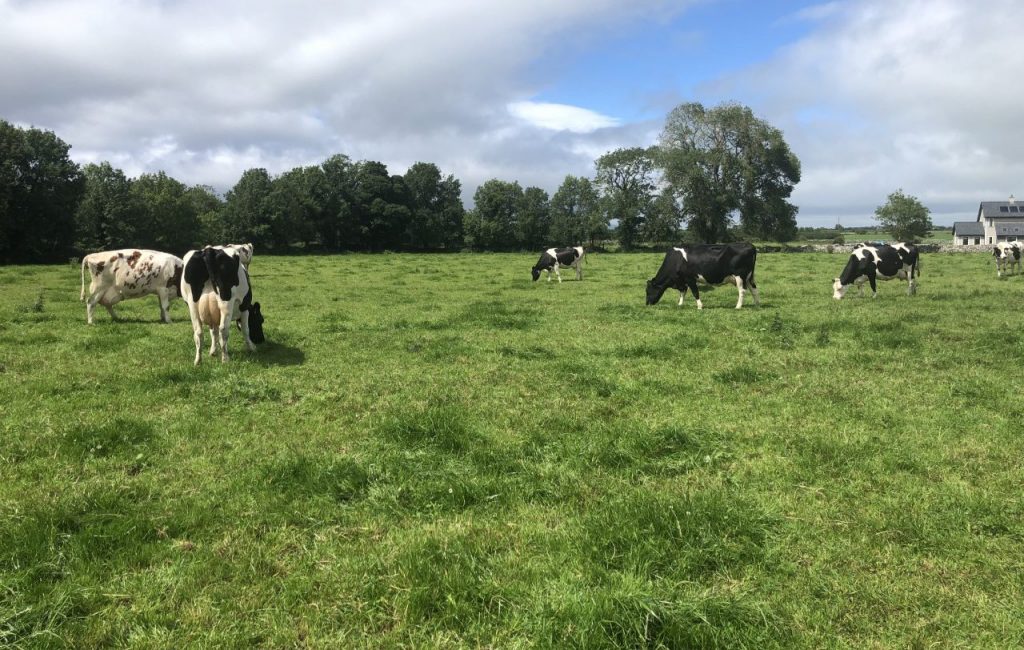 He added: “The worry about buying in cows is the unknown. You don’t know what your bringing into the farm. Ideally, if I was to go down that route, I would try and build a relationship with a farmer and try and buy cows off that same farm every year.

“But, where do you start and how do you go about doing that? I ‘d be worried about bringing cows in that would have a high SCC.

I can tell you for sure I won’t be rushing into anything. I’ll weigh up my options and go from there. I’m not going to jump from the 46 cows  I have to 72 cows within the space of a year, it will be over a few years.

“I started from scratch, basically, in 2013 so I don’t mind having to wait a bit longer before I reach my limit in terms of cow numbers.” 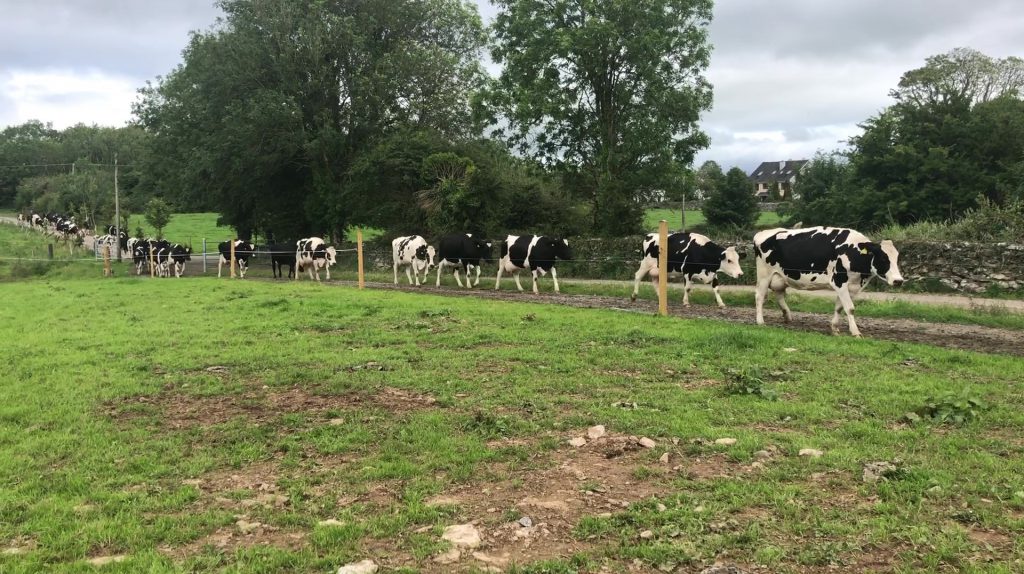 Are your heifers achieving their target weights?

Are your heifers achieving their target weights?