Chairs from all around the country’s dairy co-ops are expected to meet tomorrow (Wednesday, November 14) to discuss the recent launch of Glanbia’s ‘Truly Grass Fed’ dairy brand in the US, AgriLand understands.

The meeting – due to take place in Portlaoise – will commence without management representation from the respective dairy co-ops.

The gathering will coincide with a meeting of the board of Ornua, where concerns are expected to be raised over any potential challenges that Glanbia’s new US venture could pose for the Kerrygold brand stateside.

Last week, John Jordan, the CEO of Ornua, warned that Glanbia’s Truly Grass Fed brand could “erode value” for Irish farmers by “undercutting” Kerrygold on price in the US cheese market.

Commenting on the matter, Jordan said: “Truly Grass Fed from Glanbia’s position has a very nice story to it – in terms of this they believe there is an opportunity in the market outside of the Kerrygold brand.

We would fundamentally disagree with that. The fact is, despite how that story is constructed, Truly Grass Fed is in the mainstream retailers.

“It’s on the shelf beside Kerrygold and it is retailing at a discount to Kerrygold.

“Our concern is that that is going to erode value for the Irish dairy industry and for Irish farmers,” he said.

“It is important to note that the total US cheese market is worth $15.3 billion per annum.

“As its largest shareholder Glanbia is and will continue to be a strong supporter of Ornua and Kerrygold – but our farmers have invested heavily in their farms and we need to maximise returns from the market for their growing milk volumes.

It is understood that Glanbia initially approached Ornua with its proposal for its Truly Grass Fed brand some time ago.

It is understood that Glanbia asked the Irish agri-food cooperative – which markets and sells dairy products on behalf of its members, Irish dairy processors and Irish dairy farmers – if it would support the venture.

However, it is understood that the proposal for the niche brand was rejected by Ornua.

As such, with an already significant foothold of sister businesses in the US that deal with retail, food markets, supermarket chains and gyms through its performance nutrition business, Glanbia decided to launch the brand independently of Ornua. 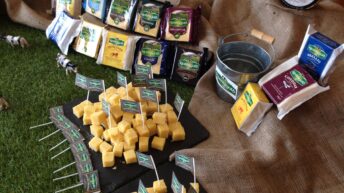 Ornua on Glanbia’s US venture: ‘We fundamentally disagree’