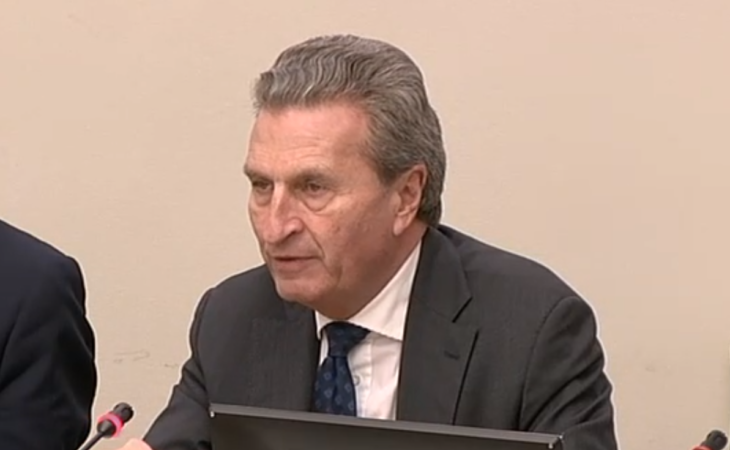 European Commissioner for Budget and Human Resources Gunther Oettinger has said it will be impossible to avoid cuts to the next budget – including cuts to the Common Agricultural Policy (CAP).

Speaking to the Joint Committee on Finance, Public Expenditure and Reform earlier today, the commissioner said that it was likely that cuts would be made to CAP of between 5% and 10%.

This is needed to plug the budget hole left of between €12 billion and €14 billion per year by Brexit, he said.

The commissioner proposed a 50-50 combination of budget cuts and increased member state contributions to absorb the UK’s contribution.

Asked by committee member and Sinn Fein TD Pearse Doherty what one is supposed to say to a farmer in west Donegal, who has an average income of €6,000, that their supports are going to be cut – redirecting the funding into defence and military spending instead – the commissioner responded:

I would like you to come with me to Amsterdam or to Copenhagen or to Stockholm; all of these member states are saying we need cuts up to 30%. I am the moderator and your partner, with 5% up to 10%. You can be sure; let’s wait and see.

Regarding increasing contributions from 1% of GNI (Gross National Income) to 1.1% or 1.2%, the commissioner said: “We are working with 1.1X% because some things are not clear.”

Deputy Doherty also asked what would be required in terms of contribution increases in order to avoid cuts to the MFF (Multiannual Financial Framework).

Oettinger stressed that Irish politicians must do more to convince other member states of the importance of agriculture to the union as a whole, adding that it was not by accident that an Irish candidate was put forward to lead the European Commission for agriculture.

The budget commissioner said that he has a close relationship with Phil Hogan and that the next MFF would be developed by both of them in cooperation.