Cutaway bogs to be absorbed into decarbonisation programme

There has been much discussion about Bord na Móna cutaway bogs in recent times and what the semi-state body plans to do with them.

Last October, the company announced that it would cease using peat for energy by 2028. The company confirmed, at that time, that it was accelerating moves away from its traditional peat business into renewables, resource recovery and new sustainable businesses.

Bord na Móna’s head of land and property, Stuart Conaty, told AgriLand this week that rehabilitation is the key word when it comes to the future of some of the country’s most well-known cutaway bogs.

He also pointed to the company’s renewable energy programme and how it will absorb the cutaway bogs “as much as possible”.

Bord na Móna, meanwhile, owns 80,000ha of bogland in Ireland – the majority of which is cutaway bog.

Bord na Móna has already announced that it is accelerating its decarbonisation which will evolve over the next decade.

Conaty continued: “There appears to be a misconception that Bord na Móna will close the gates on these bogs and walk away but that will not be the case.”

He says the company has been “maintaining” these bogs for the last few years and is in prime position to maximise their potential.

Bord na Móna’s head of land and property went on to say that while the maintenance of the bogs and peatlands has been on-going for some time now, the effort is operated by licence – one that is issued by the Environmental Protection Agency (EPA).

And those guidelines appear to be tight.

Conaty continued: “Part of the process will include the re-wetting of bogs – that doesn’t mean that areas will end up being flooded. There is no doubt that areas of cutaway bog will naturally form wetlands; that will be achieved in a controlled way and with planning and risk assessment in place.”

Bord na Móna has just completed a rehabilitation process at a cutaway bog in Co. Mayo.

According to Conaty it has been a very successful venture and one that bodes well for the future.

“We have already been in Co. Mayo for the past few years and have controlled the rehabilitation of cutaway bogs there. There were no major changes in terms of the overall landscape and the project was very successful,” he added.

Back in the midlands the Bord na Móna expert points to the “large blocks of land” that can be found there.

“In the Shannon catchment area, for example, Bord na Móna owns just 2% of the land overall so the impact on rehabilitation in this catchment is minimal.

“There shouldn’t be fears that there will be major changes overnight – there won’t be sudden changes to people’s environment either,” said Conaty.

He went on to say that the company’s aim was to “stabilise” cutaway bog. He said this would be achieved through silt control and the re-vegetation of the peat.

“We also need to look at the drainage arrangements as well; if the peat is dry in windy periods that will create dust; therefore, that is a situation that will have to be monitored because we need to ensure that the peat doesn’t dry out too much,” Conaty continued.

“And because we are no longer milling peat that side of things will have to be stabilised.”

Bord na Móna plans to roll-out its renewable programme in the not-too-distant future.

Once that is done, adds Conaty, “a number of those cutaway bogs will be included in renewable projects”.

He says the company is currently carrying out a feasibility study in relation to aquaculture.

“We have a large area of land that has huge potential for something like aquaculture. We can’t say for certain – at this stage – whether or not this is something that will be rolled out but the feasibility study on this is being carried out and is going very well at the moment,” he continued.

We are also looking at the possibility of growing medicinal herbs and we also have a number of sites structurally located that can attract commercial potential.

The company also points to forestry.

“Forestry is something that we have already tried and there is the potential there for more of that; all of these plans will be part of a gradual approach – any further developments or plans in relation to the overall work being carried out will have to be done in conjunction with the EPA,” concluded Conaty. 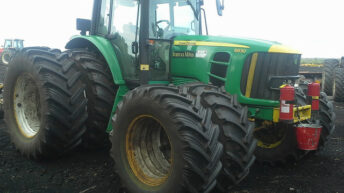