In the first three months of 2015 cow prices in the EU have started to recover, according to EBLEX.

The rise comes on the back of a decline of 12% in the average EU O3 cow price between April and December 2014.

It says that while some of the decline in 2014 can be attributed to the seasonal nature of the industry, the ban on exports to Russia had a significant impact.

The closure of the Russian market to beef from the EU impacted some EU countries more than others.

According to EBLEX cow prices in Germany and France, for instance, declined by 50c/kg in the second half of the year, while prices here in Ireland steadily increased during the same period. 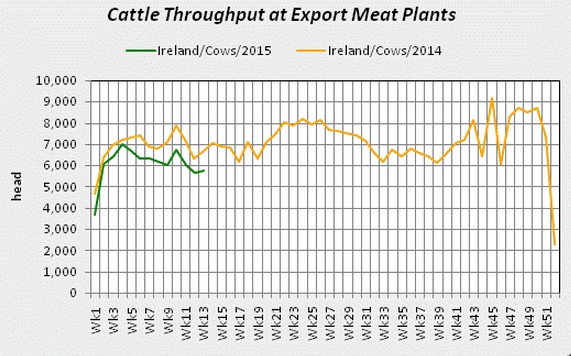 Since the turn of the year, however, it says the dynamics have shifted as recent developments within the EU provide support to cow prices.

EBLEX says prices in the UK performed quite well in 2014, with a good demand for cows in the domestic market. In the second half of 2014 sterling started to strengthen, making imports of beef into the UK market increasingly attractive amongst retailers and consumers.

However, it also says other factors have driven demand for cows in 2015, with stronger demand for cheaper cuts of beef post-Christmas, which continued well into March.

In more recent weeks there appears to be signs that this trend may slow down, especially with prices for prime cattle showing signs of weakening, which could lead to some product substitutions.

According to EBLEX, robust demand for cow beef in the UK market has seen an increase in cow throughputs in abattoirs throughout the UK, up more than 2,000 head in both January and February 2015 compared to year earlier levels.

It also says the increase in supply of cows for slaughter in the UK is currently being helped by challenging market conditions in the dairy sector, which has reportedly seen an increase in the slaughter of dairy cows.

In France, where beef production mostly consists of cow beef. According to EBLEX cow prices have also recovered, albeit at a slower rate.

During 2014, it says France lost its position of paying the highest prices for cows within the EU, which it had held since 2012.

EBLEX says this could be due to a greater availability of product in other EU member states, thus increasing the competitive environment for domestic production in France.

The O3 cow price in Italy, for example, was 280c/kg in the week ending March 28, compared to the cow price in France for the same week which was 315c/kg. Cow prices in Germany in recent weeks have also caught up with prices in France.

EBLEX says should UK consumers’ budgets allow more spending on prime cuts of beef and sterling remaining strong against the euro, we could see a reduction in demand for cows in the UK.

In contrast, it says cow prices in France for the latest week were 27c/kg less than in the UK, which could lead to an increased demand in this market.

According to EBLEX an increase in trade to France (which is the largest importer and consumer of cow beef in the EU) could also take place amongst other EU member states, whose cows are priced more competitively.