A farmer in the UK has proposed to his girlfriend in a very unique fashion: by spraying out the words ‘Di, will you marry me?’ into his wheat field.

Rick Davies from Clifton Reynes, Milton Keynes told One MK, the news website, that he used a quad-bike and weed-killer to ask his girlfriend to marry him.

Speaking to the news website, Davies said that he had been thinking for about a year how he was going to ask her.

“Then I won a flight at a charity auction for £50. After about two weeks it suddenly came to me that I could write it in the crops and we could go up in the plane.

“I used a weed killer that was sprayed onto a quad bike and I just spelled it out. But I had to leave it at least a week before we flew up, so I did it the week before the flight on May 4,” he said.

Davies said he was nervous about the plan working out but he said it worked out better than he had hoped.

Davies runs the farm with his father and they supply flour to Tesco. His father was away when he spelled out the proposal.

“Looking back I was more nervous doing that than I was when we went up in the plane. If it was a mess I would have been a bit of a laughing stock!

“No-one knew what I was doing, not even the pilot, so it was a big shock and he didn’t really know what was going on,” he said.

Diana Cull, Davies’ girlfriend, started crying when she saw the proposal in the field, but his efforts paid off as she said ‘yes’.

She told One MK that it was “the most fantastic moment” of her life.

“He is very romantic. I am the luckiest lady alive,” she said.

The couple have already set a date of July 9, 2016 and plan to keep the wedding local, the website reports. 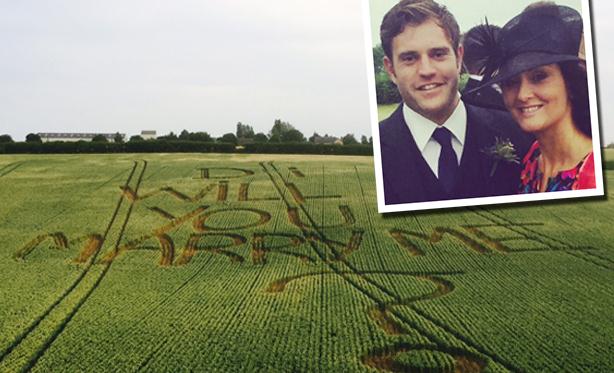 Video: A bride arrived to her wedding reception on a transport box

More thunderstorms on the way as another warning issued

‘Burren in Bloom’ to take place online this May

More thunderstorms on the way as another warning issued

‘Burren in Bloom’ to take place online this May