The cost in making a will in Ireland can vary from €50 to €150, a nationwide survey of legal costs for making a will by the IFA has found.

The overall results of the national survey show that the average legal cost of making a will is approximately €95, the IFA says.

IFA’s Inputs Project Team Chairman James McCarthy has encouraged farmers to shop around ensure that they are getting competitive rates when making a will.

“The cost of making a will ranges from €50 in counties such as Roscommon, Limerick, Wicklow and Galway to €150 in Donegal, Kildare and Kilkenny.

This represents a 300% difference and IFA members should ensure that their legal charges are not excessive.

This means that Kildare, Kilkenny and Donegal are paying 58% more than the average, as the average legal costs for making a will in these counties is €150 according to the survey.

It found that the cheapest fee in order to make a will was €50, in counties Galway, Kerry, Limerick, Longford, Roscommon, Tipperary and Wicklow.

He said that while the IFA does acknowledge that it does take time to create a will, the price difference is very significant.

“The price range seems unjustifiable, with some firms even saying they may do wills at no cost, if the clients are regular ones or if they were in financial difficulty,” he said.

McCarthy said that each person has their own affairs and circumstances, but it appears to be worth shopping around when choosing which solicitor to use. 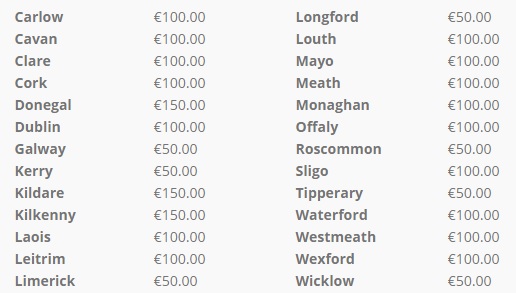