Recent comments made by the Irish Farmers’ Association (IFA) regarding a Department of Agriculture review of the beef grading system have been labelled as “self-serving” and “fake news” by Minister for Agriculture, Food and the Marine Michael Creed.

Speaking to AgriLand in Seoul, South Korea, at the launch of the new €3.9 million EU Pork and Beef campaign yesterday, Thursday, June 14.

“There is no proposal by the department published at this stage to change anything,” the minister asserted.

So to present this [is] maybe self-serving by some of those who are talking about it as getting media coverage for something that’s basically untrue.

“We have been conducting reviews and research on these matters but no matter has been finalised; so to make the allegation that the department is skewing the grading system in favour of factories is basically fake news,” the minister said.

Last week, IFA national livestock chairman Angus Woods referred to a proposal from the Department of Agriculture to change the equations in the classification machines at meat plants, alleging that the proposal “rewards factories over farmers and is totally unacceptable”.

“The department proposed changes to the machines, which will reduce conformation scores on cattle, will take money directly out of beef farmers pockets and is totally unacceptable.”

Woods said that, according to the information presented by the department, the output of the trial of the new equations will “result in a significant reduction in the conformation scores of cattle slaughtered in Ireland, which will reduce the price paid to farmers”.

The department trial conducted in Slaney Meats was originally set up to assess new lighting and camera technology for the mechanical classification machines.

It was “never a requirement to change or interfere with the accredited equations which determine conformation and fat score”, according to the IFA chairman.

Woods said the department wanted to change the equations for conformation and fat score “because of the changing profile of the national herd”, labelling it as “wrong and totally unacceptable”.

In a statement to AgriLand from the Department of Agriculture, Food and the Marine, the department confirmed that it recently supervised a modification trial of the mechanical beef carcass classification system to ensure compliance with EU legislation.

This is currently being reviewed and will be published in due course on the department’s website, the statement concluded. 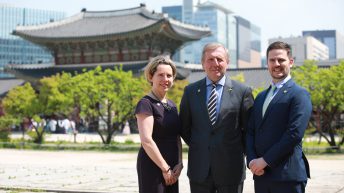