The Minister for Agriculture, Food and the Marine, Michael Creed, will publish the names of the factories that have been fined for excessive carcass trimming, it has been confirmed.

In a statement issued late on Wednesday night, December 12, Minister Creed said: “My department will publish the names of plants in which on-the-spot fines have been applied with effect from January 1, 2019.

I also intend to publish the names of plants in which such fines were levied in 2018 and 2016 before year end, subject to the completion of a number of formalities.

Minister Creed has also confirmed that he will roll out enhanced controls on carcass trimming in factories from the beginning of next year.

In addition, the minister has stated that processors will introduce a payment to the affected farmer supplier to reflect any losses incurred.

The statement comes following a “sit-in” by members of the Irish Farmers’ Association (IFA) – including its National Livestock Committee – at Agriculture House on Kildare Street in Dublin in response to the escalating scenario.

It is understood that talks were held between the farm lobby group and department official in the late hours of Wednesday, December 12.

The department has stated that the new monitoring system of inspection is being trialed at a number of factories before being fully implemented.

It involves staff from the Veterinary Public Health Inspection Service assisting staff of the Beef Carcass Classification Unit to provide “additional assurance” in relation to the regulation of trimming of carcasses by factories.

In a statement on Wednesday night (December 12), Minister Creed said:

This new system of controls in processing facilities, with 150 personnel specifically trained to provide additional support in carcass classification, has been established to provide farmers with absolute assurance that the appropriate dressing is being applied.

At the protest on Wednesday, IFA president Joe Healy mounted pressure on Minister Creed to fully identify the 19 meat processors that have been involved in cases of excessive carcass trimming so far this year.

IFA National Livestock Committee chairperson Angus Woods outlined that farmers who had been affected by such practices “have a right to know” which factories were at fault. 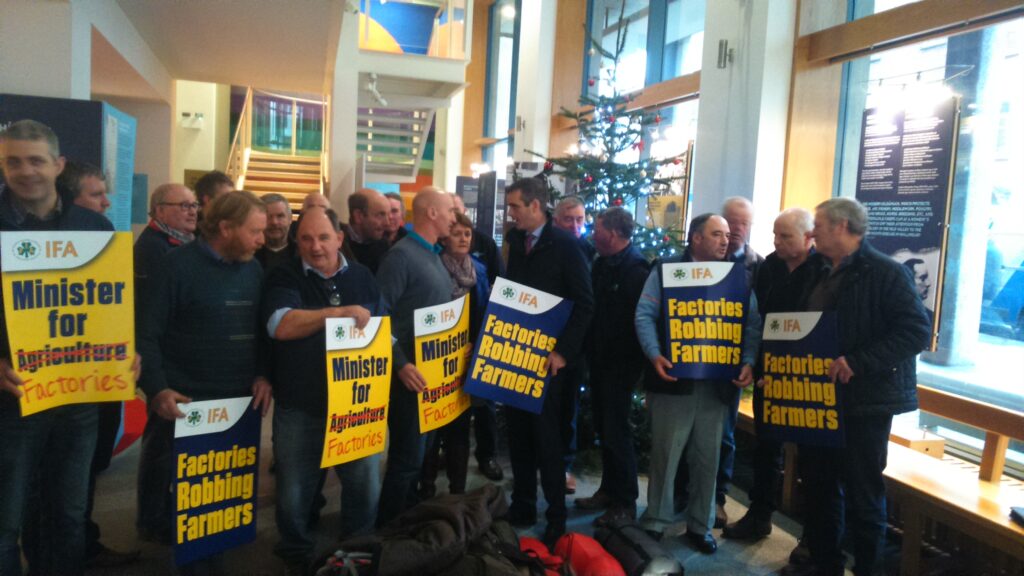 Following late night talks between the farm lobby group and department officials, the IFA welcomed the minister’s decision to identify the factories guilt of trimming offences.

The IFA issued a statement saying: “Following negotiations, agreement has been reached between the IFA and Minister for Agriculture Michael Creed in relation to the publication of the factories which committed trim offences.

From January 1, 2019, the names of the factories which commit trim offences will be published each quarter on the Department of Agriculture website.

“The farmers impacted will be informed and they will be fully compensated by the factories.

“The minister has also made it clear that it his intention to publish the names of the 19 factories who committed offences in 2018, and the 28 offenders in 2016, before the end of this year.”

The IFA stated that the minister has also confirmed that he, and his officials, will continue to reject any attempts by the EU to place further restrictions on the live export trade.

“The minister made it clear to the IFA that he is totally committed to the live export trade.

“Following this agreement, the IFA sit-in at the Department of Agriculture, Food and the Marine in Kildare Street has ended,” the statement concluded.

Carcass classification and carcass presentation (trim) controls in slaughter plants are carried out by a team of specialist staff in the Beef Carcass Classification Section within the department.

The department’s remit under EU legislation is to carry out unannounced inspections to ensure that meat plants comply with these legislative requirements for classification, weights and trim.

The EU legislation states specifically that the reliability of the classification of carcasses (and monitoring of carcass presentation) of bovine animals should be verified by regular on-the-spot checks carried out by bodies that are independent from the inspected establishments responsible for the classification, the classification agencies and the qualified classifiers. 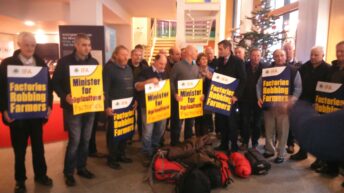