Cows to conifers: ‘Food is not the priority – I’m farming for air’

It was the spring of 2012 – one of the wettest years in Irish history.

After much soul searching, Gerard Deegan – a then large-scale organic dairy farmer based in Cooksborough, Cloghan, Co. Westmeath – finally made a decision about the future of his 140ac holding which comprises rolling hills and vast pastures on the margins of Mullingar town.

He had started out foddering with an ass before going to school many moons ago, but over the years the pace of milking had moved to the other extreme.

At an age when he presumed things would naturally slow down, he found himself racing to build slatted sheds, take three cuts of silage, buy cattle, sell cattle, borrow money and compete against herd sizes going up and up and up.

Although his switch from conventional to organic dairying in 1999 left more money in the kitty and decreased on-farm pressure levels, long term he couldn’t foresee a meaningful payback for all his efforts.

The bachelor farmer frequently asked himself: Where will it all end up? And, ultimately, who is in control of the profitable homestead that his family had built over generations?

This “awakening” as he now calls it, allowed him to see the wood from the trees. 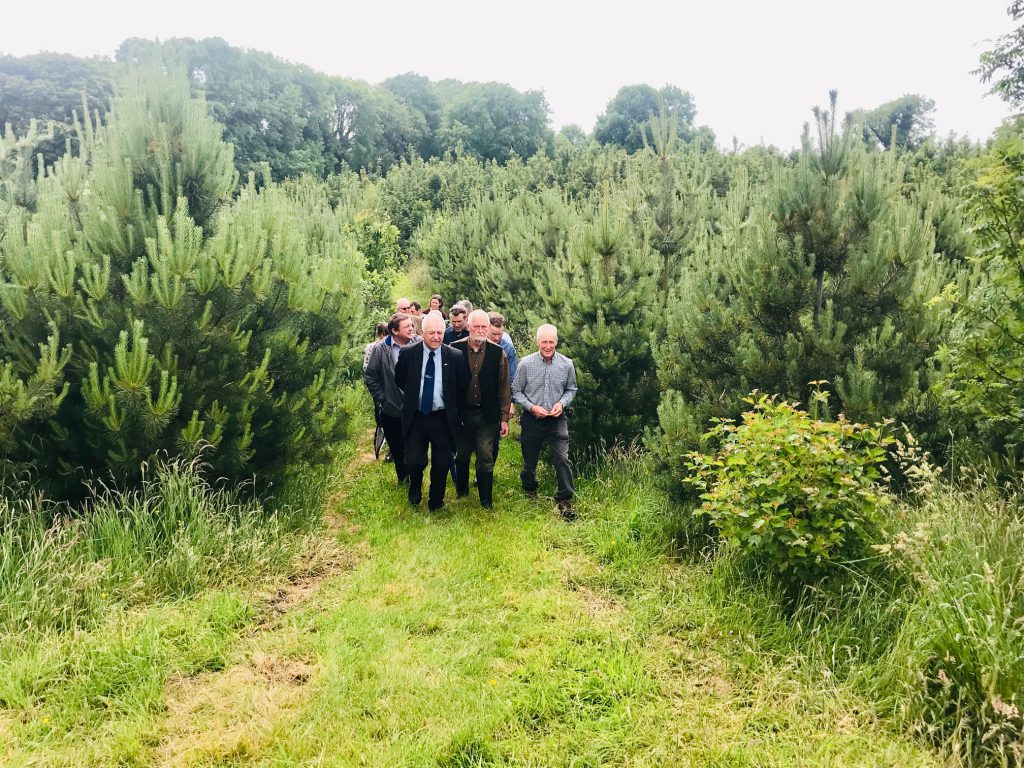 “In 2012 I decided to change. There was a multitude of reasons, everything came to a head at that stage. I have no family, I have no kids coming on, so there is nobody to take on the running of the farm.

“Due to health reasons too I had an awakening. You become more vulnerable and you start to realise that you’re not going to go on forever.

“I thought maybe at that stage I would grow old gracefully and that every year I’d be able to do a little less – but it doesn’t work out like that.

Although Gerard was making money at milking, whilst also managing a calf-to-beef system, he felt he was constantly being squeezed for more.

“If you had a good year then you’d spend it that year, so the following year I needed to be milking again. If I’m not then there is no income coming in because nobody is going to give me any income either.

“With PRSI I can’t go on the dole because I’m self employed, so I’m up the creek if I’ve nothing coming in,” he said.

The amount of “red tape”, administration, rules and regulations intertwined with farming today also got under his skin.

I’m 60 years farming and yet there’s no end to people telling me how to rear a calf.

“Now farmers have to go and write down everything to prove to somebody else that they can farm.

“The inspectors come in; some are fine men, but others really are on you. It’s never good enough, one man comes out and he tells you to do this and he might be all smiles – but at the end of the day, who has the power if I don’t go and do what he says?

“I’m under a barrel; I have to do what he says. Then, another man could come in the next day and tell me something else. It’s just push, push, push.

With the stress of that, I nearly had a heart attack. A close friend of mine died, suicide, because of the pressure from worry about farming.

“Some can let go, but I can’t because I like to always do my best. I like to do it right. It’s everywhere, every job, every walk of life, it’s not just farming.

Part of the farm

Gerard decided to get out of milking altogether and opted to plant 75% (100ac) of his farm using around 60 different species of trees.

As it stands Gerard says he currently receives a payment of approximately €200/ac.

Long term his intention is not to clear-fell everything; but rather to implement an approach of regeneration whereby the best trees would be taken out and the growth of smaller trees would be encouraged.

He hasn’t looked back.

In the run-up to the big plant, Gerard worked closely with Teagasc forestry advisor Liam Kelly and local forester Bernard Kiernan to design a comprehensive site that would ensure that the woodlands would be very much part of the farm.

Paying close attention to detail, Gerard had a clear vision that he wanted to select a mixed composition of trees – including conifers (mainly Norway spruce) with some Scot’s pine and European larch, alongside broadleaves (predominantly ash, oak, beech and sycamore).

The team ensured that the woodlands would be interlinked with the rest of the farm by installing access paths between the species – which were planted in blocks. 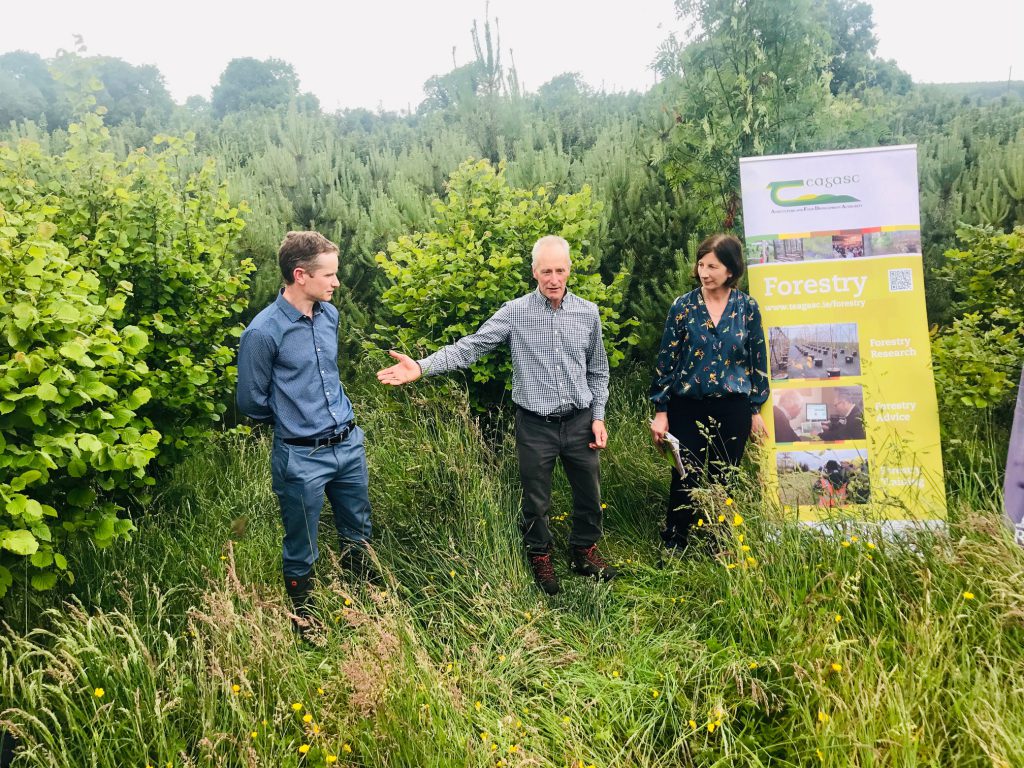 Today, the tracks and field headlands are fully maintained by topping two to three times a year allowing ease of access at all times.

He continues to farm 30ac where he keeps an organic suckler herd, with a calf-to-beef enterprise.

He has also doubled his poultry numbers – including: hens; broilers; geese; turkeys; and ducks – which he rares organically, along with some pigs, and sells into the local market.

Gerard is also involved in Social Farming Ireland. This venture offers people that avail of social services in Co. Westmeath, including those with an intellectual disability, mental disorder, dementia or any other issues, an opportunity to spend a day contributing to work on the farm.

He has found the experience of helping others hugely rewarding. 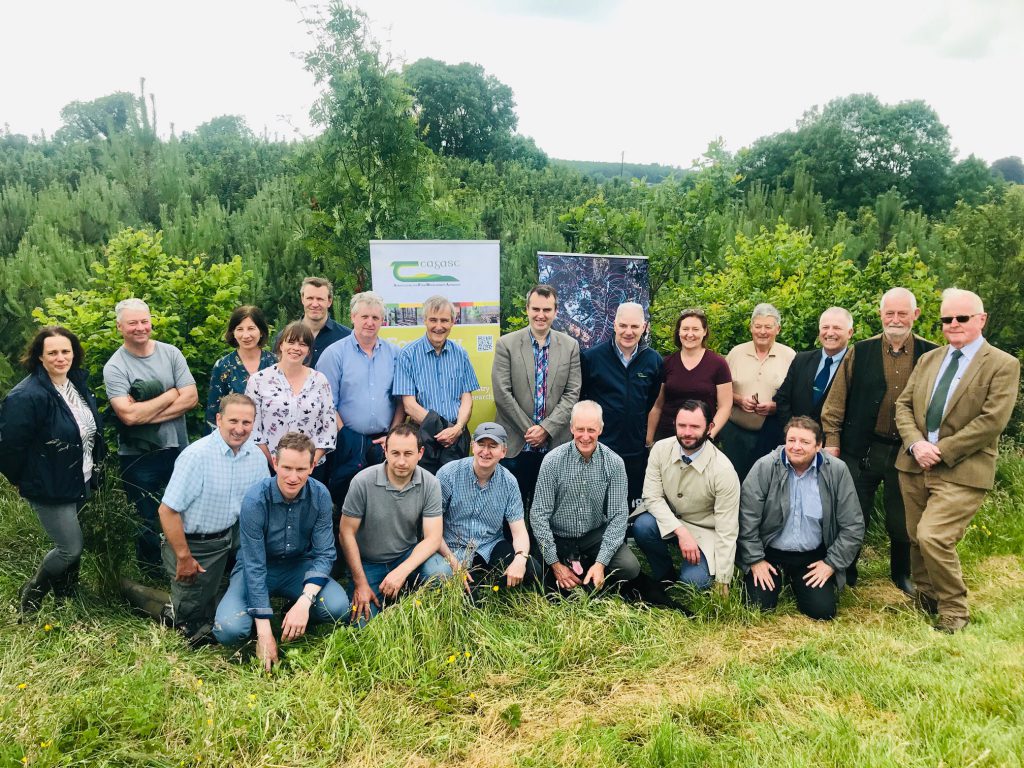 “They either help out on the yard, or we go up to the forest. Just to walk in it, the level of peace and tranquility that brings for people with an intellectual disability is incredible.

“I even had a young lad here that had been fostered four or five times and he doesn’t want to go to school and just to get out there and feel that he is doing something, clearing a line for the path, the forestry means so much to these people.

“They are not going to make a fortune; but they have a life and I have a life. A friend of mine gives me a hand here on the day and that’s what we talk about afterwards, it’s not the other four of five days in the week and what we did and didn’t do it.

It’s about having the craic with these people and that is the most important thing in life; it’s gone to hell racing, racing, racing – and for what?

“That was one of the reasons I got out of farming – I probably wouldn’t be alive; I was on the verge, but this forest saved my bacon and I would hate to see this going in the same direction with regulations. We can’t afford to go there. 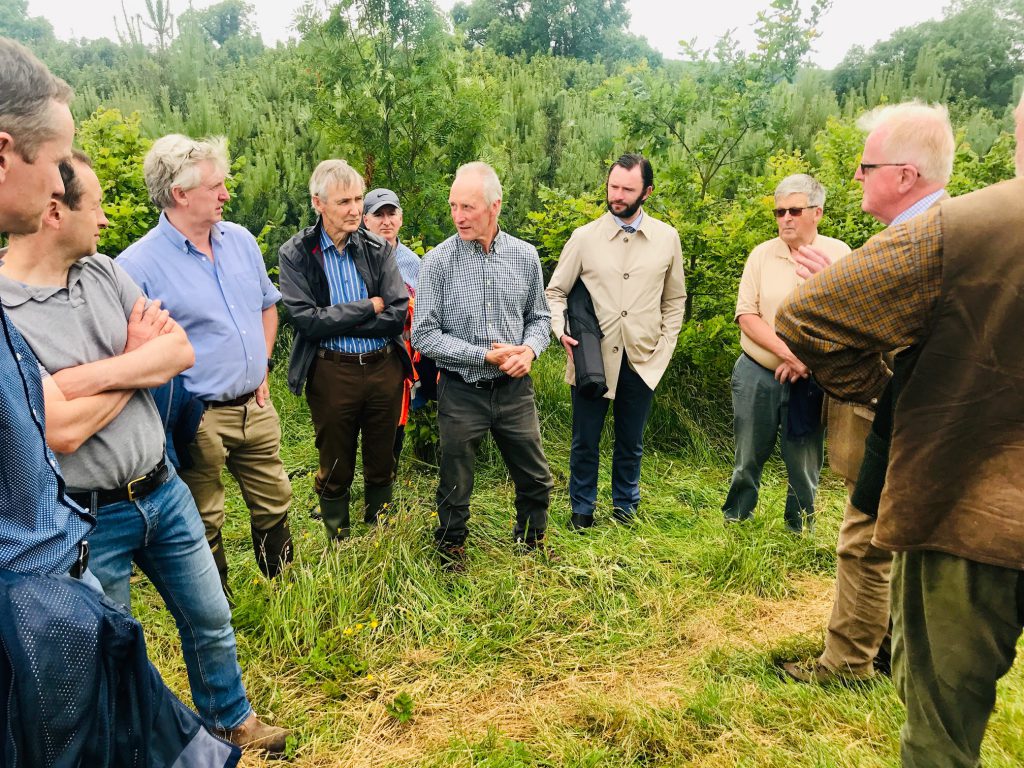 Gerard said, in a few years’ time, it will be the ordinary people that “want to come up here because there will be no jobs left”.

“It’s all about computerised equipment; computers are taking over the ordinary work and that’s all the ordinary man or woman wants to do, to do something and feel meaningful in life – it doesn’t matter how basic it is.”

Gerard empathises with the amount of pressure young people – particularly those involved in dairy farming – are putting themselves under.

The young people today want to get going, they are full of enthusiasm, but they are being sucked into borrowing money that I’m afraid they will never be able to pay back.

“It’s like a noose around their neck forever and a day and it’s not right.

Earlier this year, Gerard was awarded the RDS Farm Forestry Award at the 2019 RDS Spring Awards ceremony in Dublin.

The award, sponsored by Teagasc, aims to recognise excellence in sustainable use of land that incorporates both farming and forestry through the successful adoption of a whole farm planning approach.

During a special walk of his farm this week – attended by Teagasc director Prof. Gerry Boyle and the RDS forestry award judges – Gerard highlighted that the narrative around “pushing” farmers into forestry must stop.

“All the farmers are dead sound; they want what’s good for nature, what’s good for the environment, but they need to be given a chance to express that themselves. If they are constantly being told what to do it is not going to work.

There is a lot of aggro out there; a lot feel that way. Thankfully here I have not had that and I took an interest in it as well, and I was given a chance to do that.

“Yes, we need to see more forestry; but we need more cooperation allowing farmers to try things as well – nobody knows it all here. We all have to try and do our best and it will happen.

“Dairy farmers will come once they know it’s an enhancement of what they are at, not that they have to do it because of carbon sequestration or because the world is going to blow up. 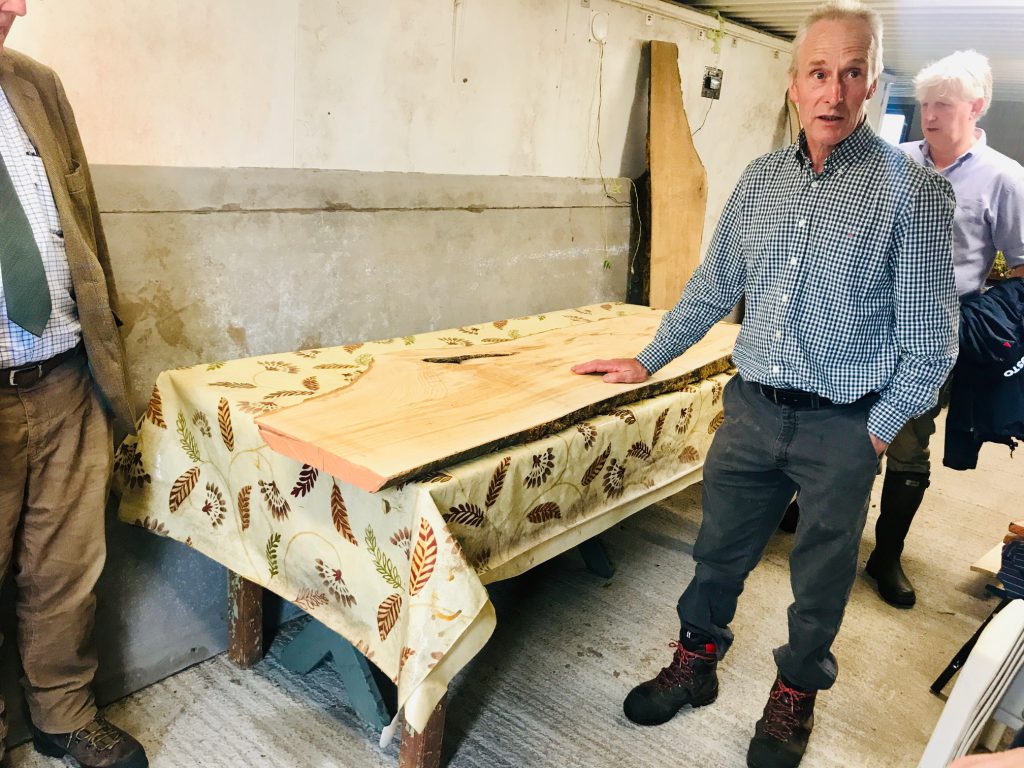 “But, the farmer needs to know that they are the one doing it, not that they are being told to do it or else you won’t get a subsidy or x, y or z. That won’t work – lads will revolt against it.”

Gerard says his neighbours have been supportive of his venture into the woods.

“I’ve had no adverse comments; at the time 2012 was one of the wettest years on record and I think people saw the method in my madness.

“Fortunately, there is no house nearby, there are green fields all around me, I’m not up against anyone’s face. 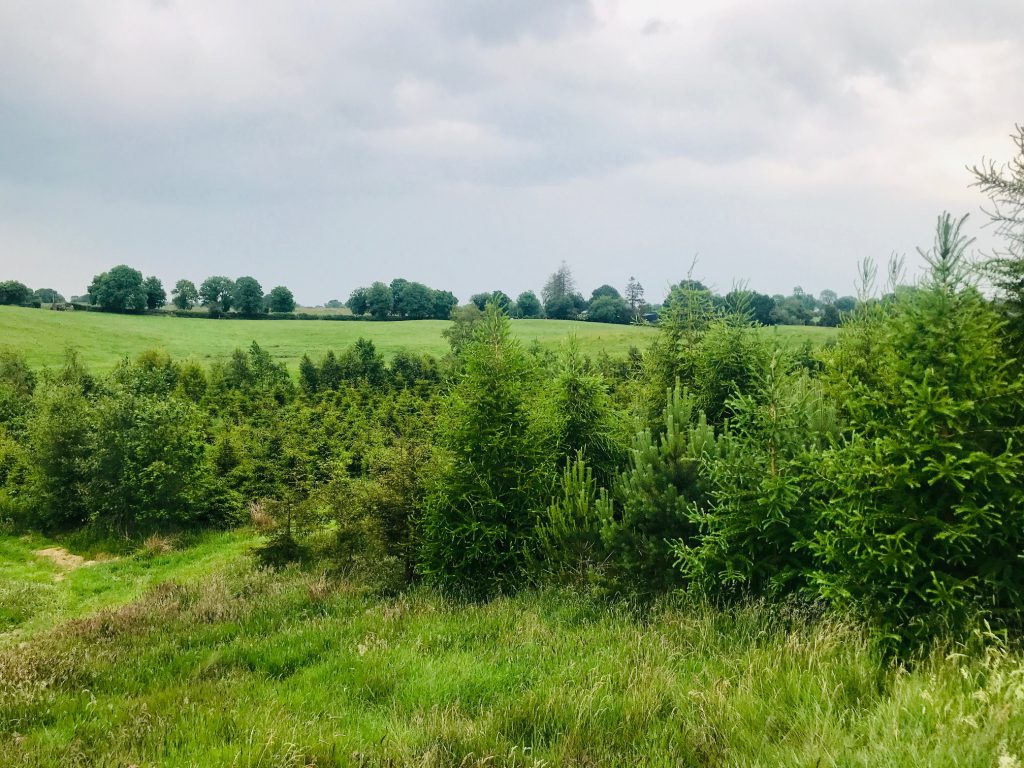 “Even the view, if you are over the far side of the road, it’s lovely to look at. It’s not just one green block, it’s broken up – it’s visually appealing.

“You might get some lads that are dead against forestry; but I would say to them the most important thing at this moment in time is water and air.

Food is not the problem; we are wasting a lot of food. Food is not number one on the priority list.

“If we get the water and the air right maybe in 300 or 400 years’ time there will be new laws and we can dig up forestry if we want new land again; but at this moment in time I am farming for air.

“We should get credits for carbon sequestration of the air, that’s what we need at this moment in time, it’s as important as food,” Gerard concluded.