Cool, largely dry conditions are expected over the coming days, according to Met Éireann.

Later this morning, frost and any mist or fog patches will clear to give a mainly dry day with some sunny spells.

A few light showers may develop, most likely in Ulster and coastal parts of Leinster, the meteorological office adds.

Highest temperatures of 8° to 11° are expected with moderate northerly breezes.

Tonight will be cold and mainly dry with some clear spells and a few patches of mist or fog. Lowest temperatures of -1° to 3° are expected, with frost in places.

Drying conditions will be moderate or good over the coming week, but poorer in some Atlantic coastal counties, which are expected to receive between 60% and 90% of normal rainfall.

Meanwhile, there will be good opportunities for spraying in all areas for the next few days, with little rain and relatively light winds forecast, though it will be chilly for the time of year.

Regarding field conditions, poorly-drained soils are saturated in the north-west and parts of Kerry but this is expected to improve over the coming week.

Tomorrow will continue mainly dry with a fair amount of cloud and some sunny intervals, Met Éireann says. Highest temperatures will reach 9° to 11° with light to moderate north to northeast breezes.

Tomorrow night will be cold and mainly dry. There’ll be some clear spells, but a fair amount of cloud will be present also with some patches of mist and drizzle. Lowest temperatures of 1° to 4° are expected.

Wednesday will be mainly dry and mostly cloudy, the forecaster says. The best of any sunny breaks will be in the east and south.

It will be cloudier in the west and north, with the potential of the odd light shower. Highest temperatures will peak at 7° to 10° with moderate north-west breezes.

Wednesday night will be mainly dry, the office says, but rain will develop in the north-west overnight. Lowest temperatures will drop to 1° to 4°.

Thursday will start off dry in the east and south. However, small outbreaks of rain and drizzle in the west and north will gradually spread southeastwards through the day.

Highest temperatures of 9° to 11° are anticipated with moderate to fresh west to north-west winds. 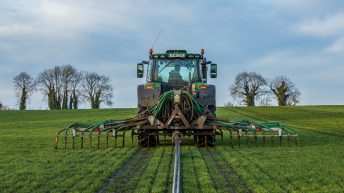 What fertiliser do I need to spread to grow a crop of first-cut silage?