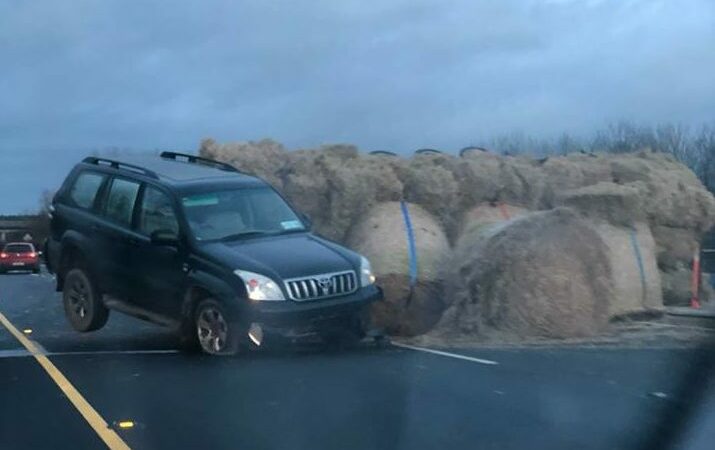 A large load of hay bales came crashing down onto a busy motorway following a collision in Co. Kildare earlier this week.

The incident occurred on the M7 Dublin-Limerick motorway last Wednesday morning (January 31), according to multiple reports.

As can be seen in the above image, a trailer-load of hay bales appears to have overturned on the motorway, spilling some of its hay. A Toyota Landcruiser looks to have collided with the trailer, causing some damage to the 4X4. The image was posted by ‘4X4 off road Ireland’ Facebook page.

According to AA Roadwatch, the trailer shed its load on the M7 northbound road between Junction 12 (Newbridge) and Junction 11 – the merge for the M9 Dublin-Waterford motorway.

#KILDARE A trailer has shed its load on the M7 northbound between J12 Newbridge and J11 the M9 merge. Traffic slow on approach. https://t.co/PSzIBsvOzE

Occurring on the northbound route on a busy Wednesday morning, the incident blocked the route while the debris of bales and hay were cleared.

According to AA Roadwatch, both northbound lanes reopened about an hour after the incident was reported.

KILDARE: Both lanes of the M7 northbound have reopened following an earlier incident before J11 The M9 Merge. https://t.co/ipFDM8svNY

This collision caused long delays on the route according to local radio station KFM, which stated that the lorry in question lost its load, or jackknifed.

Fortunately, there were no reports of any serious injuries or deaths from the incident; while it is a costly misfortune to happen to the unlucky people involved, it could have been an awful lot worse.